In most countries, traditional parties are seen in a more favorable light than populist parties. Public attitudes about parties – whether traditional or populist – are usually closely related to left-right ideology.10 People on the left tend to support parties on the left, while those on the right tend to favor right-aligned parties. Still, within these left-right differences, opinions of traditional parties follow a consistent pattern: People in the mainstream usually have more favorable views of these parties than people with populist views. Opinions of populist parties follow the opposite pattern: People with populist views tend to see the populist parties more favorably than those in the mainstream.

Traditional parties in Western Europe are seen in relatively favorable terms in Denmark, Sweden, Germany and the Netherlands (see the text box and Appendix B for more on how parties are classified). In each of these countries, half or more of the public has positive opinions of all traditional parties asked about. For example, a majority of Danes have a favorable view of the left-leaning traditional party, the Social Democrats (66%), and the right-leaning Liberal Party (55%).

To group political parties for analysis across the eight Western European countries, we divide parties into traditional and populist parties. We define traditional parties as those that have led the government – whether as president, prime minister or chancellor – at least once during the past 25 years, have competed in at least two national elections and still compete in elections today.

Populist parties are those that display high levels of anti-elite rhetoric and express a preference for direct democracy, according to the Chapel Hill Expert Survey (CHES). This survey asked regional experts to evaluate the party positions of 132 European political parties with regard to their left-right ideological leanings, key party platform positions and degree of anti-elitism, among other things. We also use the CHES to further group traditional and populist parties by ideology.

Finally, we discuss two political parties that are neither traditional nor populist, but that garnered at least 10% of the public’s vote in the most recent election preceding the survey and with which 15% or more of respondents identify as partisans. We analyze this subset of parties as a separate group called “other key nontraditional parties.”

For more details on how these party groups are defined and a list of where each political party is grouped, see Appendix B.

In Spain, Italy and France, only minorities rate any of the traditional parties favorably. In these three countries, about three-in-ten or fewer have a favorable view of the Socialist Party (PS) and the Republicans (LR) in France (26% each), the Democratic Party (PD) and Forza Italia in Italy (30% each) and the Popular Party (PP) in Spain (31%), which is sometimes called the People’s Party.11 Only the Spanish Socialist Workers’ Party (PSOE) has moderately broad appeal – yet even then, fewer than half of Spaniards view the party favorably (44%). 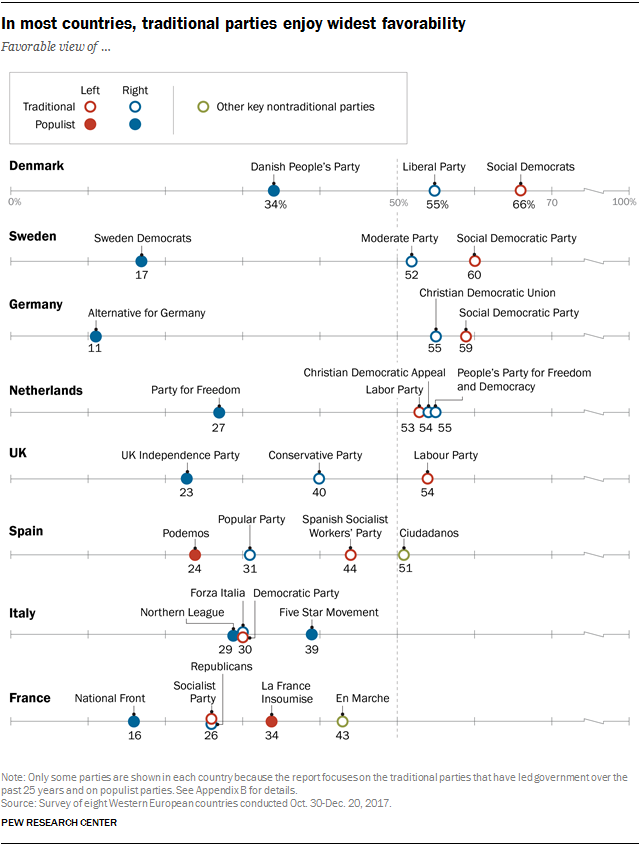 In all countries surveyed, people on the right tend to have more favorable opinions of right-aligned traditional parties than people on the left, and vice versa. This general pattern holds for both people who have populist views and people in the mainstream. However, to the degree that respondents with populist sympathies differ from mainstream respondents, populists tend to give lower favorability ratings to traditional parties.

One clear example of this pattern occurs in the Netherlands. A majority of people on the left have a favorable view of the left-leaning Labor Party (PvdA). Fewer than half of either group on the right have positive opinions of the party. However, Left Populists (57% favorable) have a lower opinion of the party than the Left Mainstream (76%), and the same is true when comparing Center Populists with the Center Mainstream (44% to 59%, respectively). Right Populists and the Right Mainstream have similarly negative views of the left-leaning PvdA (45% and 43%, respectively). 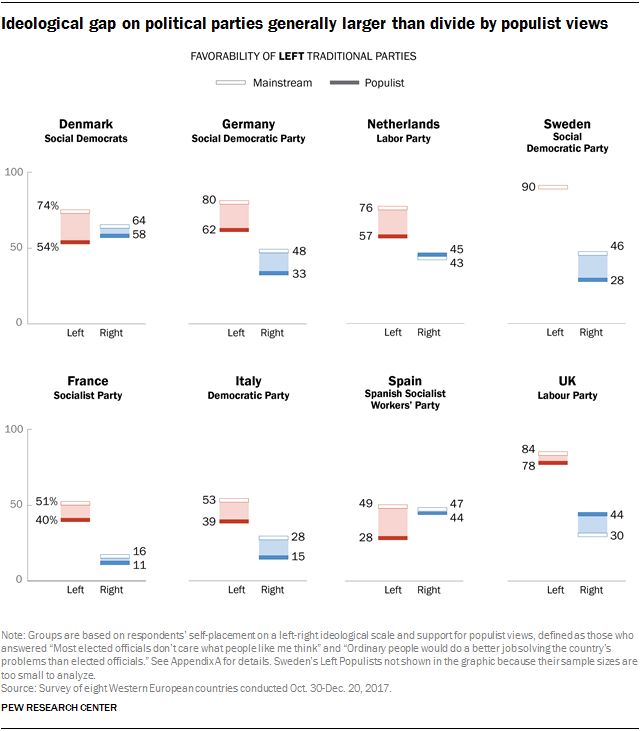 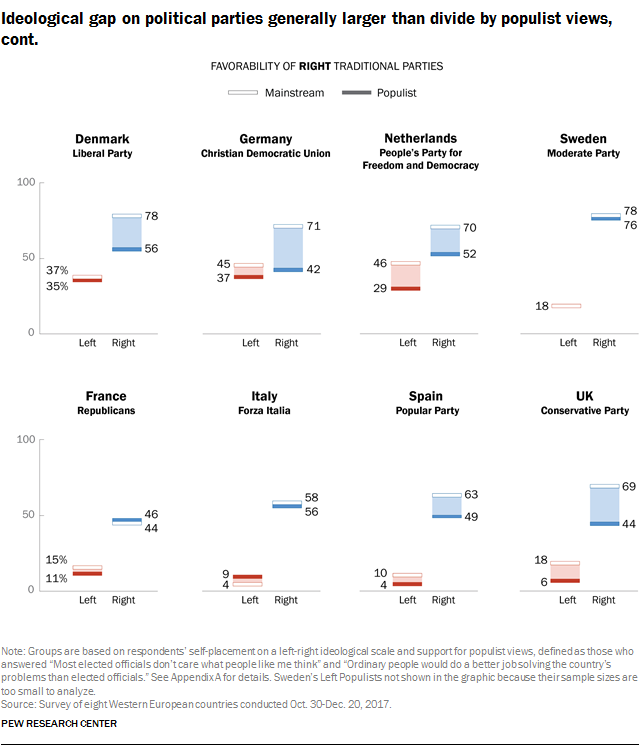 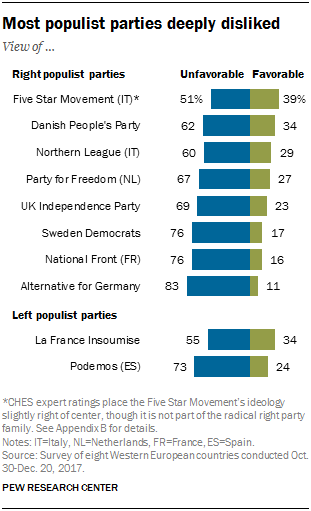 Across all countries, most populist parties – meaning those that are rated as anti-elitist by experts – are broadly disliked.13 Only minorities have a favorable view of these parties, ranging from 39% of Italians who have a positive view of the Five Star Movement to 11% of Germans who hold a favorable view of Alternative for Germany (AfD).14

For most of the populist parties on the right that were asked about, two-thirds or more of the public say they have an unfavorable view of each party. And, in the case of the UK Independence Party (UKIP) (49%), the Sweden Democrats (51%), the National Front (FN) in France (53%) and AfD in Germany (62%), about half or more express very unfavorable views of the parties.15

Italy’s Five Star Movement is relatively well-regarded among populist parties on the ideological right, receiving the highest favorability of all parties asked about (39%). But Five Star is also one of the few right-aligned populist parties that experts do not classify as “radical right”; rather, the party is relatively centrist in its ideology.16 Still, more Italians have unfavorable (51%) than favorable views of the party.

A majority of the French and Spanish publics also dislike the left-aligned populist parties La France Insoumise and Podemos, respectively. Fully 46% of Spaniards have very unfavorable opinions of Podemos.

Populist parties receive higher ratings from people with populist views, but many parties still only have minority appeal 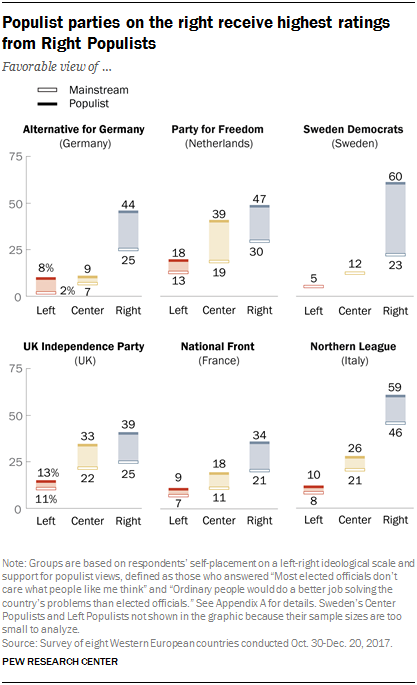 Views of populist parties follow the same general pattern as views of traditional parties: Whether populists or in the mainstream, people are more favorable to parties that fall on the same side of the left-right ideological spectrum as they do. But here the dynamics around populist views of parties are flipped, in that people with populist sympathies are more favorable toward these populist parties than are people in the mainstream.

For example, 44% of Right Populists in Germany have a favorable opinion of AfD, compared with just 25% of the Right Mainstream. Both of these right-leaning groups give AfD much higher ratings than either group on the left – whether Left Populists (8%) or the Left Mainstream (2%).

The two populist parties on the right that are somewhat less ideologically extreme – DPP in Denmark and Five Star in Italy – follow a similar pattern to the other populist parties, but they each stand out in an important way. 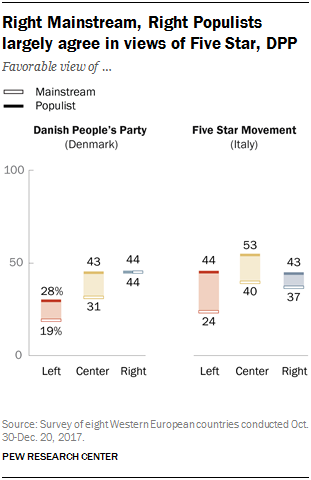 Unlike most other right populist parties, the DPP is viewed similarly by both the Right Mainstream and Right Populists in terms of favorability (44% for both). However, Danish Left Populists feel more favorably toward the party than the Left Mainstream (28% vs. 19%), as do Center Populists compared with the Center Mainstream (43% vs. 31%).

Five Star also has stronger support among those with populist views than among the mainstream. But, in contrast with most other populist parties, there is little difference between Left and Right Populists, with 44% and 43% holding favorable views of Five Star, respectively. In fact, Five Star’s base of support is strongest among Center Populists (53%). 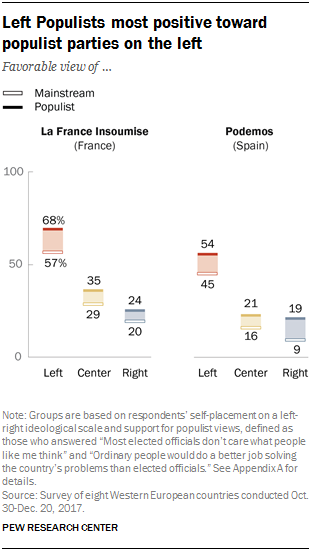 When it comes to views of populist parties on the left, they, too, receive more support from populist groups than mainstream ones. The left populist La France Insoumise gets its highest favorability ratings from the Left Populists (68%), although a majority of the Left Mainstream (57%) also hold a positive opinion of the party. But both of these ratings stand significantly above those of the right-leaning groups, where just 24% of Right Populists and 20% of the Right Mainstream express positive opinions of the party.

But, while populist parties generally receive more support from those espousing populist views than those in the mainstream, still, only some receive support from more than half of people who hold populist views. These include the left populist parties La France Insoumise and Podemos, which are viewed favorably by 68% and 54% of Left Populists in their respective countries. On the right, the Northern League (LN) and the Sweden Democrats each have majority support among Right Populists in Italy (59%) and in Sweden (60%), respectively. The Five Star Movement, too, is favored by 53% of Center Populists in Italy.

In France and Spain, other nontraditional parties are relatively popular 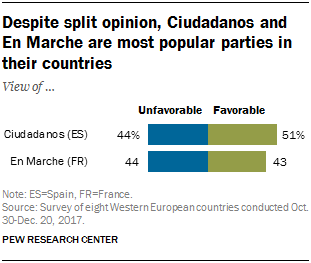 In France and Spain, newer parties have emerged into the national political landscapes in more recent years that have achieved relative electoral success and popularity.

These relatively new parties, En Marche and Ciudadanos, are more popular than any of the traditional (or populist) parties in their respective countries, with 43% of the French holding a positive opinion of En Marche and 51% of Spaniards saying the same of Ciudadanos. 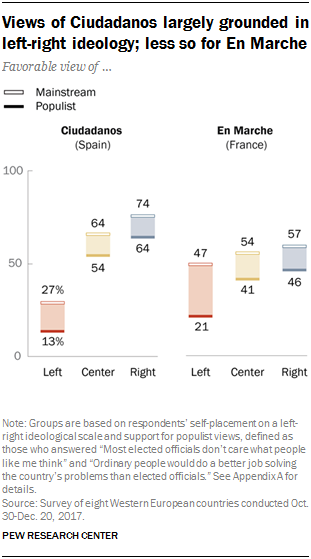 When it comes to how these parties are seen, the favorability pattern for Ciudadanos largely mirrors those of traditional parties. Views of the Spanish party are mostly driven by left-right ideology, and those in the mainstream tend to have more favorable opinions of Ciudadanos than those with populist leanings.

Views of En Marche, too, generally follow the traditional party pattern, with people’s views being shaped, at least in part, by left-right ideology. French adults on the right are more likely to have a favorable opinion of En Marche than those on the left; for example, 57% of the Right Mainstream express a positive view of the party, compared with only 47% of the Left Mainstream. And people in the mainstream groups are more favorable toward En Marche than those with populist leanings.

Next: Acknowledgments
← Prev Page
Page3Page4Page5Page6Page7You are reading page8Page9Page10Page11Page12Page13
Next Page →