This report identifies six key political groups across Western Europe based on people’s left-right ideology and their support for populist views.3 In all countries surveyed, minorities hold populist views, though these minorities are somewhat larger in Spain, Italy and France. Majorities in each country tend to be in the mainstream (defined as not holding populist views). A seventh group is the Unaligned – individuals who do not place themselves on the left-right ideological spectrum.

The political groups differ considerably from each other in terms of demographics. Populists tend to be less affluent and less educated than those in the mainstream, and they often express lower levels of political interest. In most countries, people on the ideological left tend to be younger than those in the center or on the right, with the Center Mainstream and Right Mainstream standing out as among the oldest groups in many countries. The Unaligned group is often the least affluent, least educated and least politically interested of all the groups. And unlike most other groups, which have similar gender balances, the Unaligned tend to be disproportionately female.

These groups differ widely from one another in their positions on various issues, too. The Right Mainstream stand out for the primacy they place on individual responsibility, while the Left Mainstream tend to support government involvement in the economy. Right Populists express the most skepticism of the European Union and its impact on their country, though Left and Center Populists also say the Brussels-based institution negatively affects their country’s economy at higher rates than those in the mainstream. The two groups on the right also tend to express more concerns about immigrants than those on the left, with Right Populists standing out as the most negative.

This report analyzes six political groups and a seventh group of Unaligned respondents. The groups are created based on two key dimensions: left-right ideological self-placement and populist views. Respondents were asked to place themselves along an ideological scale, ranging from far left (zero) to far right (six). Based on this self-report, people are classified as left (zero to two), center (three) or right (four to six). Those who did not offer an ideological self-placement are classified as Unaligned.

These three ideological groups are further divided by populist and mainstream views. The measure of populist views used in this survey is based on respondents’ answers to two questions: 1) Ordinary people would do a better job/do no better solving the country’s problems than elected officials and 2) Most elected officials care/don’t care what people like me think. Those who answered that elected officials do not care about people like them and who say ordinary people would do a better job solving the country’s problems than elected officials are considered to hold populist views; everyone else is considered to hold mainstream views. (For more details on how these groups were created, see Appendix A.) 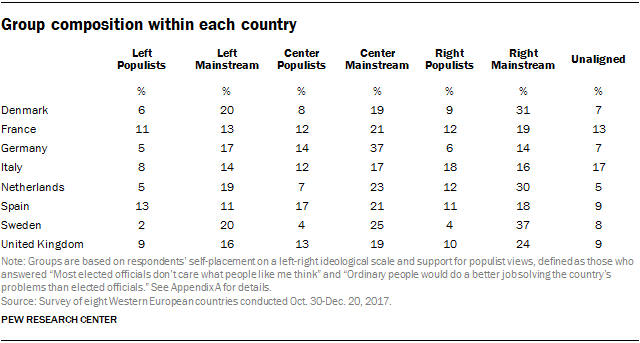 Right Mainstream: This group stands apart from others for the emphasis they place on individual, rather than government, responsibility in economic issues. Beyond this sense that the government should intervene little in the economy, the Right Mainstream also tend to be the most traditional on social issues of all of the groups, and they are relatively more negative about the impact of immigrants. Most in the Right Mainstream also have positive opinions of the EU’s impact on their country.

Right Populists: Right Populists stand apart from the other groups for their very negative attitudes about the EU and immigrants. For example, they are more likely to see immigrants as a burden on the economy, even relative to Left Populists and Center Populists, and majorities tend to think immigrants increase the risk of terrorist attacks. Right Populists differ little from the Right Mainstream on social issues. 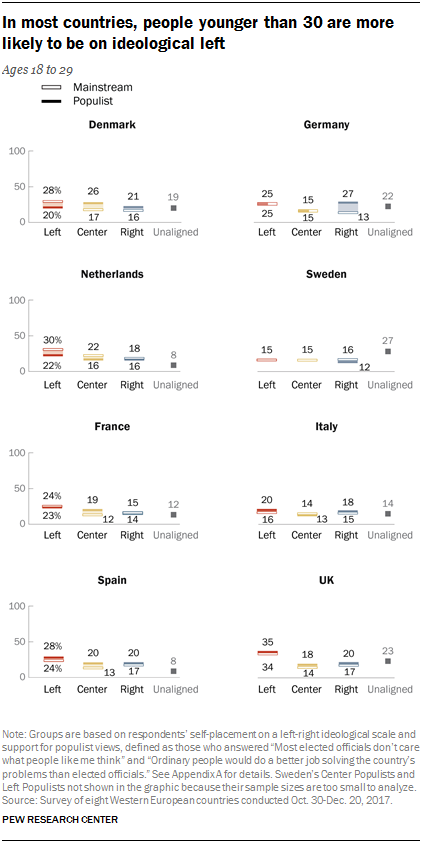 Younger people tend to fall on the ideological left

The seven groups differ considerably in age. In most countries, those on the ideological left tend to be younger than those in the center or on the right. These differences are generally larger than differences between populists and the mainstream. For example, in the UK, 34% of the Left Mainstream and 35% of Left Populists are younger than 30, compared with 17% of the Right Mainstream and 20% of Right Populists.

Populist groups, Unaligned tend to be less economically well-off and less educated than those in the mainstream

Populist groups are somewhat more likely to have experienced unemployment. For example, in Denmark, 37% of Center Populists say they or their family members have been unemployed or looked for work for more than three months during the past year, compared with 19% of the Center Mainstream. There are also smaller gaps of 11 percentage points between Left Populists (31%) and the Left Mainstream (20%) in Denmark and of 8 points between Right Populists and the Right Mainstream (24% vs. 16%). Aside from Germany, at least three-in-ten Left Populists have had some experience with unemployment.

People who endorse populist views and the Unaligned also stand out for having relatively lower incomes than those in the mainstream.4 For example, in the UK, 44% or more of Left Populists, Center Populists and Right Populists are lower income, compared with 28% of the Center Mainstream, 35% of the Left Mainstream and 41% of the Right Mainstream. The Unaligned tend to be among the least well-off of all the political groups; in all eight countries, roughly half or more have lower incomes, ranging from a low of 47% in Germany and Sweden to a high of 66% in Spain. By comparison, fewer than 40% of the Left Mainstream are lower income in most surveyed countries. 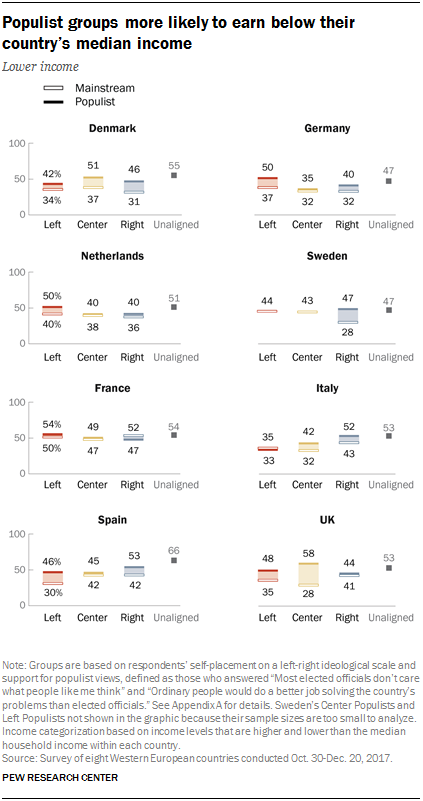 Finally, the Unaligned and populist groups also tend to be somewhat less educated than the mainstream. In the Netherlands, for example, 88% of the Unaligned have no postsecondary education. The same is true for around eight-in-ten of each of that country’s populist groups. In contrast, only 55% of the Left Mainstream and 66% of the Right Mainstream fall into this lower educational group.

While those with populist views on the left and right tend to have less education than those in the mainstream, this is particularly true of Right Populists. For example, in Germany, 84% of Right Populists have a secondary education or less, compared with 79% and 73% of Center and Left Populists, respectively. Among the German mainstream groups, around six-in-ten or fewer have a secondary education or less. Germany also exhibits a pattern common in most countries: The Left Mainstream tend to be the most educated. Around half of the German Left Mainstream (48%) have a university degree, compared with 36% of the Center Mainstream and 40% of the Right Mainstream. 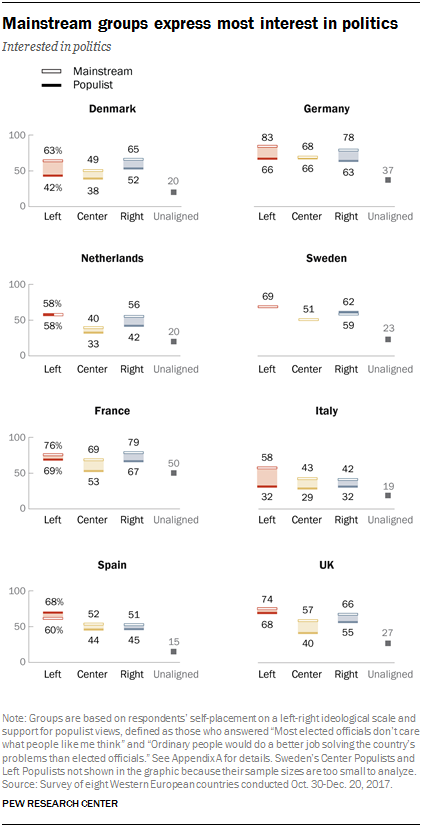 Western Europeans tend to be relatively interested in politics, with a median of 55% saying they are at least somewhat interested in the topic. This varies widely by country, however, from a high of 70% in Germany to a low of 37% in Italy.

The Unaligned are by far the least politically engaged among the groups in all countries. In Spain, for example, only 15% of the Unaligned say they are interested in politics – nearly 30 percentage points lower than the next-least-interested group in the country, the Center Populists. Perhaps reflecting its limited political engagement, the Unaligned group also stands out for having the most people who do not identify with any particular political party in their country. In six of the eight countries, the Unaligned group is at least 20 percentage points less likely to have a partisan identification than any other group in the country. For example, in Sweden, 69% of the Unaligned do not identify with a party, compared with 36% of Center Populists, the next most unaffiliated group.

People with populist sympathies tend to be less politically engaged than those in the mainstream. This is particularly the case for Center Populists. In six of the eight countries, fewer than half of Center Populists say they are interested in politics, with the notable exceptions being France and Germany (where 53% and 66% are interested in politics, respectively). Among mainstream groups, around six-in-ten or more in each country say they are interested in the topic, ranging from 58% in Italy and the Netherlands to highs of 83% in Germany, though interest is somewhat higher among the Left Mainstream. Center Populists also have the highest rates of partisan unaffiliation outside of the Unaligned.

When it comes to political interest, there are two exceptions. Whereas in many countries the Left Populists are among the least interested groups, in Spain, Left Populists are the most interested in politics, with 68% saying they are very or somewhat interested, compared with 60% or less in all other groups (such as 44% of Center Populists and 45% of Right Populists). In the Netherlands, too, Left Populists (58%) have high interest levels that mirror those of the Left and Right Mainstream (58% and 56%, respectively).

For information on which parties each group supports, see Chapter 7.