The Unemployment Blues: High as they are, measures such as the unemployment rate (9.7% in May 2010) and the median length of unemployment (23.2 weeks) still don’t fully convey the scope of the employment crisis that has unfolded during this recession. A broader measure from the U.S. Bureau of Labor Statistics that also includes involuntary part-timers and other marginal workers puts the combined unemployment and underemployment rate at 16.6%. And the Pew Research survey finds that among all adults in the labor force, fully 32% say that they are either now unemployed or that they had been unemployed for some period of time since the recession began.

The Long-term Blues: Of all currently-unemployed adults, 46% have been out of work for six months or more, by far the highest share measured by the U.S. Bureau of Labor Statistics in the post-World War II era. Short-term spells of unemployment typically do not lead to significant breaks in career paths or major financial losses—but long-term spells often do. 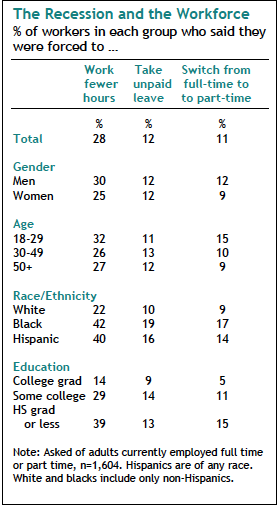 The Payday Blues: The unemployed are not the only ones hit by this recession. More than four-in-ten (42%) currently employed workers say that during the recession they have experienced at least one of the following: had their hours reduced (28%); had their pay cut (23%); had to take unpaid leave (12%) or saw their full-time jobs shrink to part time (11%). Workers across all demographic groups were affected, but these blows landed most heavily on minorities and workers with only a high school diploma or less education.

Career Impact: About a quarter (24%) of all adults—and 43% of all currently unemployed adults—say the recession will have a big impact on their ability to achieve their long-term career goals. Also, workers who lost a job during this recession but have since found a new one (26% of currently employed adults) are less likely than other workers to say they are satisfied with their job and more likely to say they are overqualified.

Next: VIII. The Recession Hits the Home
← Prev Page
Page1Page2Page3Page4Page5Page6You are reading page7Page8
Next Page →