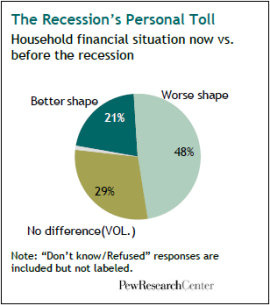 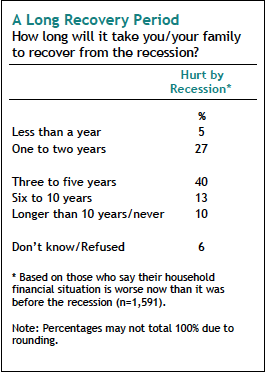 Many Foresee a Long Road to Recovery: Among those who say their family finances have lost ground during the recession, 63% predict it will take at least three years to recover. Blacks are more optimistic than whites that their recovery time period will be two years or less (55% versus 29%). Among college graduates who lost ground, fully 30% believe it will take six or more years to recover. Among those who did not attend college and lost ground, just 18% see a recovery period of six or more years.

A Growing Lower Class? Asked to place themselves into one of five socioeconomic classes (upper, upper-middle, middle, lower-middle and lower), a slightly higher share of Americans put themselves in the lower two groups now than before the recession began—29% now vs. 25% in March 2008. Half say they are middle class (down from 53% in 2008), while 20% place themselves in the upper two classes (virtually unchanged from 2008). Blacks, as a group, are an exception to this overall pattern. The share of blacks who now identify with the upper class has gone up during this recession, to 20% now from 15% two years ago. 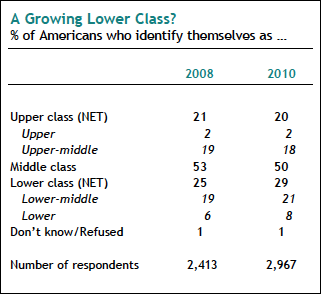 Not Everyone Got Whacked: Even in these bad times, some people have made out OK. As noted above, about two-in-ten (21%) adults say their household finances are in better shape now than before the recession began. Among all currently employed workers, 20% say they were promoted or found a better job during the recession. And about four-in-ten say they have gotten at least one raise during the past 30 months (a proportion that is likely much lower than it would have been if the economy had been more robust).

Next: IV. The New Frugality
← Prev Page
Page1Page2You are reading page3Page4Page5Page6Page7Page8
Next Page →