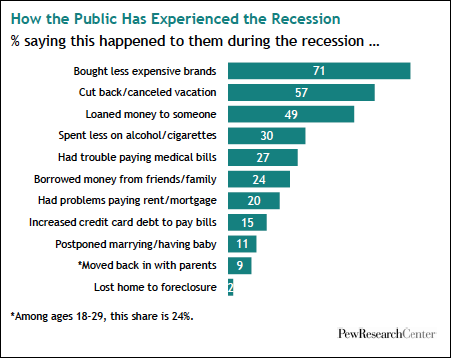 Making Ends Meet: Americans have changed their lifestyles in many different ways to make ends meet during this recession. More than seven-in-ten (71%) say they have bought less expensive brands. Nearly six-in-ten (57%) say they have cut back or canceled vacation plans. About half (49%) say they have loaned money to someone, and 24% report having borrowed money from someone. Three-in-ten say they have cut back on alcohol or cigarettes. Nearly one-in-ten (9%) say they have moved back in with their parents (among adults ages 18 to 29, this figure rises to 24%). Overall, higher-income adults report making fewer of all these lifestyle adjustments than do lower-income adults. Likewise, adults ages 65 and older report making fewer of them than do younger and middle-aged adults. 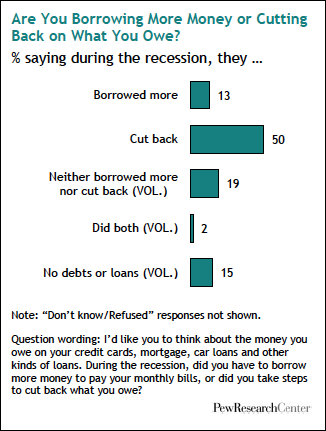 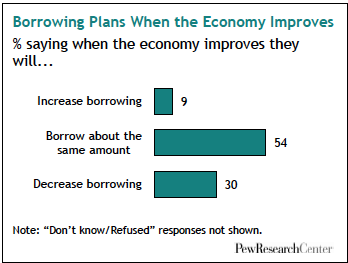 Neither a Spender Nor a Borrower Be: More than six-in-ten (62%) Americans say that since the recession began, they’ve cut back on household spending. Half say they have reduced the amount they owe on mortgages, credit cards, car loans and other borrowing. Of those who have savings or retirement accounts, more than four-in-ten (42%) say they’ve adopted a more conservative approach to saving and investing, compared with just 8% who say they’ve taken a more aggressive approach. These new habits of thrift and caution could well outlive this recession. Asked to predict their financial behaviors once the economy recovers, 48% say they plan to save more, 31% say they plan to spend less and 30% say they plan to borrow less. Only small percentages say the reverse—that they plan to save less and borrow and spend more.