But the survey also suggests that formal religious education is not a central part of how religious tradition is passed on to children in India, at least not for most religious groups. Fewer than half of Indian parents say their children receive religious instruction outside the home, suggesting that religious traditions and beliefs are mostly passed down within families. 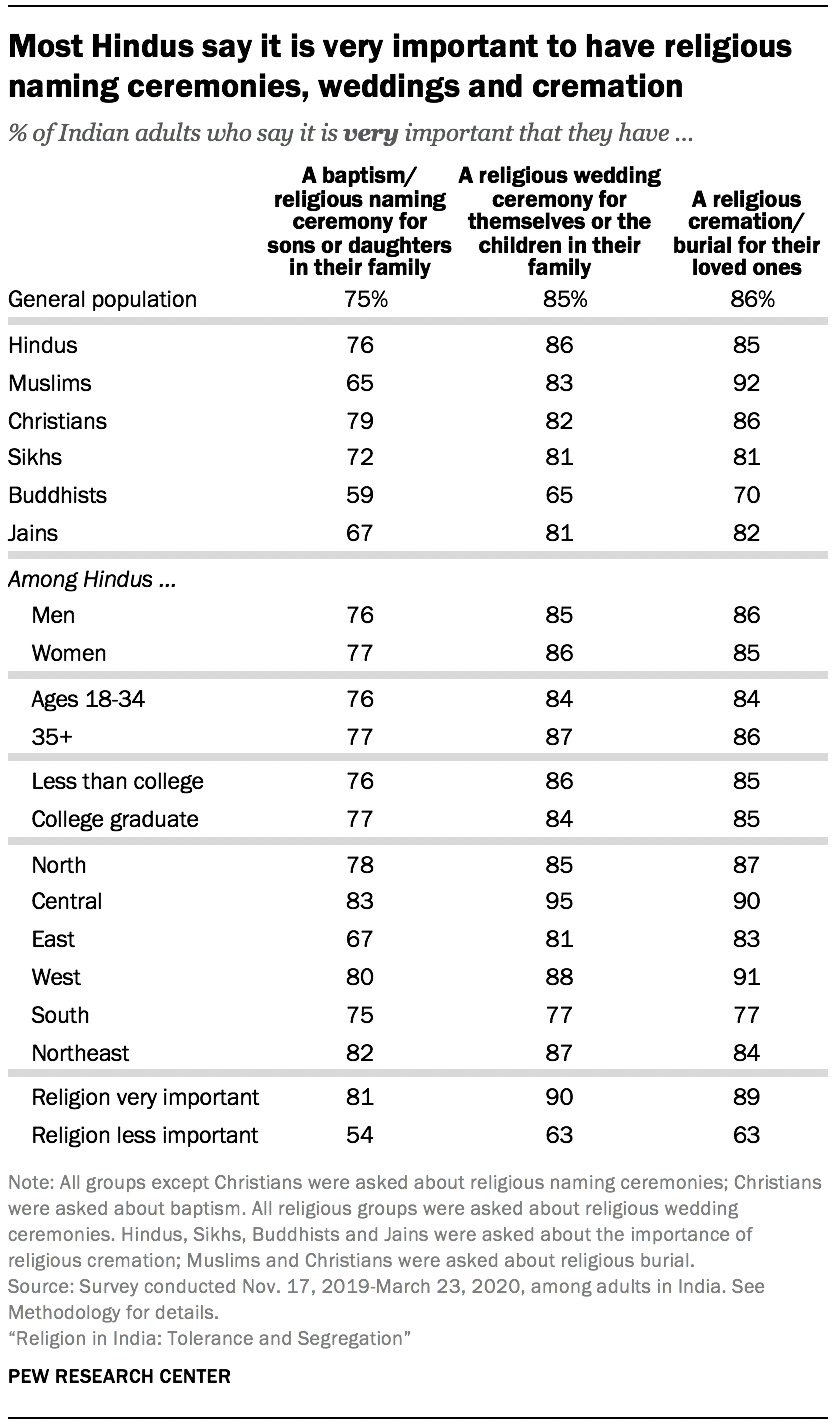 The survey asked respondents how important it is to them to have religious ceremonies for lifecycle events – specifically, a religious naming ceremony or baptism for their family’s children, a religious wedding for themselves or for the children in their family, and a religious cremation or burial for loved ones. Most Indians in all six major religious groups consider it very important to perform each of these three ceremonies.

Buddhists are less likely to place high priority on these ceremonies, but still, most Buddhists say it is very important to have a religious naming ceremony (59%), religious wedding (65%) and religious cremation (70%) for their loved ones. 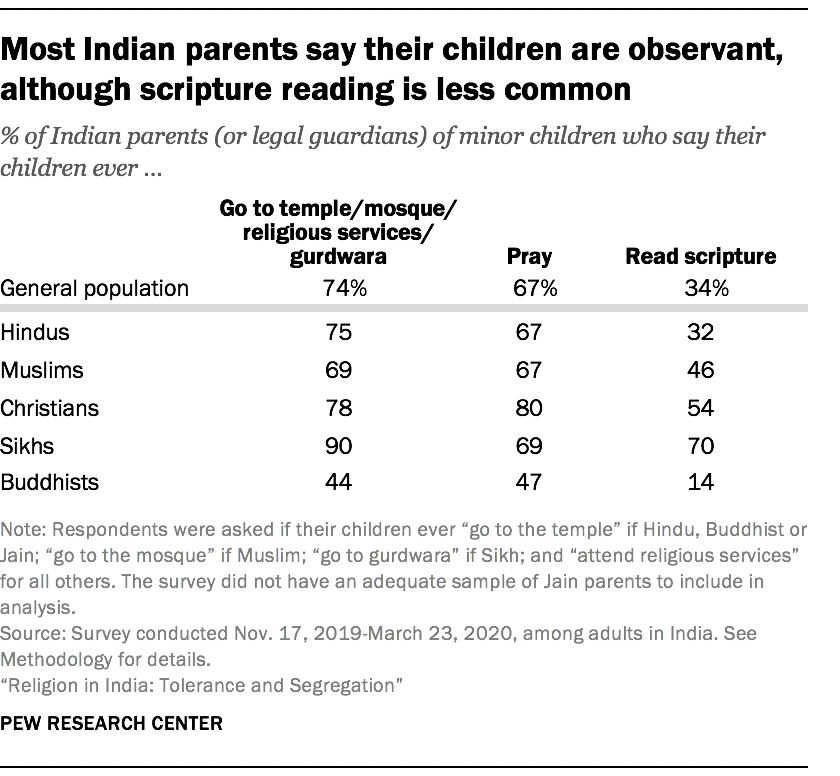 Given that interreligious marriage is very uncommon in India (see Chapter 3), it stands to reason that Indian parents nearly universally say they are bringing up their children in the same religion as their own (99%).

In addition, a majority of Indian parents say their children visit a house of worship associated with their faith (74%) and that their children pray (67%). Sikh parents are especially likely to say their children go to the gurdwara (90%). (Fieldwork for this survey was completed before the country’s first major lockdown due to COVID-19.)

Fewer Buddhist parents than parents in other religious groups say their children ever go to temple (44%), pray (47%) or read scripture (14%).

Younger parents (under age 35) and those who are highly educated are less likely to say their children receive religious instruction outside the home. For example, roughly one-third of college-educated Hindu parents (32%) send their children to formal classes in religion, compared with 42% of those who have less education.

Sikh attitudes on passing this tradition down to children also are linked to politics. Specifically, Sikhs who say they voted for the Bharatiya Janata Party (BJP) in the 2019 parliamentary elections are much more likely than those who voted for the Indian National Congress (INC) to say Sikh children should keep their hair uncut (81% vs. 56%). Among those who voted for Shiromani Akali Dal, a Sikh party, 65% say it is very important that children in their family keep their hair uncut.20

Caste also is linked with attitudes on this issue. Fully 76% of General Category Sikhs say it is very important to keep children’s hair long, compared with 59% of those belonging to lower castes.

Religion in India: Tolerance and Segregation 1. Religious freedom, discrimination and communal relations 2. Diversity and pluralism 3. Religious segregation 4. Attitudes about caste 5. Religious identity 6. Nationalism and politics 7. Religious practices
8. Religion, family and children
Indians value marking lifecycle events with religious ritualsMost Indian parents say they are raising their children in a religionFewer than half of Indian parents say their children receive religious instruction outside the homeVast majority of Sikhs say it is very important that their children keep their hair long
9. Religious clothing and personal appearance 10. Religion and food 11. Religious beliefs 12. Beliefs about God Acknowledgments Appendix A: Methodology Appendix B: Index of religious segregation