Bindi: A decorative mark on the forehead, worn by Hindu women (and members of some other religious groups), traditionally believed to be venerating an energy center of the human body or representing “the third eye,” but also worn as an adornment or a sign of marriage.

Burqa: A loose-fitting garment worn by some Muslim women that covers the whole body, including the face and head.

Hijab: A head scarf, worn by some Muslim women, which leaves the face exposed.

Janeu: A white thread worn traditionally by Brahmin men across the torso after a boyhood rite of passage ceremony.

Kara: A metal bracelet traditionally worn by Sikh men and women as a symbol of their faith.

Kirpan: A metal dagger or sword carried by Sikhs as a symbol of their commitment to justice, compassion and service to humanity.

Niqab: A garment worn by some Muslim women that covers both the face and neck but leaves the eyes exposed.

Tilak: A mark on the forehead typically worn by Hindu men (and some members of other religious groups) as a sign of piety.

In addition to religious activities like praying, visiting houses of worship or having a home altar, many Indians also display their religious observance through attire, including the use of special clothing, jewelry, and other aspects of their personal appearance such as beards.

Half of Hindus (52%) and Muslims (50%) and a majority of Christians (61%), for instance, say they generally wear a religious pendant. And most Sikh men and women wear a traditional metal bracelet, known as a kara, and follow the distinctive Sikh practice of keeping their hair long.

Many of these practices are gender-specific. The vast majority of Muslim men say they wear a skullcap (84%), and most also have a beard (64%). Similarly, Sikh men largely have beards (83%) and wear turbans (69%).

Among women, wearing a head covering outside the home is a common practice among Muslims (89%), Sikhs (86%) and Hindus (59%). The practice of covering the head outside the home is less widespread among Buddhist (30%) and Christian (21%) women. Nearly two-thirds of Muslim women in India (64%) say they wear a burqa. A burqa is a covering for the whole body, including the face and head, but interviewers did not define the term for the respondents, leaving the exact definition up to their own understanding.

Overwhelming majorities of Hindu (84%) and Buddhist (78%) women say they wear a bindi, a forehead marking, and at least some Muslim (18%), Christian (22%) and Sikh (29%) women also say they do this, even though the practice is not typically considered part of these religious groups’ traditions. Meanwhile, a slim majority of Hindu men wear a tilak (53%), another type of forehead marking often made in red.21

In general, Indians with higher religious observance are more likely to follow these practices related to clothing and appearance. For example, Hindu men who say religion is very important in their lives are more likely than other Hindu men to wear a tilak (56% vs. 42%).

Religious appearances also differ by region: Hindu women in the South are significantly less likely than Hindu women nationally to say they cover their heads outside of the home (22% vs. 59%). And wearing a hijab (a garment that covers the hair only) is more common among Southern Indian Muslim women than Muslim women elsewhere in the country: About one-in-four Muslim women in the South (23%) say they wear a hijab, compared with single-digit percentages elsewhere in the country.

Hindu respondents in the Northeastern region are generally the least likely to follow customary appearance practices. Hindu women in the Northeast are significantly less likely than Hindu women nationally to wear a bindi (59% vs. 84%), or to cover their head (29% vs. 59%). The same pattern applies to men: Hindu men in the region are less likely than Hindu men elsewhere to wear a tilak (21% in Northeast, 53% nationally).

Among Hindus, caste is also an important marker of religious clothing. Brahmin (priestly caste) men are more inclined than others to say they wear a tilak (76%, compared with 53% among Hindu men overall) and a janeu, a sacred white thread worn around the chest, usually after an initiation ceremony (56% vs. 18%).

Half or more of Hindus, Muslims and Christians wear religious pendants

Regionally, a minority of Hindus in the West (40%) and Northeast (34%) say they generally wear a religious pendant, compared with 52% of Hindus nationally.

Most Hindu, Muslim and Sikh women cover their heads outside the home

Vast majorities of Hindu (84%) and Buddhist (78%) women say they generally wear a bindi – a decorative mark worn on the part of the forehead traditionally believed to be the location of “the third eye,” but also worn as an adornment or a sign of marriage. (The survey did not include enough interviews with Jain women to separately analyze their practices, but Jain women are known to wear bindis as well.) Smaller shares of Muslim (18%), Christian (22%) and Sikh (29%) women also say they wear a bindi.

A majority of Indian women overall also say they keep the practice of covering their head outside their home, including especially high shares of Muslim (89%) and Sikh women (86%) who do this. A smaller majority of Hindu women (59%) cover their heads. The practice is less common among Christians (21%) and Buddhists (30%).

Younger Hindu women (ages 18 to 34) are less likely than their elders to cover their heads (55% vs. 63%). Among Hindus, the practice of covering the head also is closely associated with socioeconomic status: Hindu women with college degrees are significantly less likely than others to wear a head covering in public (38% vs. 61%). A majority of rural women (66%) say they keep the practice, compared with 45% among urban Hindu women. Similarly, lower-caste women are more likely than those belonging to General Category castes to say they cover their heads (62% vs. 51%). 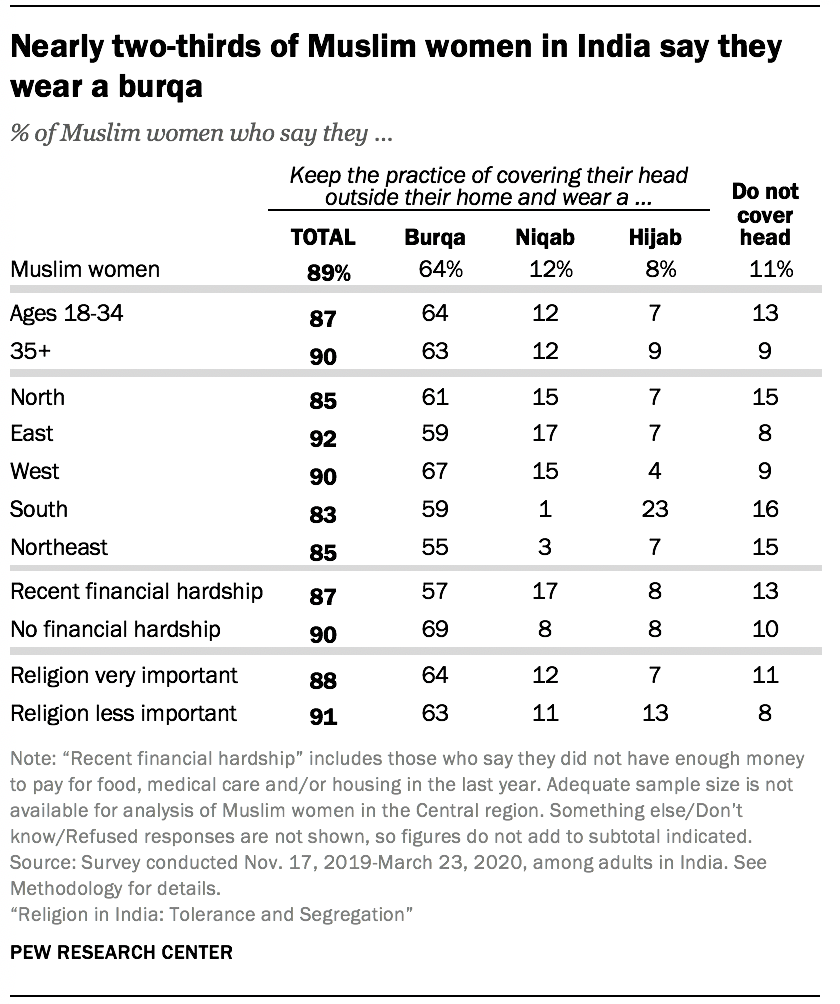 Muslim women who say they cover their heads were further asked what type of head covering they generally use – hijab, niqab or burqa. (The terms were not defined for respondents.) A majority of all Muslim women in India (64%) say they generally wear a burqa, which covers the entire face. Smaller shares say they wear a niqab (12%) or a hijab (8%).

Muslim women who have faced recent financial hardship (i.e., did not have enough money to pay for food, medicine or housing in the last year) are less likely than other women to wear a burqa (57% vs. 69%) and more likely to wear a niqab (17% vs. 8%).

The South differs from the rest of India in that Muslim women there are more likely to wear a hijab (23%) and less likely to weak a niqab (1%) than those in several other regions. For example, in the Western region, 15% wear a niqab and just 4% say they wear a hijab. 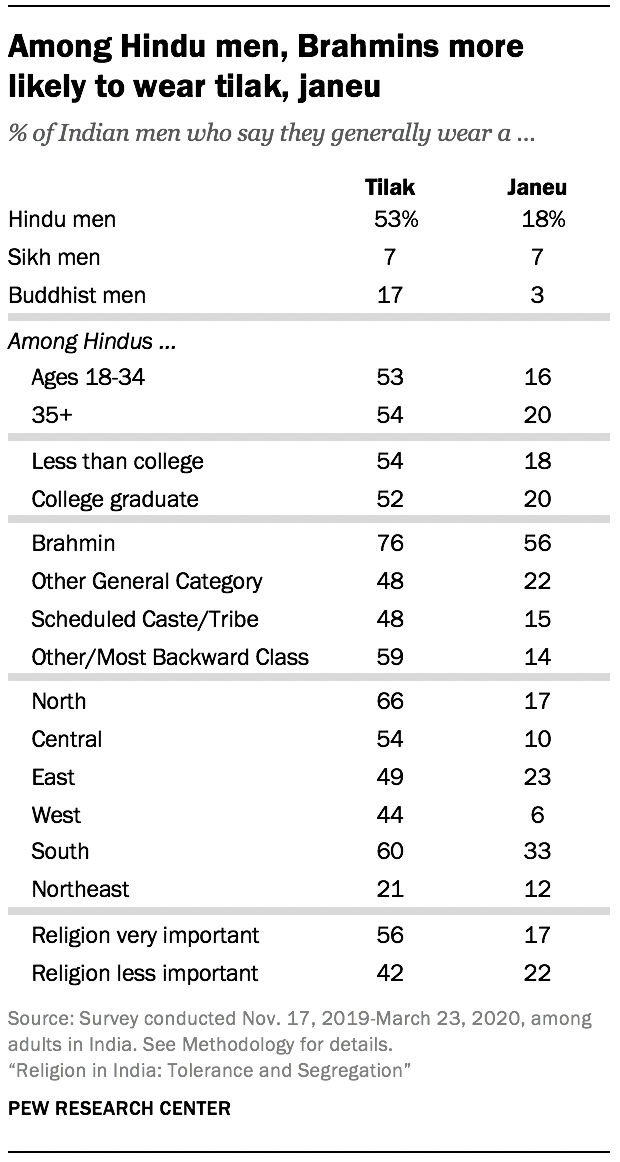 The survey asked Hindu, Sikh and Buddhist men if they generally wear a tilak – a mark on the forehead typically worn as a sign of piety. Men in these three religious groups also were asked if they wear a janeu, a white thread worn traditionally by Brahmin men across the torso after a boyhood rite of passage ceremony.

Within the Hindu community, Brahmin men are much more inclined than those in other castes (including other General Category castes) to say they wear a tilak (76%) or a janeu (56%). (Both practices are historically associated with the priestly caste.) Wearing a janeu, however, is significantly less common among younger Brahmin men – that is, under the age of 35 – than older Brahmins (45% vs. 65%).

Among Hindu men overall, those living in Northeastern India (21%) are significantly less likely than those living elsewhere to wear a tilak, while those in the Northern region wear the tilak at the highest rate (66%). Meanwhile, Hindus in the South (33%) and East (23%) are the most likely to wear a janeu, with those in the West (6%) least likely.

Hindu men who say religion is very important in their lives are significantly more likely than other Hindu men to say they wear a tilak (56% vs. 42%), although this gap does not exist for the janeu.

The overwhelming majority of Indian Muslim men (84%) say they generally wear a skullcap, a head covering often but not exclusively worn during daily prayers.

Muslim men who say religion is very important in their lives are significantly more likely than other Muslims to wear a skullcap (86% vs. 67%).

Skullcap usage varies by region, with Muslim men in the Northeast (36%) significantly less likely than men elsewhere to wear a skullcap. Nine-in-ten or more in the Eastern, Western and Central regions of India say they wear a skullcap. 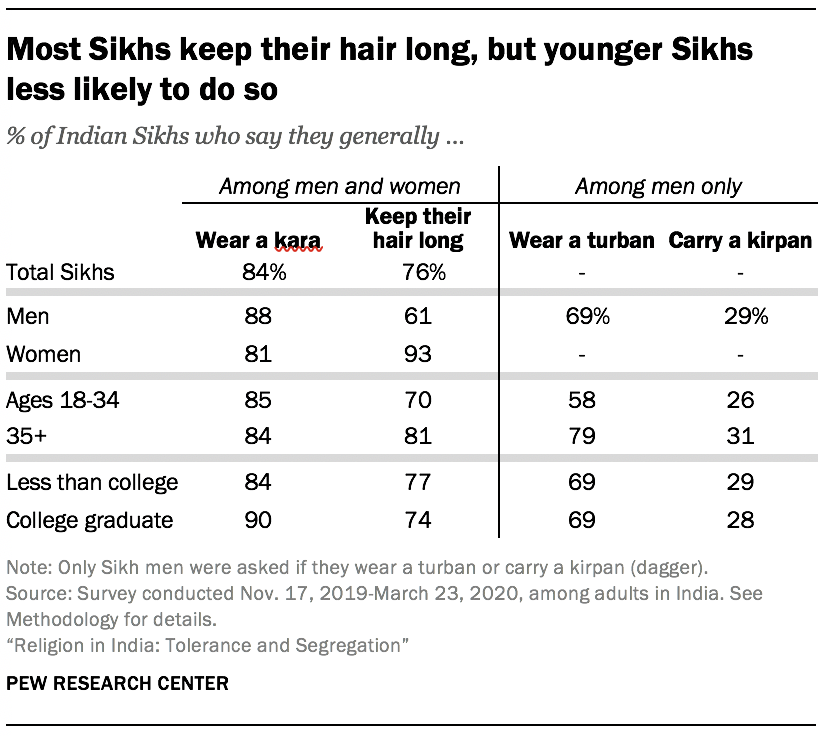 The survey asked Sikh respondents if they follow some of the traditional displays of devotion prescribed in Sikhism: wearing a metal bracelet (kara), keeping their hair long, and for men, wearing a turban and carrying a metal dagger (kirpan). These practices have been used historically to create a distinct Sikh identity and community.

Among Sikh men, most respondents say they wear a turban (69%), although fewer say they generally carry a kirpan (29%). Sikh men who say they pray daily are more likely to carry a kirpan than those who pray less often (36% vs. 24%). 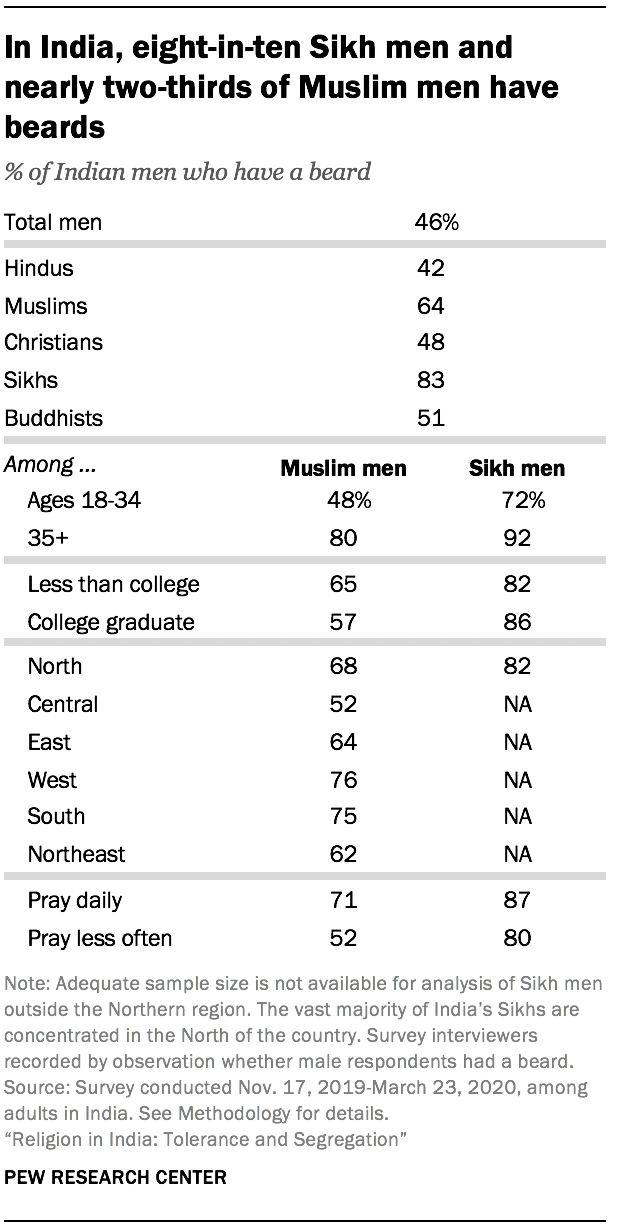 The survey asked interviewers to record if a male respondent has a beard. Among Muslim and Sikh men in India, majorities have beards, (64% and 83%, respectively). For many Sikh men, having a beard is seen as a religious obligation, and beards are also traditional in several Islamic schools of thought. Fewer Buddhist (51%), Christian (48%) and Hindu men (42%) have beards.

While half of Muslim men or more in all regions have a beard, roughly three-quarters in the West and South keep a beard (76% and 75%, respectively).

Muslim men who pray daily are significantly more likely than other Muslim men to have a beard (71% vs. 52%). But among Sikhs, religious observance matters less in whether or not men keep a beard.

Next: 10. Religion and food
← Prev Page
Page6Page7Page8Page9You are reading page10Page11Page12Page13Page14Page15Page16
Next Page →