When given the opportunity to select the deity they feel closest to, Hindus most commonly select Shiva (44%), often referred to as the god of destruction. Roughly similar shares of Hindus feel close to Shiva, regardless of whether they believe there is just one God (42%), there is one God with many manifestations (46%) or there are many gods (46%).

Broadly speaking, Indians who have had financial difficulties in the previous year (i.e., had trouble paying for food, medical care or housing) are similar to other Indians in how they interact with and believe in God – even when the actions or beliefs touch on financial matters. For example, Indians who have faced financial hardship are about as likely to ever ask God for prosperity (94%) as they are to ask for good health (93%) or forgiveness (92%) – and these shares are nearly identical for those who have not faced financial troubles. Hindus who have faced financial hardship are also just as likely as other Hindus to feel close to Lakshmi, the goddess of wealth, fortune and success (28% vs. 27%).

Nearly all Indians believe in God

While similar shares of Indian men and women believe in God with absolute certainty (78% and 80%, respectively), Muslim men are slightly more likely than Muslim women to believe with certainty (81% vs. 76%).

Hindus across India’s various regions believe in God at roughly similar rates. But Muslims in the East are less likely than Muslims elsewhere to believe in God with total certainty (67% vs. 79% nationally).

As with many other aspects of religious belief, Hindus who have a favorable view of the Bharatiya Janata Party (BJP) appear somewhat more devout by this measure: They are slightly more likely than those with an unfavorable view of the ruling party to believe in God with absolute certainty (81% vs. 74%).

Few Indians believe ‘there are many gods’ 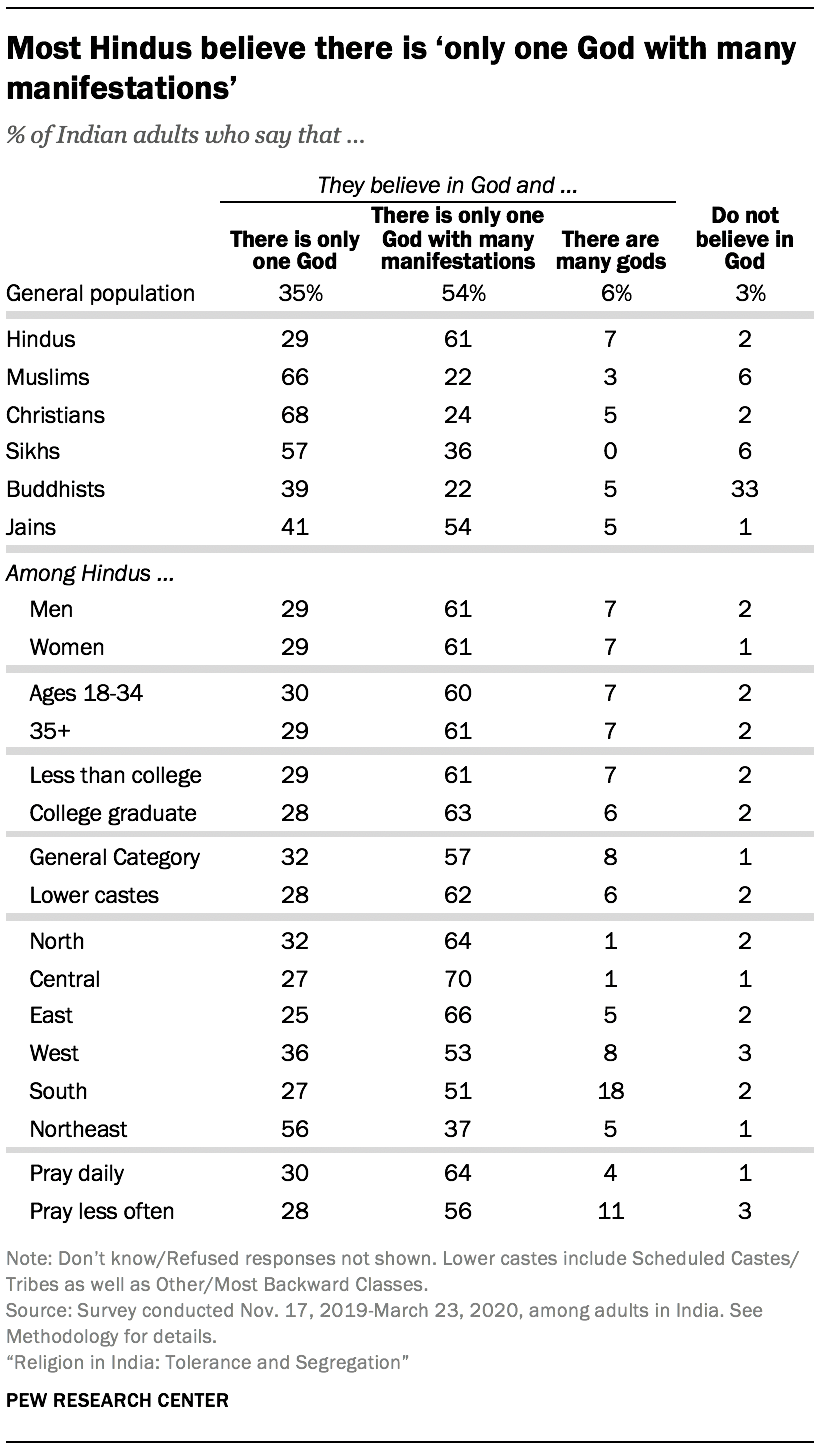 While belief in God is nearly universal in India, the kind of God(s) that Indians believe in varies. Majorities or pluralities of Muslims (66%), Christians (68%), Sikhs (57%) and Buddhists (39%) say “there is only one God.” By contrast, most Hindus (61%) and Jains (54%) say that there is “only one God with many manifestations.”

In all of India’s major religious communities, much smaller shares believe that “there are many gods,” including just 7% of Hindus who choose this option from the three possible responses provided.

Many Hindus feel close to Shiva

The survey asked Hindus, Sikhs, Buddhists and Jains who say they believe in God which god they feel closest to, seeking to measure the concept of ishta devata (“personal god”). Respondents were shown 15 images of gods on a card as possible options (though they could also name other deities), and they could select up to three gods.23

Hindus most commonly feel close to Shiva (44%). In Hindu temples, Shiva is represented both through his male form as well as a symbol, known as a lingam. In Hindu philosophy, Shiva’s role in destruction does not necessarily have a negative connotation. In fact, destruction is considered central to creation as it may pave the way for beneficial change.

In addition, roughly one-third of Hindus feel close to Hanuman (35%), the god who symbolizes strength and loyalty, or Ganesha (32%), the remover of obstacles who is especially revered before starting new projects. Among Jains, the most popular responses are Lakshmi (20%) and Ganesha (17%), although six-in-ten Jains (59%) say there is “another god” not named by the survey to whom they feel closest.

Among Sikhs and Buddhists, no single god is chosen by more than one-in-ten respondents (although about three-in-ten in each group choose the “another god” option). An additional 29% of Sikhs decline to answer the question, and one-third of Buddhists do not believe in God and thus did not receive this question.

In the Northeast, fully 46% of Hindus say they feel closest to Krishna, often depicted as a lover and prankster, whose dialogue with a prince during battle is the basis for the Bhagavad Gita. Krishna is more popular in the Northeast than in any other region. And Hanuman and Lord Ram, the god of chivalry and virtue and hero of the epic Ramayana, find far less affinity among Hindus in the Northeast than they do elsewhere.

Noticeable shares of Hindus in the South feel close to several deities who have hardly any Hindu followers elsewhere in the country: Murugan (14% of South Hindus), Ayyappa (13%) and Meenakshi (7%). 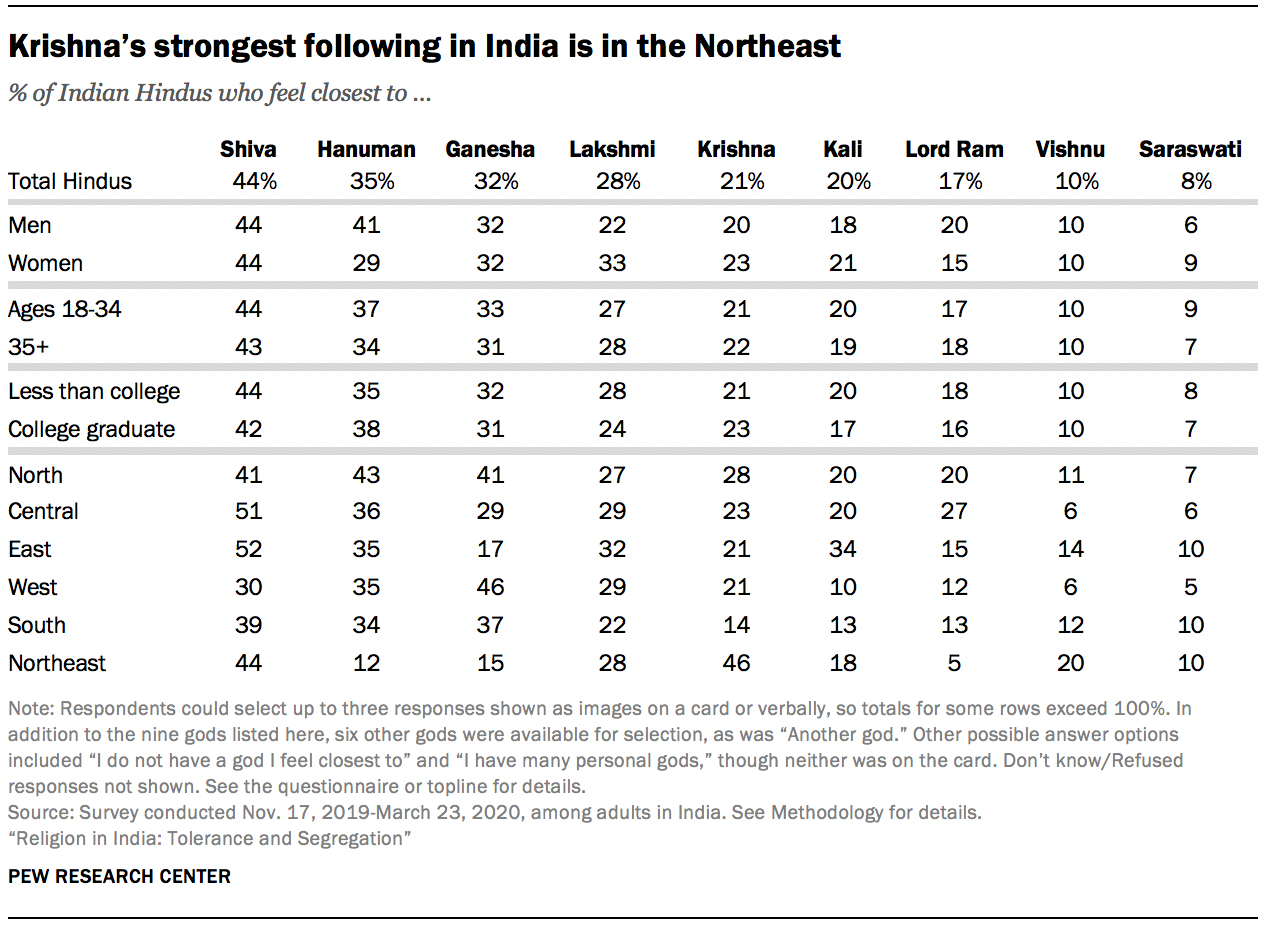 Many Indians believe God can be manifested in other people

Indians who have a favorable view of the BJP are significantly more likely than Indians who disapprove of the ruling party to think God can manifest in any of these ways. For instance, while two-thirds of BJP supporters say God can be manifested in animals, roughly half of BJP detractors (52%) share this belief. 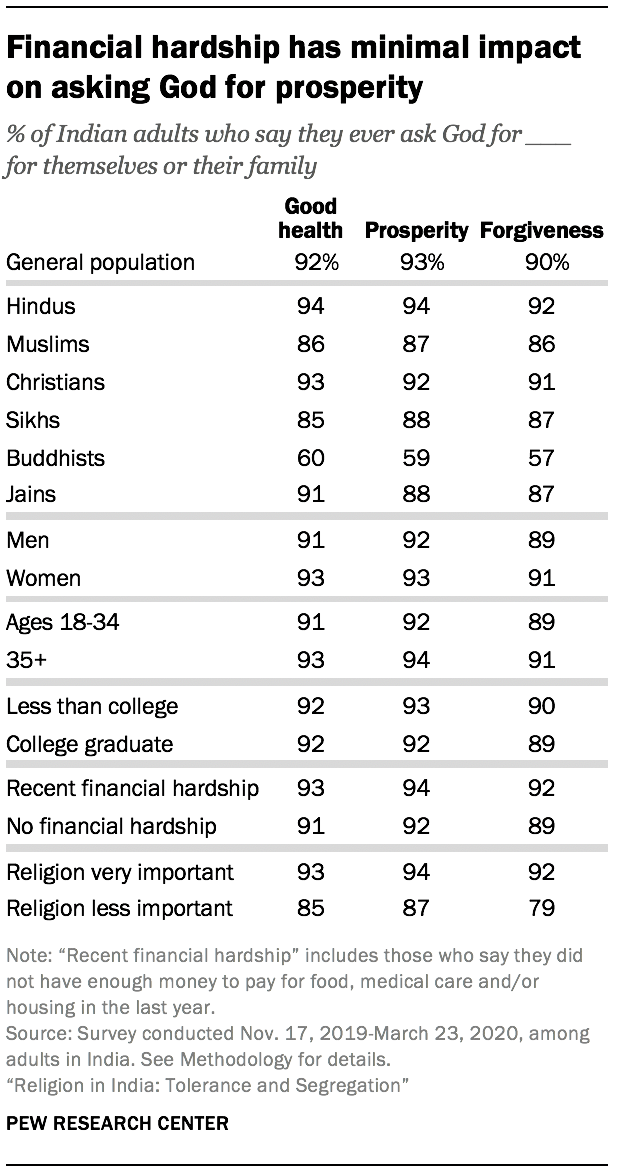 Indians who expressed a belief in God were also asked if they ever ask God to give them or their families several things: good health, prosperity and forgiveness. At least nine-in-ten Indians ask God for each. Buddhists are the least likely to ever ask God for these things, but much of this is because one-third of Buddhists say they do not believe in God; the vast majority of Buddhists who do believe in God ask God for good health, prosperity and forgiveness.

While Indians with different levels of education also are about equally likely to ask God for good health, prosperity and forgiveness, college-educated Christians are somewhat more inclined than other Christians to ever ask God for forgiveness (98% vs. 90%), a pattern also seen among Sikhs (95% vs. 86%).

Next: Acknowledgments
← Prev Page
Page6Page7Page8Page9Page10Page11Page12You are reading page13Page14Page15Page16
Next Page →