Indians generally see high levels of religious freedom in their country. Overwhelming majorities of people in each major religious group, as well as in the overall public, say they are “very free” to practice their religion. Smaller shares, though still majorities within each religious community, say people of other religions also are very free to practice their religion. Relatively few Indians – including members of religious minority communities – perceive religious discrimination as widespread.

Indians also widely consider communal violence to be an issue of national concern (along with other problems, such as unemployment and corruption). Most people across different religious backgrounds, education levels and age groups say communal violence is a very big problem in India.

The partition of the Indian subcontinent in 1947 remains a subject of disagreement. Overall, the survey finds mixed views on whether the establishment of Hindu-majority India and Muslim-majority Pakistan alleviated communal tensions or stoked them. On balance, Muslims tend to see Partition as a “bad thing” for Hindu-Muslim relations, while Hindus lean slightly toward viewing it as a “good thing.”

The vast majority of Indians say they are very free today to practice their religion (91%), and all of India’s major religious groups share this sentiment: Roughly nine-in-ten Buddhists (93%), Hindus (91%), Muslims (89%) and Christians (89%) say they are very free to practice their religion, as do 85% of Jains and 82% of Sikhs. 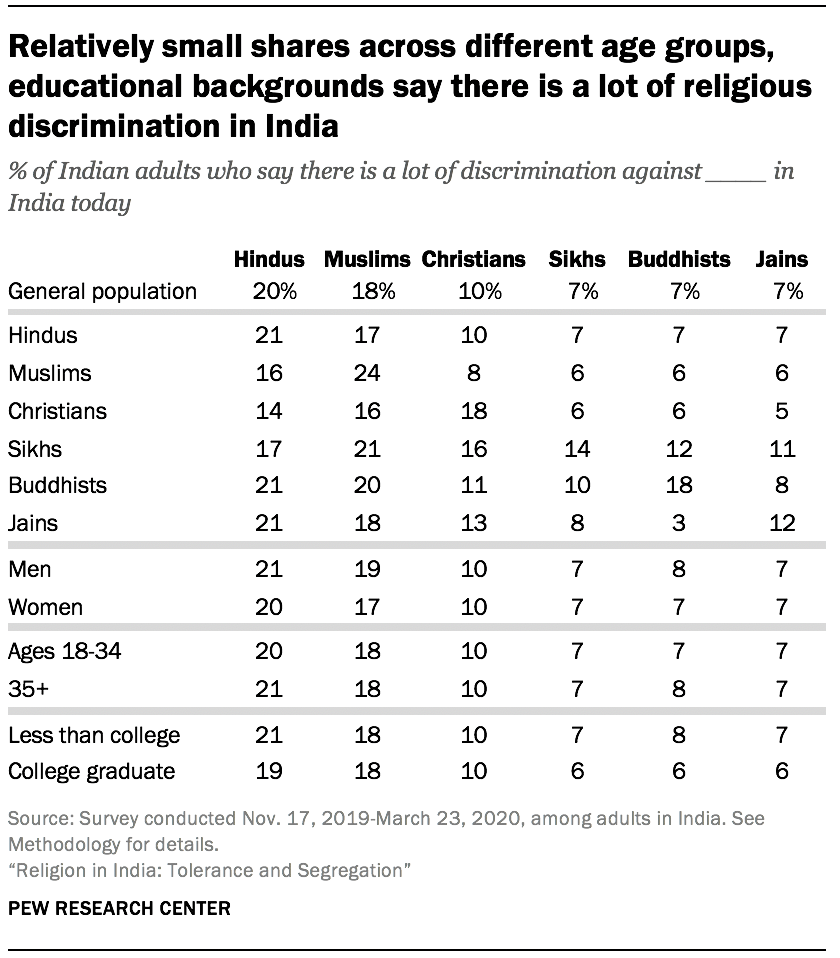 Generally, Indians’ opinions about religious discrimination do not vary substantially by gender, age or educational background. For example, among college graduates, 19% say there is a lot of discrimination against Hindus, compared with 21% among adults with less education.

Within religious groups as well, people of different ages, as well as both men and women, tend to have similar opinions on religious discrimination.

Most Indians report no recent discrimination based on their religion

Within religious groups, experiences with discrimination vary based on region of residence and other factors. Among Muslims, for instance, 40% of those living in Northern India and 36% in the Northeast say they have faced recent religious discrimination, compared with no more than one-in-five in the Southern, Central, Eastern and Western regions.

Experiences with religious discrimination also are more common among Muslims who are more religious and those who report recent financial hardship (that is, they have not been able to afford food, housing or medical care for themselves or their families in the last year).

Hindus with less education and those who have recently experienced poverty also are more likely to say they have experienced religious discrimination.

Less than 5% of India’s population lives in the eight isolated states of the country’s Northeastern region. This region broadly lags behind the country in economic development indicators. And this small segment of the population has a linguistic and religious makeup that differs drastically from the rest of the country.

According to the 2011 census of India, Hindus are still the majority religious group (58%), but they are less prevalent in the Northeast than elsewhere (81% nationally). The smaller proportion of Hindus there is offset by the highest shares of Christians (16% vs. 2% nationally) and Muslims (22% vs. 13% nationally) in any region. And based on the survey, the region also has a higher share of Scheduled Tribes than any other region in the country (25% vs. 9% nationally), and half of Scheduled Tribe members in the Northeast are Christians. 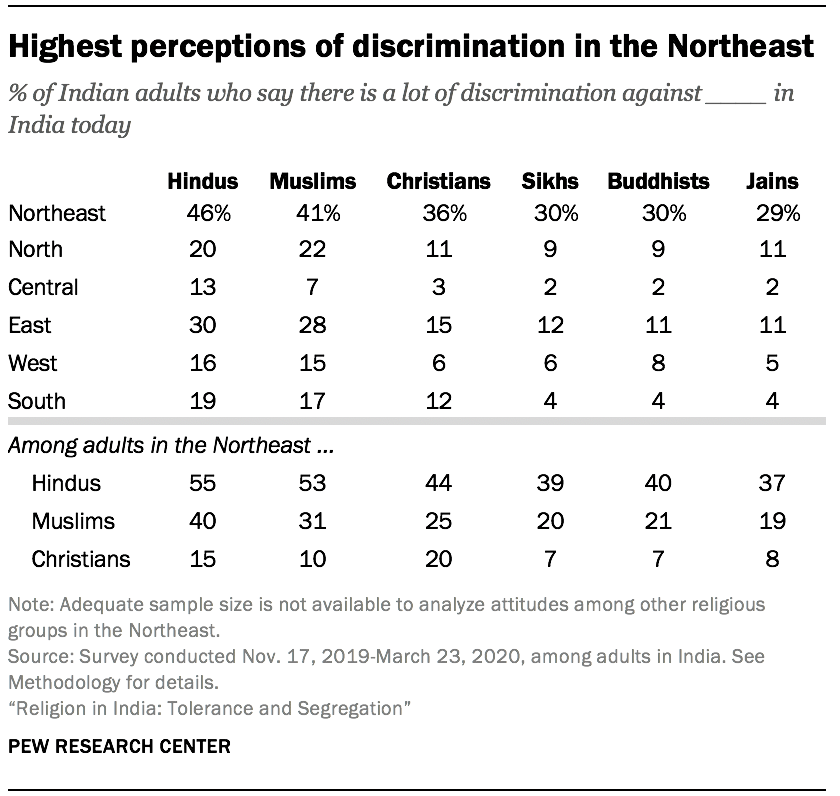 Indians in the Northeast are more likely than those elsewhere to perceive high levels of religious discrimination. For example, roughly four-in-ten in the region say there is a lot of discrimination against Muslims in India, about twice the share of North Indians who say the same thing (41% vs. 22%). 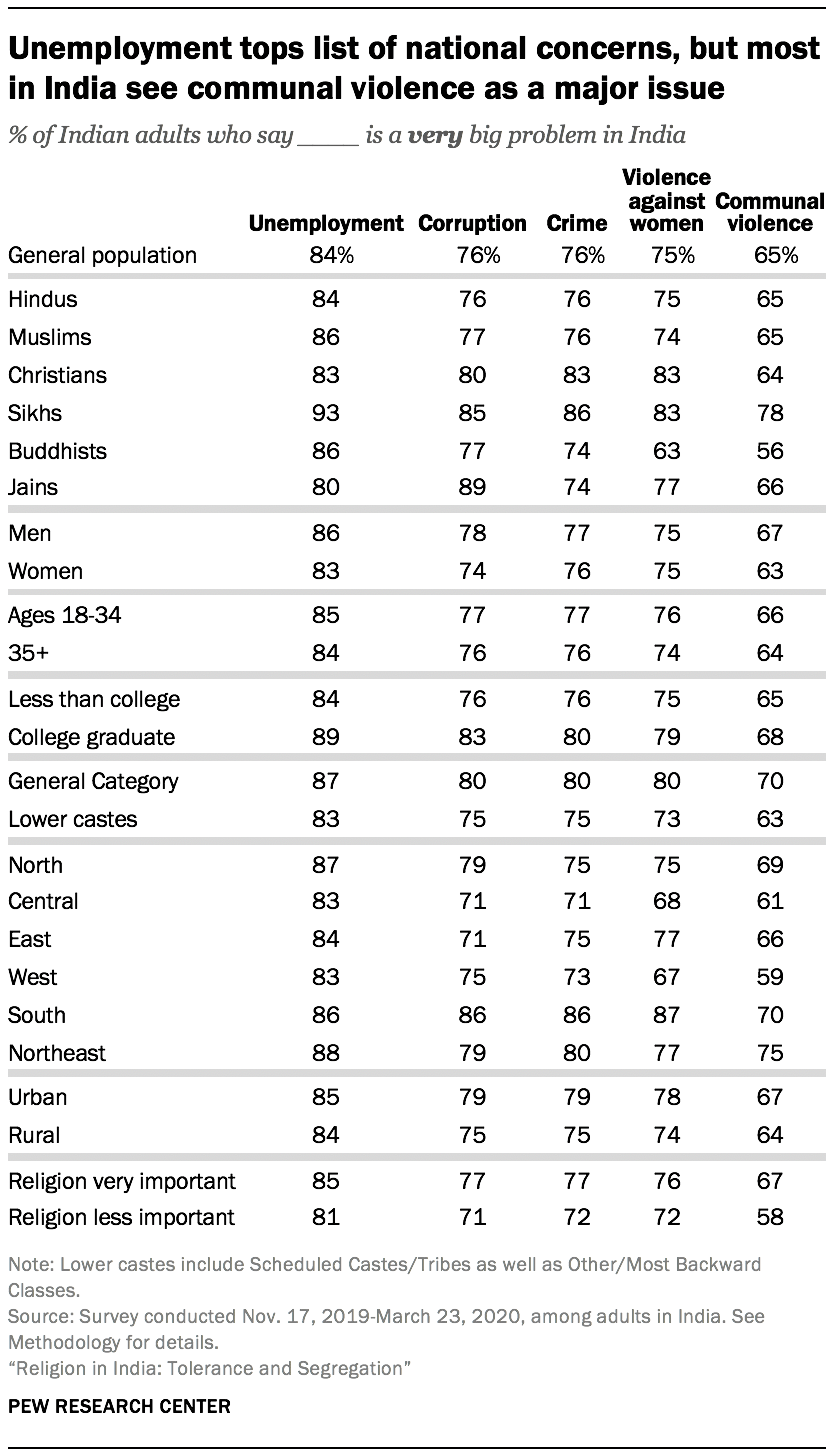 Most Indians (65%) say communal violence – a term broadly used to describe violence between religious groups – is a “very big problem” in their country (the term was not defined for respondents). This includes identical shares of Hindus and Muslims (65% each) who say this.

But even larger majorities identify several other national problems. Unemployment tops the list of national concerns, with 84% of Indians saying this is a very big problem. And roughly three-quarters of Indian adults see corruption (76%), crime (76%) and violence against women (75%) as very big national issues. (The survey was designed and mostly conducted before the World Health Organization declared the COVID-19 outbreak a pandemic.)

Sikhs are more likely than other major religious groups in India to say communal violence is a major issue (78%). This concern is especially pronounced among college-educated Sikhs (87%).

Indians in different regions of the country also differ in their concern about communal violence: Three-quarters of Indians in the Northeast say communal violence is a very big problem, compared with 59% in the West. Concerns about communal violence are widespread in the national capital of Delhi, where 78% of people say this is a major issue. During fieldwork for this study, major protests broke out in New Delhi (and elsewhere) following the BJP-led government’s passing of a new bill, which creates an expedited path to citizenship for immigrants from some neighboring countries – but not Muslims.

Indians divided on the legacy of Partition for Hindu-Muslim relations

The end of Britain’s colonial rule in India, in 1947, was accompanied by the separation of Hindu-majority India from Muslim-majority Pakistan and massive migration in both directions. Nearly three-quarters of a century later, Indians are divided over the legacy of Partition.

About four-in-ten (41%) say the partition of India and Pakistan was a good thing for Hindu-Muslim relations, while a similar share (39%) say it was a bad thing. The rest of the population (20%) does not provide a clear answer, saying Partition was neither a good thing nor a bad thing, that it depends, or that they don’t know or cannot answer the question. There are no clear patterns by age, gender, education or party preference on opinions on this question.

Of the country’s six major religious groups, Sikhs have the most negative view of the role Partition played in Hindu-Muslim relations: Nearly two-thirds (66%) say it was a bad thing.

Most Indian Sikhs live in Punjab, along the border with Pakistan. The broader Northern region (especially Punjab) was strongly impacted by the partition of the subcontinent, and Northern Indians as a whole lean toward the position that Partition was a bad thing for Hindu-Muslim relations (48%) rather than a good thing (39%). 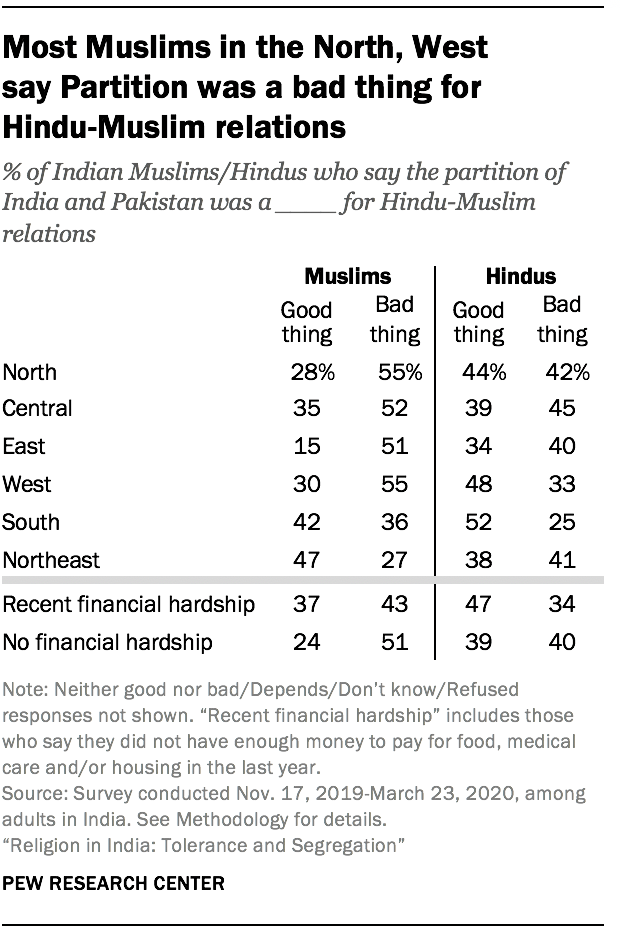 The South is the furthest region from the borders affected by Partition, and Southern Indians are about twice as likely to say that Partition was good as to say that it was bad for Hindu-Muslim relations (50% vs. 26%).

Among Hindus, meanwhile, those in the North are closely divided on the issue, with 44% saying Partition was a good thing and 42% saying it was a bad thing. But in the West and South, Hindus tend to see Partition as a good thing for communal relations.

Poorer Hindus – that is, those who say they have been unable to afford basic necessities like food, housing and medical care in the last year – tend to say Partition was a good thing. But opinions are more divided among Hindus who have not recently experienced poverty (39% say it was a good thing, while 40% say it was a bad thing). Muslims who have not experienced recent financial hardship, however, are especially likely to see Partition as a bad thing: Roughly half (51%) say Partition was a bad thing for Hindu-Muslim relations, while only about a quarter (24%) see it as a good thing.

Next: 2. Diversity and pluralism
← Prev Page
Page1You are reading page2Page3Page4Page5Page6Page7Page8Page9Page10
Next Page →

Religion in India: Tolerance and Segregation
1. Religious freedom, discrimination and communal relations
Most Indians say they and others are very free to practice their religionMost people do not see evidence of widespread religious discrimination in IndiaMost Indians report no recent discrimination based on their religionIn Northeast India, people perceive more religious discriminationMost Indians see communal violence as a very big problem in the countryIndians divided on the legacy of Partition for Hindu-Muslim relations
2. Diversity and pluralism 3. Religious segregation 4. Attitudes about caste 5. Religious identity 6. Nationalism and politics 7. Religious practices 8. Religion, family and children 9. Religious clothing and personal appearance 10. Religion and food 11. Religious beliefs 12. Beliefs about God Acknowledgments Appendix A: Methodology Appendix B: Index of religious segregation