When making major life decisions, most Americans in this internet age say they rely heavily on their own research. Fewer than half of U.S. adults overall say they rely on prayer and personal religious reflection. But highly religious Americans rely on prayer and personal reflection as often as on their own research, and those who are highly religious are roughly four times more likely than those who are not to turn to religious leaders for advice (33% vs. 8%).

This chapter explores the sources both highly religious and less religious people turn to when making major life decisions, as well as differences among members of various religious groups on this question. Additionally, it looks at where U.S. Catholics look for moral guidance: Most Catholics say they turn to their own conscience “a great deal” when seeking guidance on difficult moral questions, while far fewer say they look to the Catholic Church’s teachings, the Bible or the pope. 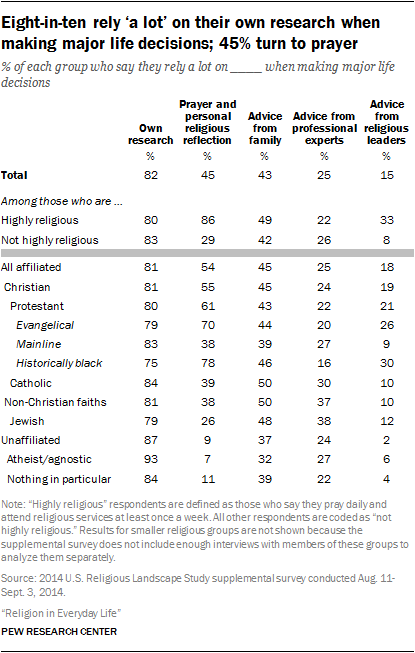 Most U.S. adults (82%), including majorities within every major religious group, say they rely “a lot” on their own research when making a “major life decision.” By comparison, far fewer say they rely as heavily on prayer and personal religious reflection (45%) or advice from family (43%) to help make important decisions.15

There are, however, major differences based on religion in the role of prayer in making decisions. Most highly religious people (86%), as well as most members of the historically black Protestant tradition (78%) and evangelical Protestants (70%), say they rely a lot on prayer and personal religious reflection. Far fewer Catholics (39%), mainline Protestants (38%) and adherents of non-Christian faiths (38%) rely heavily on prayer when making major decisions. And just one-in-ten religious “nones” (9%) say they turn to prayer a lot to help make decisions.

Most Catholics look to own conscience for moral guidance 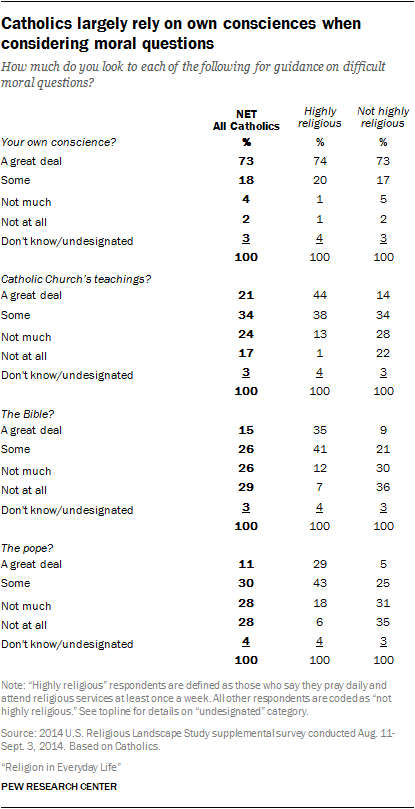 About three-quarters of U.S. Catholics (73%) say they look to their own conscience “a great deal” for guidance on difficult moral questions. Far fewer Catholics say they rely a great deal on the Catholic Church’s teachings (21%), the Bible (15%) or the pope (11%) for such guidance.

This set of questions was designed specifically for Catholics and was asked only of adults who self-identified as Catholic.

Religion in Everyday Life 1. Highly religious people not distinctive in all aspects of everyday life 2. Essentials of Christian identity vary by level of religiosity; many ‘nones’ say honesty vital to being a moral person
3. Few Americans turn to religious leaders for advice when making major life decisions
Large majority of highly religious people rely ‘a lot’ on prayer to make decisionsMost Catholics look to own conscience for moral guidance
Acknowledgments Methodology