Highly religious people are distinctive in their day-to-day behaviors in several key ways: They are more engaged with their families, more involved in their communities and more likely to report being happy with the way things are going in their lives.

The remainder of this chapter explores these topics in more detail. It also includes an assessment of how Americans relate to God on a day-to-day basis (e.g., by thanking God, asking God for guidance or help, or becoming angry with God). 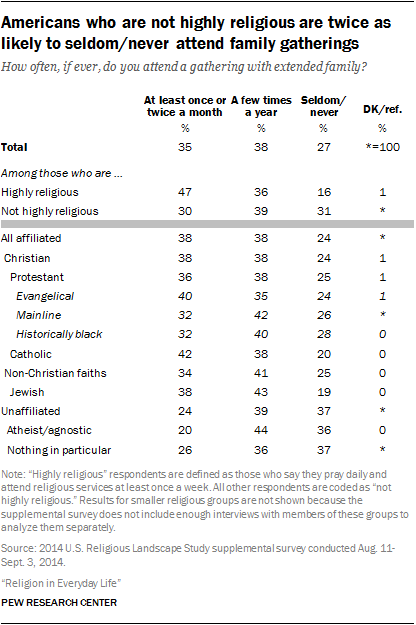 These differences persist even after taking into account factors such as marital status and presence of minor children in the home.

There could be many reasons for the association between religion and family gatherings. In some cases, the links may be clear and direct, such as when extended families gather for religious holidays or religious occasions such as baptisms or confirmations. But there also may be links that are less obvious, such as the possibility that people who enjoy getting together with relatives are generally outgoing and sociable, and therefore perhaps also more likely to enjoy going to religious services.

The survey also looks at differences among religious groups.9 It finds that Catholics (42%), Jews (38%) and Protestants (36%) all are more likely to say they gather at least once or twice a month with extended family than are religiously unaffiliated Americans (24%). And, conversely, religious “nones” are more likely than religiously affiliated Americans, as a whole, to say they seldom or never attend extended family gatherings (37% vs. 24%). These differences between religious groups are apparent even after controlling for other factors – such as age, education, race and gender – that also may be correlated with gathering with extended family. 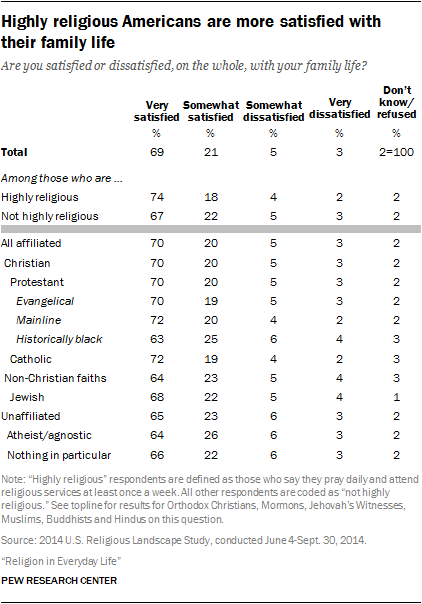 Looking at the data by religious group, the survey finds Christians are modestly more likely than those from non-Christian faiths and the religiously unaffiliated to say they are very satisfied with their family life (70% vs. 64% and 65%, respectively). Members of churches in the historically black Protestant tradition are somewhat less satisfied with their family life compared with people in other Christian traditions.

When commenting on life more generally, Americans who are highly religious are more likely than those who are less religious to report being very happy in their lives (40% vs. 29%).11

Differences among people from various religious traditions are modest on this question. One-third of Protestants say they are “very happy,” as do 35% of Catholics and 29% of those who identify with non-Christian faiths or with no religion. Within Christian groups, those who are highly religious express more happiness with the way things are going in their lives than do those who are less religious. (See detailed tables.)

Highly religious people are much more likely than those who are less religious to discuss religion regularly – both with family members and with people outside their family.

Evangelical Protestants and members of historically black Protestant churches are more likely to talk about religion on a regular basis than are people from other religious traditions. And religious “nones” are far less likely than those who identify with a faith to say they discuss religion with any regularity.

Adults who are highly religious themselves are somewhat more inclined to say the ideal approach when discussing religion is to try to persuade the other person of the correctness of one’s own point of view. And those who are less religious are about twice as likely as highly religious Americans to say the best course is to avoid discussing religion altogether (31% vs. 15%). Still, large majorities in both groups say the best approach is to agree to disagree. 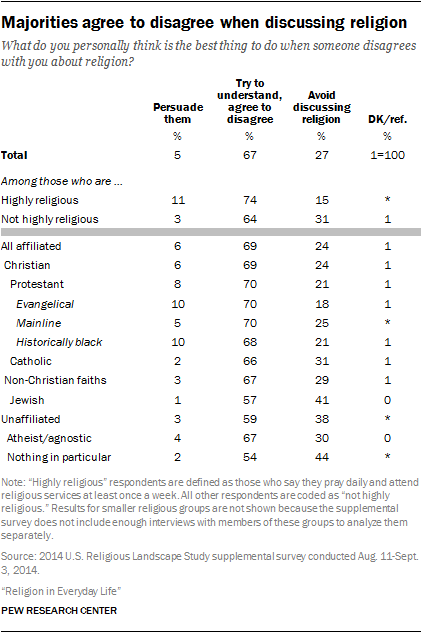 Volunteering most common among highly religious 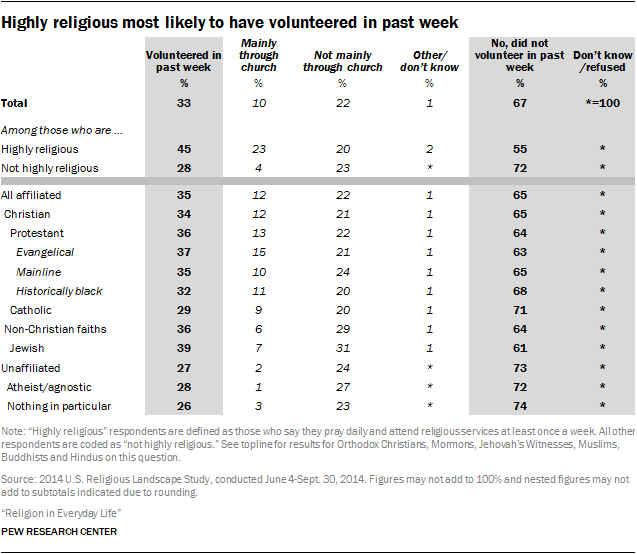 About two-thirds of highly religious adults say they donated time, money or goods to help the poor in the past week (65%). Fewer of those who are not highly religious say the same (41%). Christians and Jews are more likely than religious “nones” to say they donated money, goods or time to help the poor and needy in the given time frame. These differences between Christians and Jews on the one hand and religious “nones” on the other persist even after taking into account other potential explanatory variables, such as income, age and education.

Little connection between religion and living a healthy lifestyle 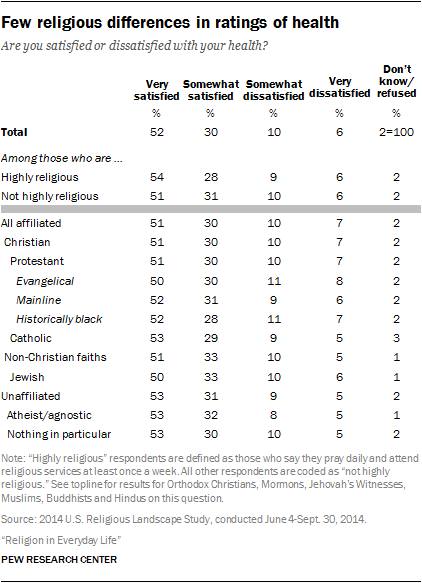 Similarly, there is virtually no difference in the self-reported frequency of exercise between adults who are highly religious and those who are not. About three-in-ten in each group say they did not exercise in the past week, while roughly half in each group say they exercised somewhere between one and four times. Among both highly religious and less religious adults, about one-in-five report exercising five times or more within the past seven days.

There is little variability across religious traditions regarding exercise frequency. 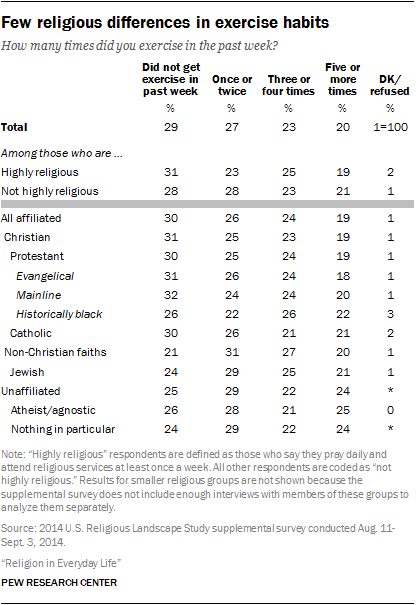 Highly religious people are more inclined than those who are less religious to meditate as a coping mechanism for stress (42% vs. 26%). The survey also shows that Christians, especially those in the historically black Protestant tradition, are more likely than Jews and religious “nones” to turn to meditation to cope with stress.

There is little connection between religion and reported levels of overeating. Nearly six-in-ten highly religious adults (58%) say they overate recently, identical to the share of less religious adults who say the same. Similarly, there are few differences on this question among respondents from various religious traditions. 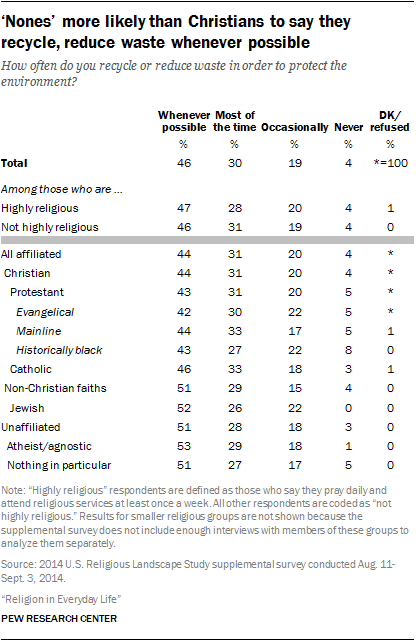 There is very little connection between religion and the way Americans say they make purchasing decisions. Highly religious adults are no more likely than those who are less religious to say they consider a company’s environmental record or its treatment of its employees when making purchasing decisions. And people from all religious backgrounds prioritize quality and price over environmental concerns and employee wages when deciding what products to buy. 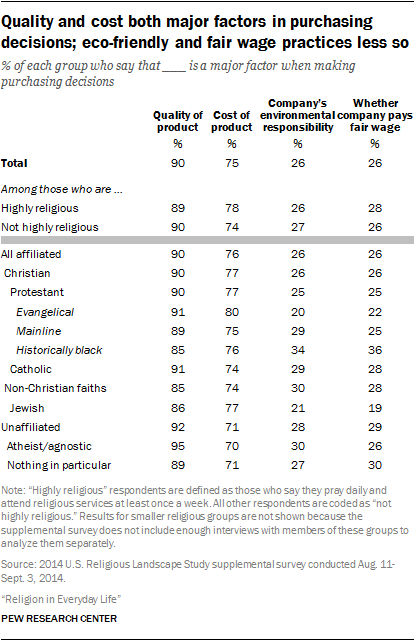 Far fewer Americans say they got angry with God in the past week. There is only a slight difference on this question between those who are highly religious and those who are not.

About eight-in-ten or more members of all Christian groups say they thanked God for something over the course of the previous week, including 96% of those belonging to historically black Protestant churches and 93% of evangelical Protestants. Members of non-Christian faiths and those who identify as religiously unaffiliated are significantly less likely to express gratitude to God in their day-to-day lives, but substantial shares still say they gave thanks in the past week (63% and 37%, respectively). (For data on belief in God among different religious groups, see the Religious Landscape Study.)

When it comes to asking God for help or guidance, members of historically black Protestant churches (91%) and evangelicals (87%) again stand out from other Christian traditions. By comparison, about half of members of non-Christian faiths (51%) and a quarter of religious “nones” (25%) report asking God for help in the past seven days.

Next: 2. Essentials of Christian identity vary by level of religiosity; many ‘nones’ say honesty vital to being a moral person
← Prev Page
Page1You are reading page2Page3Page4Page5Page6
Next Page →