Connections to Catholicism run broad and deep in American society. One-in-five U.S. adults identify Catholicism as their religion. In addition, about one-in-ten are cultural Catholics – people who have a religion other than Catholicism, or no religion, but nevertheless think of themselves as Catholic or partially Catholic in other ways. A similar share of U.S. adults are ex-Catholics – people who were raised in the faith but no longer identify with it in any way. Still others are connected to Catholicism by virtue of having a Catholic spouse, a Catholic parent or through their attendance at Catholic Mass. All told, the new Pew Research Center survey finds, more than four-in-ten American adults are connected to Catholicism in one of these ways.

This chapter explores these different types of connections to Catholicism. It also describes what being Catholic means to those who identify with Catholicism by virtue of their religion, their culture or their ancestry.

One-in-five Americans identify Catholicism as their religion. But many more Americans have connections to Catholicism even though it is not their primary religious affiliation.

Nearly one-in-ten adults (9%) qualify as “cultural Catholics.” When asked about their religion, they identify with a faith other than Catholicism (mainly Protestantism) or say they have no religious affiliation. But on a separate question, they say “yes” when asked if they currently consider themselves “Catholic or partially Catholic” in any way. Most people in the cultural Catholic category (6% of all U.S. adults) were raised Catholic or had a Catholic parent, but some people in this group (3% of all U.S. adults) identify with Catholicism even though they are not Catholic by religion and were not raised Catholic.

An additional 8% of U.S. adults are connected to Catholicism in other ways. This group includes people who say they had a Catholic parent (but that they were not raised Catholic) or have a Catholic spouse or partner. It also includes people who say they attend Mass at least a few times a year despite having no familial or personal ties to Catholicism.

All told, fully 45% of American adults are connected to Catholicism in one of these four ways. 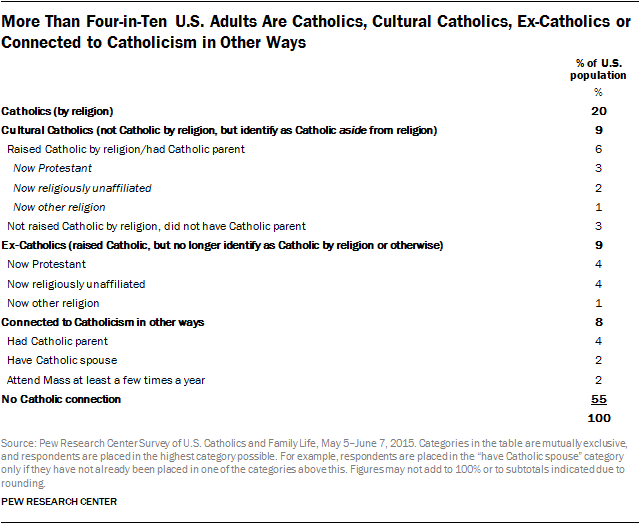 Catholic connections run especially deep among U.S. Latinos. In the current survey, 45% of Latinos identify Catholicism as their religion.5 An additional 13% of Latinos are cultural Catholics, including 11% who were raised Catholic or had a Catholic parent. Nearly one-in-five Latinos in the U.S. are ex-Catholics, raised in the faith but no longer identifying with it (either by religion or otherwise). And an additional 8% of Latinos are connected to Catholicism in other ways, including non-Catholics who have a Catholic parent or spouse or say they attend Mass at least occasionally. Just 16% of Latinos in the U.S. have no connection to Catholicism as measured in the survey. 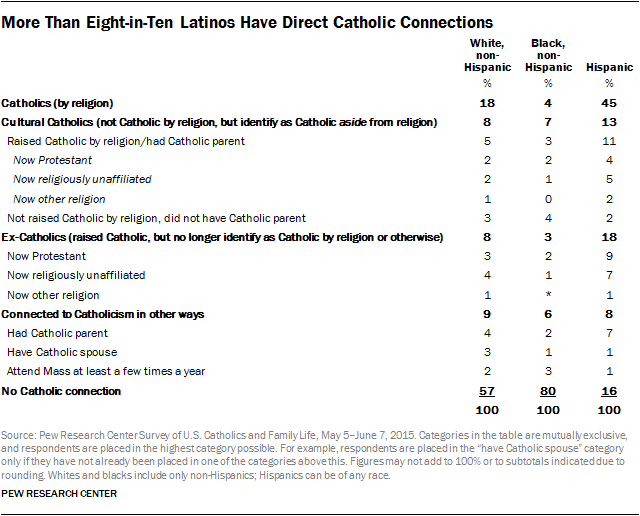 Among those in the Silent generation, nearly a quarter (24%) identify as Catholic. Only 3% of people in the Silent generation are ex-Catholics, compared with roughly one-in-ten Baby Boomers, Generation Xers and Millennials. Millennials are less likely than members of older generational cohorts to identify as Catholic by religion (15%). But nearly three-in-ten Millennials are cultural Catholics (10%), ex-Catholics (9%) or people with other kinds of Catholic connections (9%), comparable to the shares of Generation Xers and Baby Boomers in these categories. 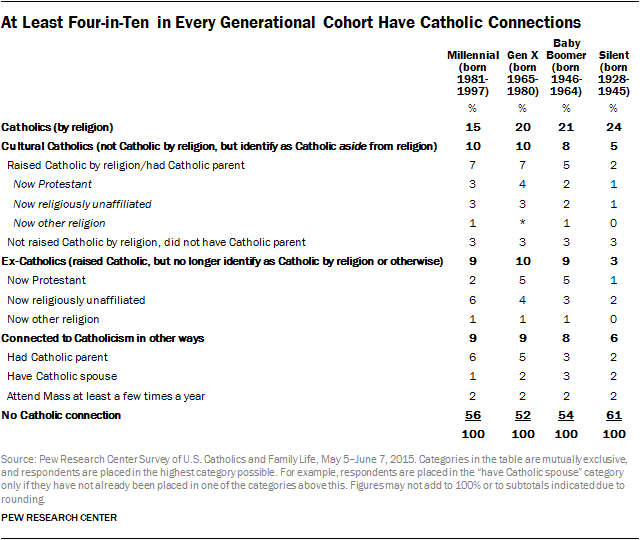 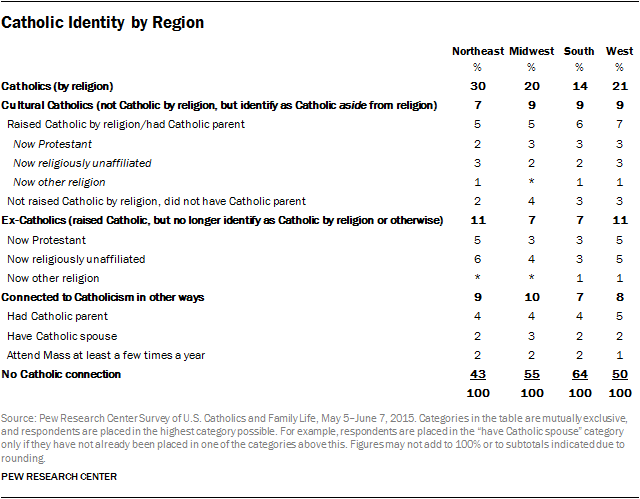 In What Sense Are Cultural Catholics Catholic?

Adults who are cultural Catholics – those whose primary religious identity is something other than Catholic but who nonetheless say they consider themselves Catholic or partially Catholic in some way – report a variety of reasons for their Catholic identity, including having a Catholic family background (43%), having an affinity for Catholicism (24%) and holding certain Catholic beliefs or participating in various Catholic rituals (12%). But there are important differences between cultural Catholics who were raised Catholic or had a Catholic parent and those without this family connection.

When asked why they consider themselves Catholic today, cultural Catholics who were not raised in the faith most often express a general affinity for Catholicism (36%). This includes 15% who see similarities or connections between their own faith and Catholicism, 10% who say their own values and morals align with those of the church and 9% who see themselves as Catholic by virtue of their Christian beliefs or practices (e.g., belief in God).

About one-in-eight cultural Catholics who were not raised in the faith (13%) name participation in specific kinds of Catholic activities as the basis for their Catholic identity. This includes 6% who say the sacraments are important in their lives and 5% who say they attend or attended a Catholic church. 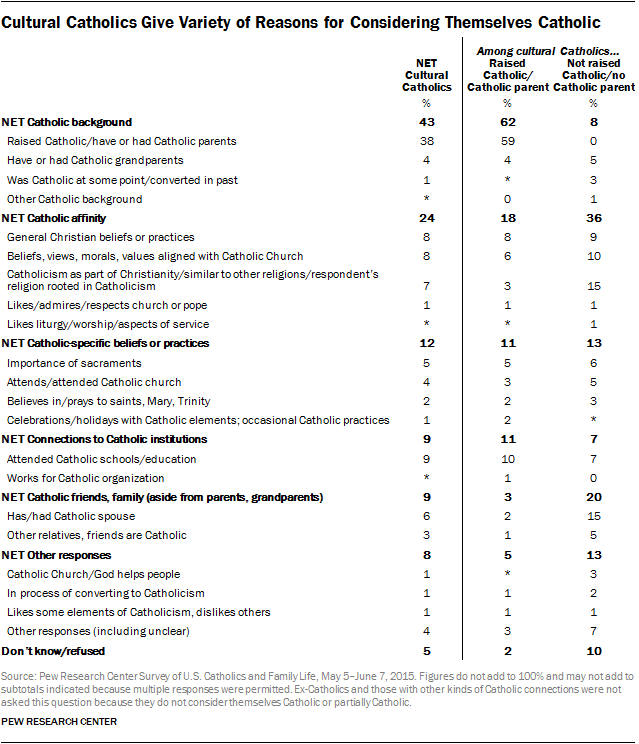 Is Being Catholic Mainly a Matter of Religion, Culture or Ancestry?

But half of all Catholics (49%) appear to view the affiliation in a less spiritual manner, saying that being Catholic is mainly a matter of ancestry (28%), culture (21%) or both (1%). 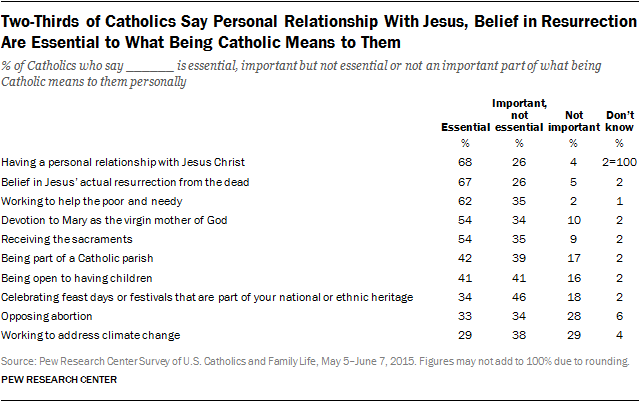 About four-in-ten Catholics say being part of a Catholic parish (42%) and being open to having children (41%) are essential to their Catholicism, while roughly a third mention celebrating feast days and festivals that are part of their national or ethnic heritage (34%). A third or fewer say opposing abortion (33%) and working to address climate change (29%) are essential to what being Catholic means to them. 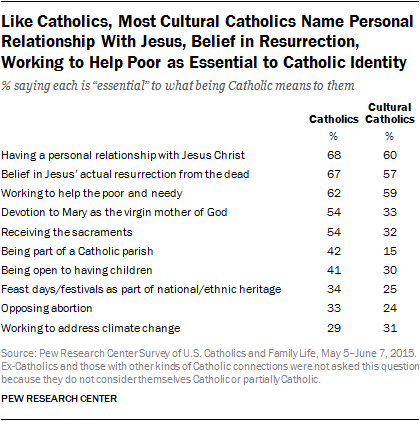 In general, cultural Catholics are less likely than Catholics by religion to describe various beliefs and practices as “essential” to what being Catholic means to them. But the elements of Catholicism that are most essential to Catholics – having a personal relationship with Jesus, belief in the Resurrection and working to help the poor and needy – also are those most commonly cited by cultural Catholics. 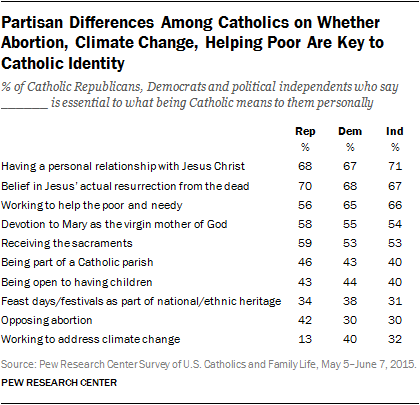 By contrast, opposition to abortion factors more prominently in Catholic Republicans’ sense of Catholic identity than it does for Catholic Democrats and independents. Four-in-ten Catholic Republicans (42%) say opposition to abortion is essential to what being Catholic means to them, compared with 30% of both Catholic Democrats and independents. Partisan differences are smaller on other questions about the things that are essential to people’s Catholic identity.

Connections to the Church: Lifelong Commitments and Lasting Departures 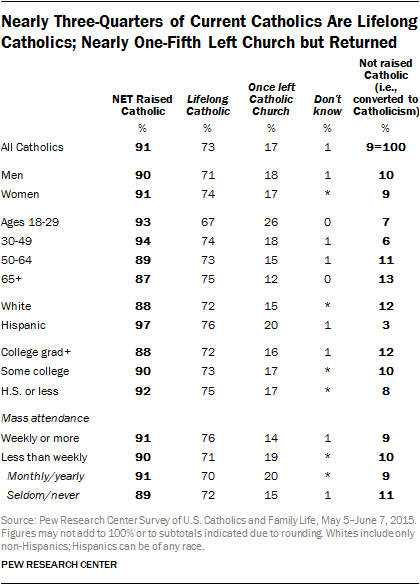 The new study provides an opportunity to assess how many people who leave Catholicism ultimately wind up returning to the fold. The survey asked Catholics whether there ever was a time in their lives when they did not consider themselves Catholic. Among people who currently are Catholic, nearly one-in-five (17%) were raised Catholic and once left the faith before ultimately returning to it. Nearly three-quarters of Catholics are lifelong Catholics – cradle Catholics who never left the church. And about one-in-ten Catholics (9%) are converts to the faith. 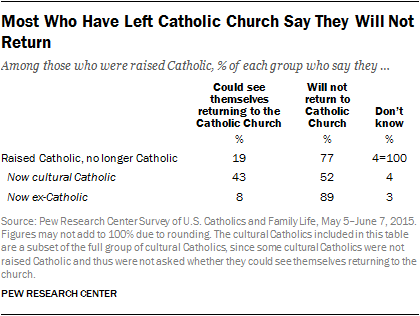 Next: Chapter 2: Participation in Catholic Rites and Observances
← Prev Page
Page1You are reading page2Page3Page4Page5Page6Page7Page8
Next Page →