Roughly nine-in-ten U.S. Catholics say they believe in the concept of sin – that there are actions or deeds that can be offensive to God. But there is less unanimity among Catholics about which specific actions or behaviors constitute a sin. For example, while most Catholics say abortion is sinful, they are divided as to whether homosexual behavior is a sin. They also are divided on the question of whether buying luxury goods without giving to the poor constitutes a sin.

And when asked about some behaviors that have long been condemned by the Catholic Church as sinful, Catholics do not always agree with the church. For example, there are more Catholics who say it is not sinful to get remarried after a divorce without first obtaining an annulment (49%) than say it is sinful (35%). In addition, more than half of Catholics say living with a romantic partner outside of marriage is not sinful. And fully two-thirds of Catholics say it is not a sin to use contraceptives.

This chapter explores attitudes about sin in more detail, focusing on beliefs about the very concept of sin as well as on the sinfulness of specific sexual and reproductive behaviors, the sinfulness of various marital and living arrangements and what might be thought of as sins of excess.

Belief in the Concept of Sin

Roughly nine-in-ten Catholics (and more than three-quarters of U.S. adults overall) say they believe in the concept of sin.

Looking at the public as a whole, the survey shows that belief in sin is somewhat less common among adults under the age of 30 than among older adults. Whites are somewhat less likely to express belief in sin than blacks and Hispanics, though large majorities in all three racial and ethnic groups believe some actions are offensive to God.

Views on Which Behaviors Qualify as Sins 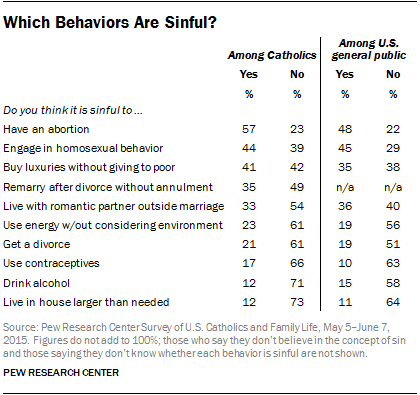 Nearly six-in-ten Catholics say having an abortion is a sin. Among the U.S. public as a whole, by comparison, about half (48%) say abortion is sinful.

A majority of Catholics (54%) also say living with a romantic partner outside of marriage is not sinful. On this question, Catholics are even more accepting of cohabitation than the general public. And Catholics are as likely as the public as a whole to say using contraceptives is not a sin, with fully two-thirds of Catholics expressing this opinion. 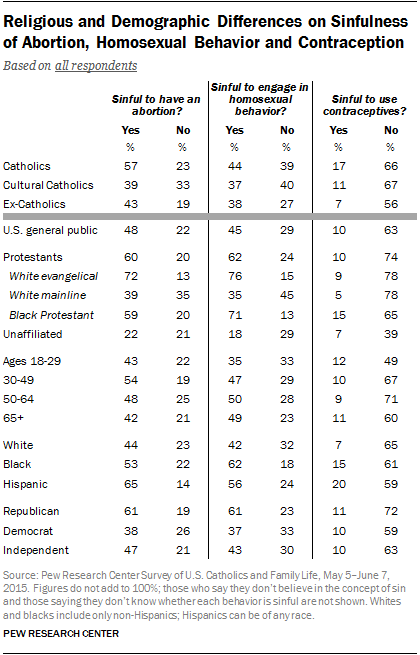 Compared with Catholics, cultural Catholics and ex-Catholics are less likely to say it is a sin to have an abortion or use contraceptives.

Compared with Catholics and Protestants, the religiously unaffiliated are much less likely to believe in the concept of sin. Nevertheless, roughly a fifth of the unaffiliated say having an abortion and engaging in homosexual behavior are sinful (22% and 18%, respectively), and only 7% find the use of contraceptives sinful. 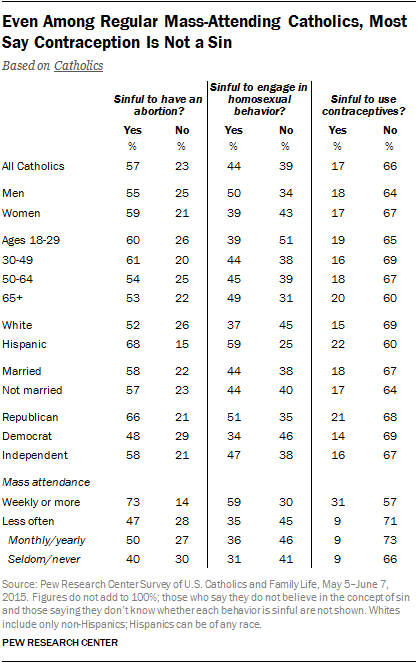 These age differences are not seen, however, in Catholics’ attitudes about abortion. In fact, Catholics under age 50 are slightly more likely than older Catholics to say that having an abortion is a sin.

As is the case among the public as a whole, Catholic Republicans are much more inclined than Catholic Democrats to say abortion (66% vs. 48%) and homosexual behavior (51% vs. 34%) are sinful. There is little partisan division, however, in views toward contraception; about two-thirds of Catholic Republicans, Democrats and independents say using contraceptives is not a sin.

Sinfulness of Cohabitation and Divorce 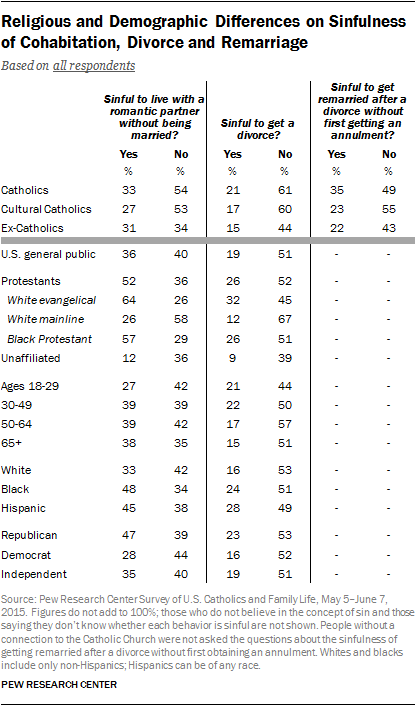 A third of Catholics (and 36% of the public as a whole) say it is a sin to live with a romantic partner without getting married. But more than half of Catholics (54%) say this living arrangement is not sinful. By comparison, about half of Protestants (52%) say cohabitation is sinful, while more than a third (36%) say it is not.

Among the U.S. population as a whole, young adults are especially accepting of cohabitation. Only about a quarter of adults under age 30 (27%) say living with a partner outside of marriage is sinful, compared with roughly four-in-ten older adults. 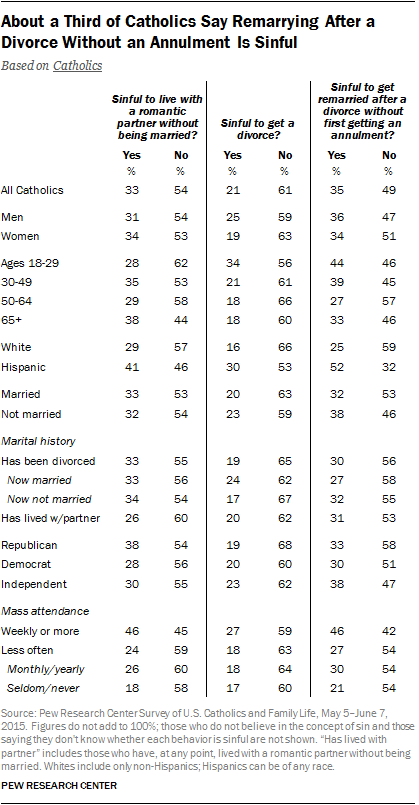 Catholics who attend Mass at least weekly are more likely than those who attend less often to say divorce is a sin. But even among frequent Mass attenders, about six-in-ten do not think it is sinful to get a divorce.

Catholics who attend Mass at least once a week are divided over the sinfulness of cohabitation (46% say it is sinful, 45% say it is not) and remarrying without an annulment (46% vs. 42%). By contrast, among Catholics who attend Mass less than once a week, half or more say cohabitation and remarriage without an annulment are not sinful (59% and 54%, respectively).

Catholic adults under the age of 30 express somewhat greater reservations about divorce than do older Catholics. Roughly a third of those under age 30 (34%) say they believe getting a divorce is a sin, compared with 18% of those ages 50 and older.

Since becoming pope, Francis has continually exhorted Catholics and others to be attentive to the impact their lifestyles have on the poor, the marginalized and the environment. The survey included several questions designed to gauge whether Catholics and those who feel connected to the faith believe that failing to live up to these standards constitutes sinful behavior.

Catholics are divided as to whether it is sinful to spend money on luxuries without also giving to the poor; 41% say this is a sin, while 42% say it is not. Catholics’ views on this question closely mirror those of Protestants. 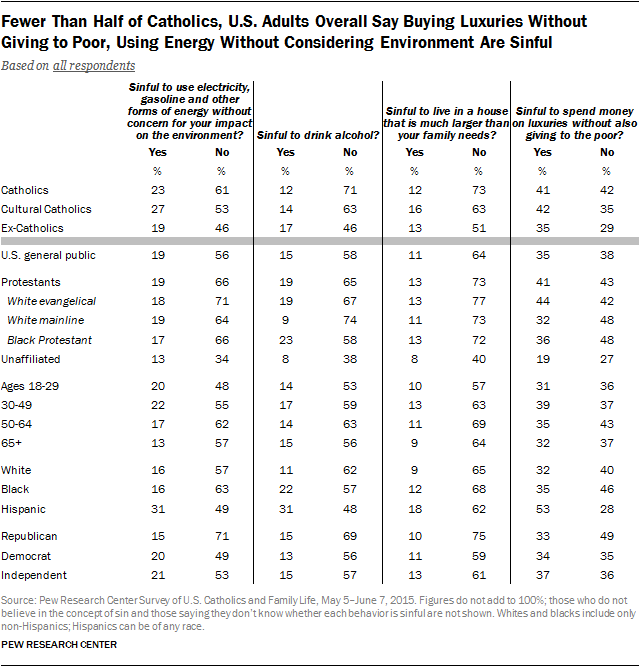 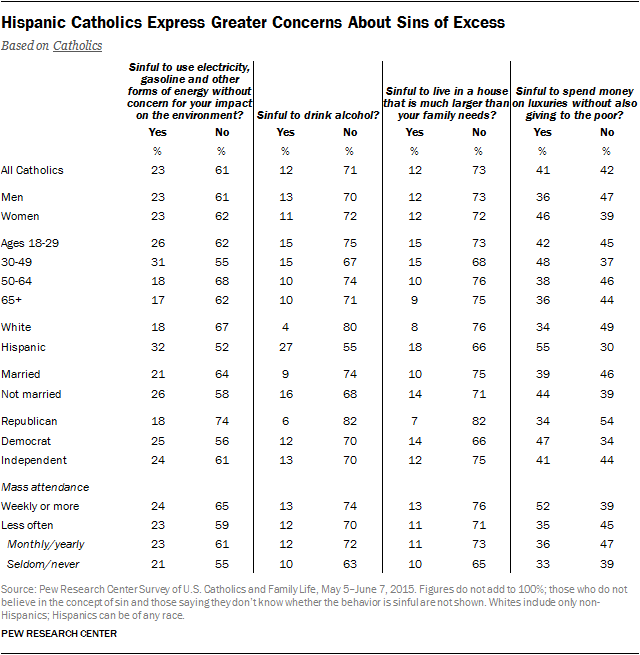 Next: Appendix A: Methodology
← Prev Page
Page1Page2Page3Page4Page5You are reading page6Page7Page8
Next Page →

U.S. Catholics Open to Non-Traditional Families Chapter 1: Exploring Catholic Identity Chapter 2: Participation in Catholic Rites and Observances Chapter 3: Family Matters Chapter 4: Expectations of the Church
Chapter 5: Beliefs About Sin
Belief in the Concept of SinViews on Which Behaviors Qualify as SinsSinfulness of Abortion, Homosexuality, ContraceptionSinfulness of Cohabitation and DivorceSins of Excess
Appendix A: Methodology Appendix B: Glossary