A similar pattern is seen on some other measures of observance of Catholic rituals, such as saying it would be important to receive the anointing of the sick if they were seriously ill. Many cultural Catholics place importance on this ritual, but relatively few ex-Catholics do the same.

This chapter looks at the participation of Catholics, cultural Catholics and ex-Catholics in a variety of Catholic rites and observances. It also examines differences among Catholic demographic groups on these measures and others, including style of prayer and whether a sense of familial obligation ever compels them to partake in Catholic activities.

Most questions in this chapter were asked only of Catholics and those with a connection to Catholicism; for these questions, comparisons to other religious groups and the U.S. general public are not available. 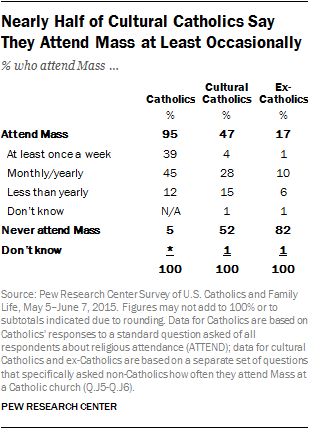 In contrast with cultural Catholics, the vast majority of ex-Catholics (82%) say they never attend Mass.

Among Catholics, a somewhat larger share of women than men report attending Mass on a weekly basis (43% vs 35%). And Catholics ages 65 and older are much more likely to say they attend weekly (49%) than Catholics under the age of 30 (30%). 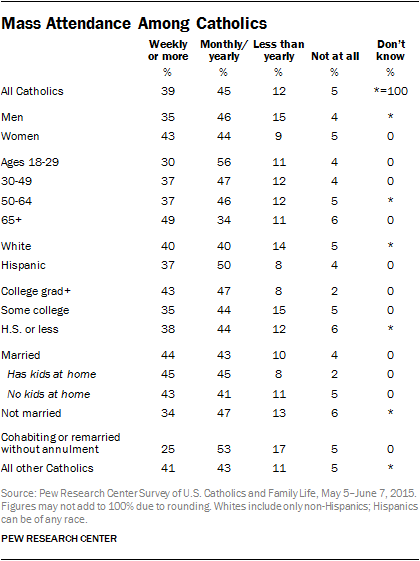 Marital status also is associated with frequency of Mass attendance. Among married Catholics, 44% say they attend weekly or more, compared with 34% of Catholics who are not currently married. And Catholics who report that they are currently living with a partner outside of marriage or who have been divorced and remarried without having sought an annulment from the Catholic Church are less likely than other Catholics to say they attend Mass on a weekly basis (25%, compared with 41% of all other Catholics). 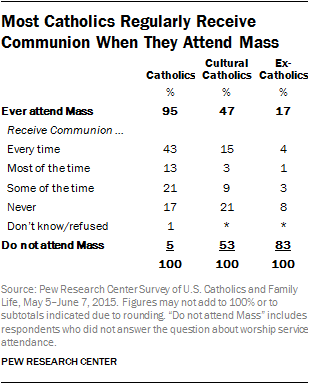 Among Catholics, regular taking of Communion is more common among whites than Hispanics. Fully 56% of white Catholics say they receive the Eucharist every time they attend Mass, and an additional 16% say they receive the sacrament most of the time. By contrast, among Hispanic Catholics (who attend weekly Mass at about the same rate as white non-Hispanic Catholics), most say they take Communion only some of the time they attend Mass (35%) or that they never receive the sacrament (27%). 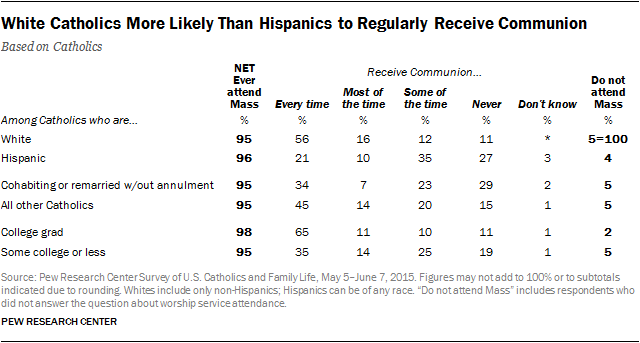 Two-thirds of Catholic college graduates say they receive Communion every time they attend Mass. By contrast, among Catholics with less education, only about one-third receive the Eucharist every time they are at Mass (35%).

Confession, Lenten Observances and Anointing of the Sick 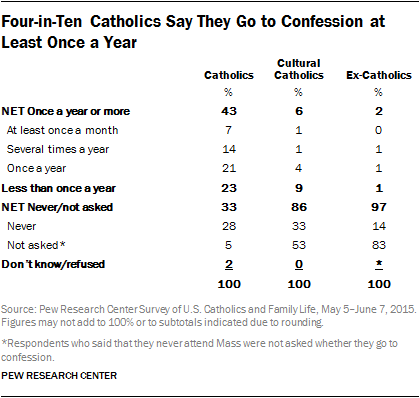 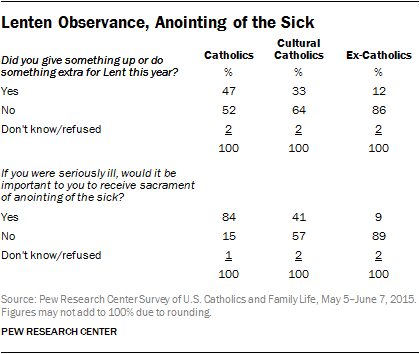 The survey shows that among Catholics, there are some differences between demographic groups on these measures of participation and observance. Catholic women are somewhat more likely than Catholic men to say they would want the anointing of the sick, while younger Catholics are less likely than their elders to say the same. More whites than Latinos say they gave something up or did something extra in observance of Lent this year.

On the whole, the differences between demographic subgroups of Catholics are relatively modest on these questions. But Catholics who attend Mass regularly are, not surprisingly, far more likely than less-frequent attenders to say they go to confession at least once a year, participate in Lenten observances and would want to receive the anointing of the sick.

Prayers of the Faithful 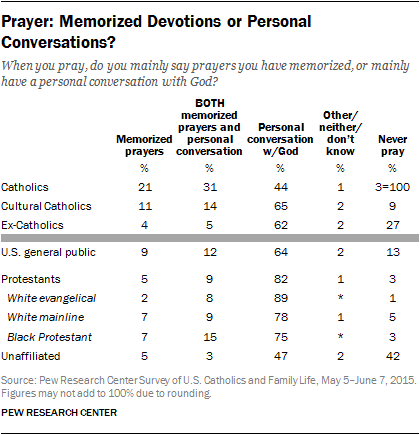 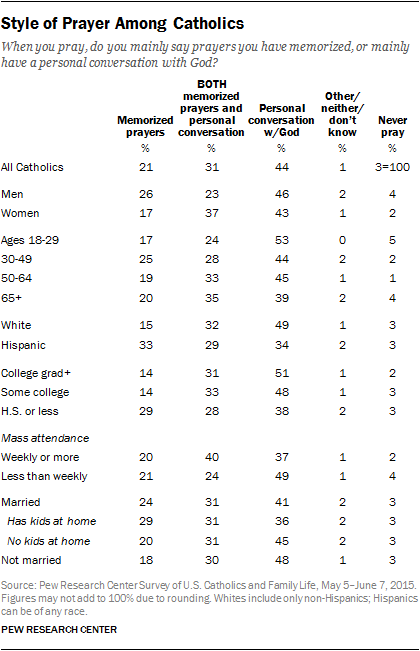 Participating in Catholic Activities Out of a Sense of Familial Obligation 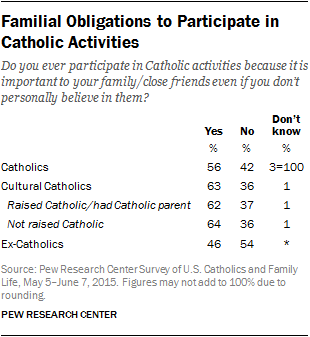 The survey did not specify which kinds of Catholic activities respondents may participate in out of a sense of obligation to friends or family. Such activities could include going to Mass or attending baptisms, weddings, funerals, holiday observances or other events.

The survey shows that among Catholics, participating in religious activities to please family or friends is common across a variety of demographic groups. More than half of Catholic men and women say they do this, as do majorities in most age groups. About half or more of white Catholics and Hispanic Catholics say they sometimes participate in Catholic activities out of a sense of obligation to others. Even among Catholics who attend Mass most often, who are presumably among those most likely to believe in the efficacy of participating in Catholic activities, 56% say they sometimes do this out of a sense of obligation to others.

U.S. Catholics Open to Non-Traditional Families Chapter 1: Exploring Catholic Identity
Chapter 2: Participation in Catholic Rites and Observances
Mass Attendance and Receiving CommunionConfession, Lenten Observances and Anointing of the SickPrayers of the FaithfulParticipating in Catholic Activities Out of a Sense of Familial Obligation
Chapter 3: Family Matters Chapter 4: Expectations of the Church Chapter 5: Beliefs About Sin Appendix A: Methodology Appendix B: Glossary