The American Trends Panel (ATP), created by the Pew Research Center, is a nationally representative panel of randomly selected U.S. adults recruited from landline and cell phone random digit dial surveys. Panelists participate via monthly self-administered Web surveys. Panelists who do not have internet access are provided with a tablet and wireless internet connection. The panel is being managed by GfK.

Data in this report are drawn from the panel wave conducted January 29-February 13, 2018, among 4,656 respondents. The margin of sampling error for the full sample of 4,656 respondents is plus or minus 2.4 percentage points.

The ATP data were weighted in a multi-step process that begins with a base weight incorporating the respondents’ original survey selection probability and the fact that in 2014 some panelists were subsampled for invitation to the panel. Next, an adjustment was made for the fact that the propensity to join the panel and remain an active panelist varied across different groups in the sample. The final step in the weighting uses an iterative technique that aligns the sample to population benchmarks on a number of dimensions. Gender, age, education, race, Hispanic origin and region parameters come from the U.S. Census Bureau’s 2016 American Community Survey. The county-level population density parameter (deciles) comes from the 2010 U.S. decennial census. The telephone service benchmark comes from the July-December 2016 National Health Interview Survey and is projected to 2017. The volunteerism benchmark comes from the 2015 Current Population Survey Volunteer Supplement. The party affiliation benchmark is the average of the three most recent Pew Research Center general public telephone surveys. The internet access benchmark comes from the 2017 ATP Panel Refresh Survey. Respondents who did not previously have internet access are treated as not having internet access for weighting purposes. Sampling errors and statistical tests of significance take into account the effect of weighting. Interviews are conducted in both English and Spanish, but the Hispanic sample in the American Trends Panel is predominantly native born and English speaking. 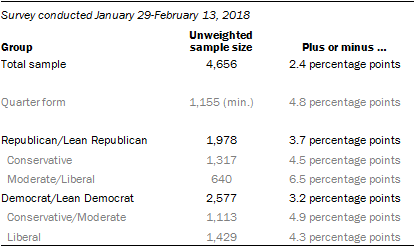 The analysis in this report is based on telephone interviews conducted March 7-14, 2018, among a national sample of 1,466 adults, 18 years of age or older, living in all 50 U.S. states and the District of Columbia (384 respondents were interviewed on a landline telephone, and 1,082 were interviewed on a cell phone, including 653 who had no landline telephone). The survey was conducted under the direction of ICF Incorporated. A combination of landline and cellphone random digit dial samples were used; both samples were provided by Marketing Systems Group. Interviews were conducted in English and Spanish. Respondents in the landline sample were selected by randomly asking for the youngest adult male or female who is now at home. Interviews in the cell sample were conducted with the person who answered the phone, if that person was an adult 18 years of age or older. For detailed information about our survey methodology, see https://www.pewresearch.org/methodology/u-s-survey-research/

The combined landline and cellphone sample are weighted using an iterative technique that matches gender, age, education, race, Hispanic origin and nativity and region to parameters from the 2016 Census Bureau’s American Community Survey and population density to parameters from the decennial census. The sample also is weighted to match current patterns of telephone status (landline only, cell phone only, or both landline and cell phone), based on extrapolations from the 2016 National Health Interview Survey. The weighting procedure also accounts for the fact that respondents with both landline and cell phones have a greater probability of being included in the combined sample and adjusts for household size among respondents with a landline phone. The margins of error reported and statistical tests of significance are adjusted to account for the survey’s design effect, a measure of how much efficiency is lost from the weighting procedures. 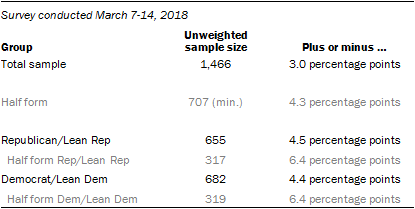 [3] White, non-Hispanic college graduates were subsampled at a rate of 50%.

[4] Approximately once per year, panelists who have not participated in multiple consecutive waves are removed from the panel. These cases are counted in the denominator of cumulative response rates.

Next: Appendix A: Measures and scales
← Prev Page
Page3Page4Page5Page6Page7Page8Page9Page10Page11You are reading page12Page13
Next Page →

The Public, the Political System and American Democracy 1. Democracy and government, the U.S. political system, elected officials and governmental institutions 2. Views of American democratic values and principles 3. Elections in the U.S.: Priorities and performance 4. Democracy, the presidency and views of the parties 5. The Electoral College, Congress and representation 6. Quality and responsiveness of elected officials 7. Democratic debates and the stakes of politics 8. The tone of political debate, compromise with political opponents 9. The responsibilities of citizenship 10. Political engagement, knowledge and the midterms
Methodology
Appendix A: Measures and scales