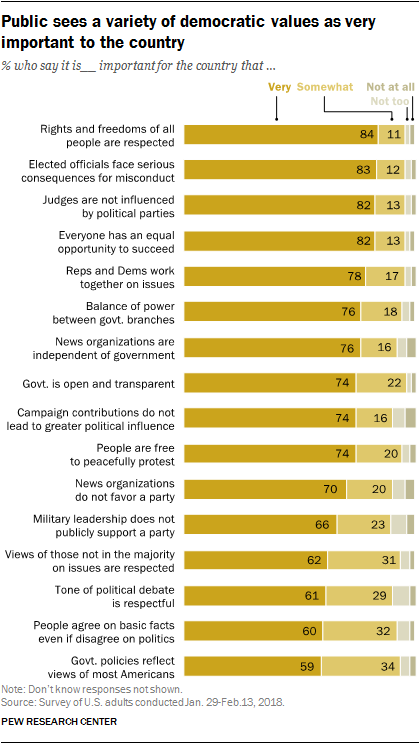 The public places great importance on a broad range of democratic ideals and principles in the United States today. Across 16 democratic values asked about in the survey – including respecting the rights of all, having a balance of power across government branches and having officials face serious consequences for misconduct – large majorities say these are very important for the country.

But evaluations of how well the country is upholding these values are decidedly mixed. And when it comes to ideals more squarely in the political arena, such as an unbiased news media, partisan cooperation and respectful political debate, broad majorities of the public – including large shares of both Republicans and Democrats – say the country is falling short.

Nine-in-ten or more say each of the 16 items is at least somewhat important for the country. About eight-in-ten or more say it is very important for the country that the rights and freedoms of all are respected (84%), officials face serious consequences for misconduct (83%), that judges are not influenced by political parties (82%), and that everyone has an equal opportunity to succeed (82%).

Comparably large shares also say it is very important that the government is open and transparent (74%) and that people who give a lot of money to elected officials do not have more political influence than other people (74%).

The public is relatively less likely to emphasize the importance of respecting the views of those who are not in the majority, respectful tone in political discourse, shared acceptance of basic facts, and government policies that reflect the views of most Americans. Still, roughly 90% call these principles at least somewhat important, including about six-in-ten who say each is very important. 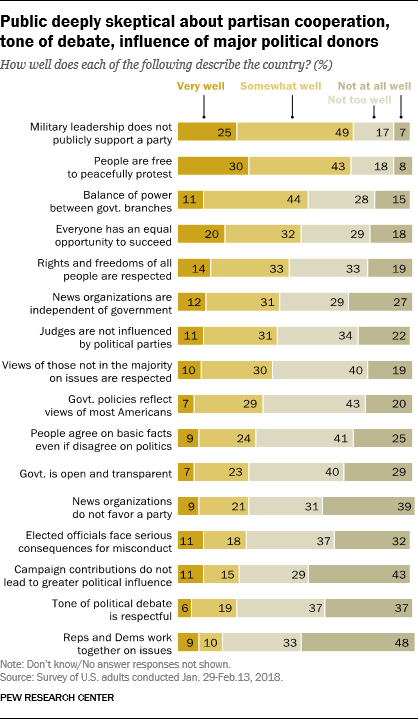 About three-quarters say the U.S. is described very or somewhat well by the phrases “military leadership does not publicly express support for one party over the other” (74%) and “people are free to peacefully protest” (73%).

More than half (55%) say the executive, legislative and judicial branches of government keep the others from having too much power; and 52% think the country is described well by the phrase “everyone has an equal opportunity to succeed.

However, for the remaining 12 of 16 democratic ideals and principles included in the survey, majorities say they describe the country as doing not too or not at all well.

Larger majorities say that an open and transparent government (69%) and news organizations that do not favor a political party (70%) do not describe the country well.

Some of the public’s most negative judgements are reserved for values that are most squarely in the political sphere. Large majorities do not see partisan cooperation (80%) or respectful political debate (74%) as describing the country well. Similarly, 72% say the country is not well described as a place where people who contribute to campaigns do not have more influence than other people; 69% also say the phrase “elected officials face serious consequences for misconduct” does not describe the country well. 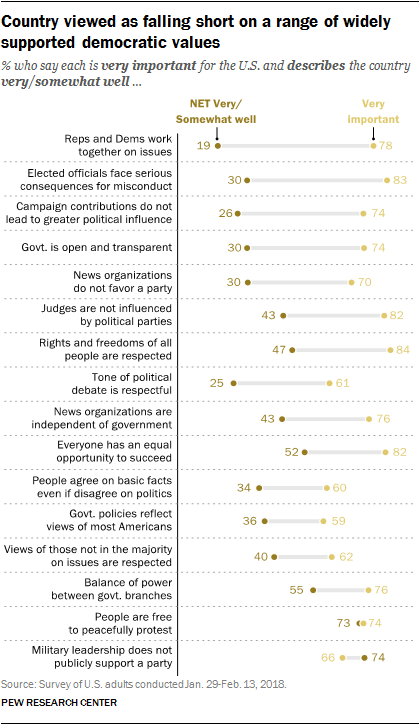 In general, there are wide gaps between the importance the public places on a value and public perception of how well the country reflects that value.

Nearly eight-in-ten (78%) say it is very important for Republicans and Democrats to work together on issues, but the public is 59 percentage points less likely to say partisan cooperation describes the country very or fairly well (19%). Such wide gaps characterize a range of issues across dimensions.

There are a few exceptions to this pattern. There is no gap in the shares who say the right to peaceful protest is very important (74%) and say it describes the country well (73%). And nonpartisan military leadership is the only democratic ideal for which more say this describes the country very or somewhat well (74%) than say it is very important (66%). 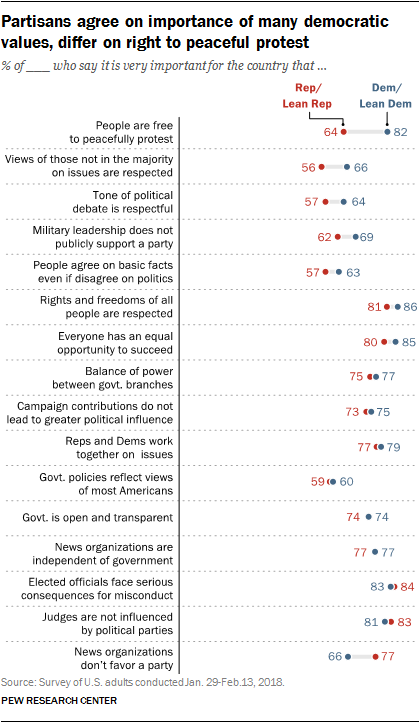 On the whole, Republicans and Democrats largely agree on the importance of many democratic values. A majority within each partisan coalition says that each of the 16 items included in the survey is very important to the country.

However, there are a handful of significant differences between the views of partisans. One of the largest is over the importance of the right to protest. About eight-in-ten Democrats and Democratic leaners (82%) say it’s very important that people are free to peacefully protest, compared with a smaller 64% majority of Republicans and Republican leaners (another 29% of Republicans say this is somewhat important).

Democrats also are somewhat more likely than Republicans to say it is very important that the views of those who are not in the majority on issues are respected (66% vs. 56%).

By contrast, Republicans are more likely than Democrats to say it is very important that news organizations do not favor one political party (77% vs. 66%).

Sizable partisan gaps on whether all have an equal opportunity for success, people’s rights are respected 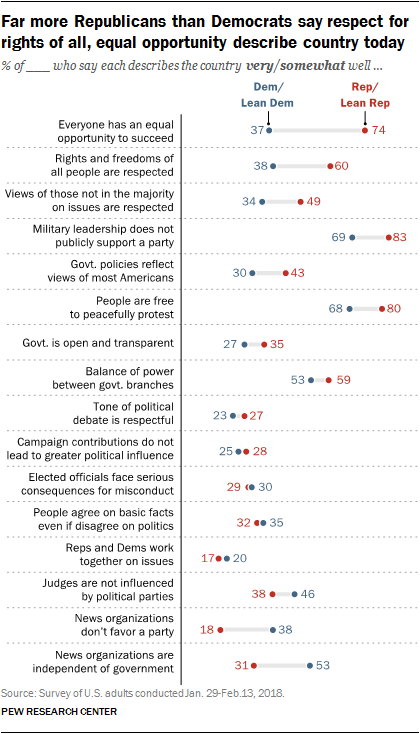 There are bigger gaps between the views of Republicans and Democrats when it comes to how well the country is doing in living up to many democratic ideals and principles.

Most Republicans and Republican leaners say the phrases “everyone has an equal opportunity to succeed” (74%) and “the rights and freedoms of all people are respected” (60%) describe the country well.

Democrats and Democratic leaners disagree: Just 37% think the country merits being described as a place with equal opportunity, and only 38% say the country is described well as a place where the right and freedoms of all are respected.

Larger majorities of Republicans than Democrats also say the country is described well as a place where military leadership does not publicly express partisan preferences (83% vs. 69%) and where people are free to peacefully protest (80% vs. 68%). About half of Republicans (49%) think the description of the U.S. as a place where the views of those not in the majority are respected applies; about a third of Democrats (34%) say the same.

However, there are a number of values on which there is little difference in the views of Republicans and Democrats. In particular, similar shares of those in both parties say descriptions of partisan cooperation, respectful political debate, basic agreement on facts, limits on the political influence of money and serious consequences for official misconduct do not describe the country well. 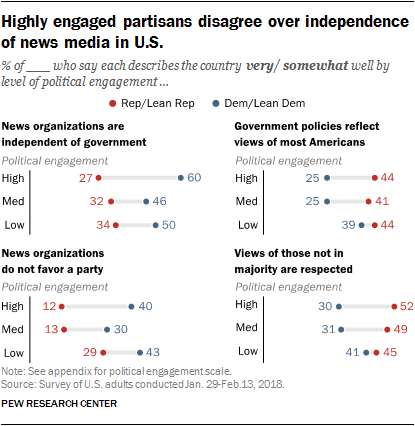 In several areas, especially on items related to news organizations, partisan differences are even larger among those who are highly engaged politically.

When it comes to whether news organizations in the country are independent of government influence, 60% of highly engaged Democrats say this describes the country very or fairly well, compared with just 27% of highly engaged Republicans – an opinion gap of 33 percentage points. Divides in views are more modest between Republicans and Democrats with medium (14 points) or low (16 points) levels of political engagement.

There also is a substantial partisan divide among those with high or medium levels of political engagement over whether government policies in the country today reflect the views of most Americans and whether the views of those not in the majority are respected. However, among Republicans and Democrats with low levels of political engagement, there are very modest differences in views.

Similar patterns are seen in views of equal opportunity and whether the rights and freedoms of all are respected. More politically engaged Democrats are less likely than less engaged Democrats to say these descriptions apply to the U.S.

Age and views of democratic ideals and principles

There is general agreement across age groups about the importance of key democratic values. Large majorities of both old and young say each of the 16 items included in the survey is very or somewhat important for the U.S. However, on many items, there are differences in the shares describing a number of values as “very important,” with older adults more likely to place higher levels of importance on an item than younger adults. 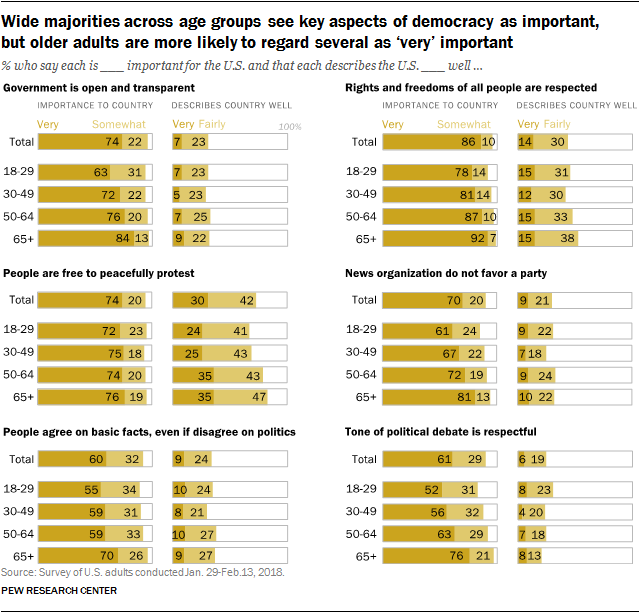 For example, while large majorities of 90% or more say transparent governance is important, those 65 and older are more than 20 percentage points more likely than those under 30 to call this very important (84% vs. 63%). In views of people agreeing on “basic facts” even if they disagree on politics, sizable majorities across age categories regard this as important, but 70% of those 65 and older say it is very important, compared with no more than about six-in-ten in younger age groups.

However, there are exceptions to this general pattern. There are no significant differences in views of the importance of people having the right to protest peacefully – about three-quarters in each category regard this as very important.

There are modest age differences in evaluations of how well the country is doing in living up to these democratic values. On the right to peacefully protest, for example, about eight-in-ten of those 50 and older (79%) say it describes the U.S. well, compared with a smaller majority (68%) of those under 50.

Next: 3. Elections in the U.S.: Priorities and performance
← Prev Page
Page1Page2You are reading page3Page4Page5Page6Page7Page8Page9Page10
Next Page →

The Public, the Political System and American Democracy 1. Democracy and government, the U.S. political system, elected officials and governmental institutions
2. Views of American democratic values and principles
Partisan differences in views of democratic valuesSizable partisan gaps on whether all have an equal opportunity for success, people’s rights are respectedPolitical engagement, partisanship and assessments of democratic valuesAge and views of democratic ideals and principles
3. Elections in the U.S.: Priorities and performance 4. Democracy, the presidency and views of the parties 5. The Electoral College, Congress and representation 6. Quality and responsiveness of elected officials 7. Democratic debates and the stakes of politics 8. The tone of political debate, compromise with political opponents 9. The responsibilities of citizenship 10. Political engagement, knowledge and the midterms Methodology Appendix A: Measures and scales