These views are little changed since a CNN/ORC survey conducted in the weeks following the 2016 presidential election in which Donald Trump won the Electoral College but lost the popular vote. But the public expresses somewhat less support for moving to a popular vote than it did in 2011 (62%).

The movement in overall opinion since 2011 has been driven by changes among Republicans and Republican-leaning independents. Seven years ago Republicans were more divided in their views (43% keep current system, 54% change to popular vote). But in the wake of the 2016 election, the share of Republicans supporting a constitutional amendment to move to a popular vote dropped to just 27%. Today, 32% of Republicans say the Electoral College should be eliminated, while 65% say the current system should be maintained.

Three-quarters of Democrats and Democratic leaners (75%) say the Constitution should be amended so the candidate with the most overall votes wins, little different than in prior surveys conducted over the past 18 years (the question was first asked shortly after the 2000 election, in which George W. Bush became president after winning a majority of votes in the Electoral College; Al Gore narrowly won the popular vote). 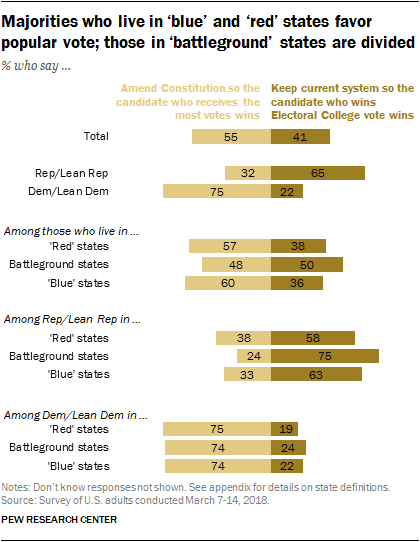 Public support for shifting to the popular vote to determine the winner of presidential elections is higher in states that are less politically competitive under the current system. About six-in-ten of those in both “red” (57%) and “blue” (60%) states (those that solidly vote either Republican or Democratic, respectively) support moving to a popular vote. By contrast, only about half (48%) of those living in battleground states say this.

Should the allocation of Senate seats or the size of the House be changed? 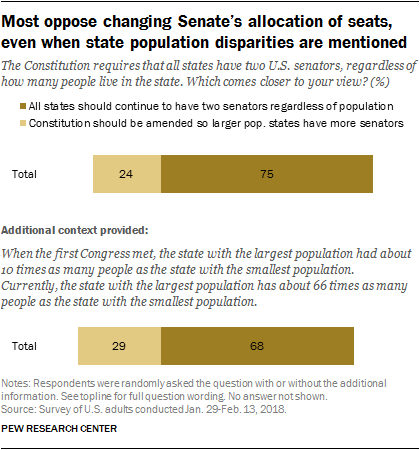 Most Americans reject the idea of changing the way Senate seats are allocated. Public attitudes about this question of representation are only modestly different when respondents are presented with information about how the gap in population between the largest and smallest states has changed since the early days of the republic.

Overall, 75% say the current system of equal representation of states should be maintained and 24% say the Constitution should be amended to give states with larger populations more representation in the Senate. 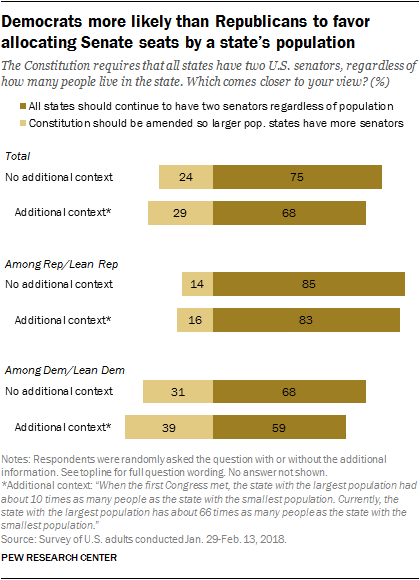 Majorities across all partisan and ideological groups say all states should continue to have two U.S. senators, regardless of population size (and in both versions of the question). But there is a partisan gap in these views.

When the question asks about the current structure of the Senate without additional information, 85% of Republicans and Republican leaners and 68% of Democrats and Democratic leaners say the current system of equal representation of states should be maintained. About one-in-three Democrats (31%) and just 14% of Republicans think the Constitution should be amended so states with larger populations have more senators than smaller states.

Republicans’ views are no different between the versions of the question with and without additional historical information about the population distribution. Among Democrats, however, there is somewhat more support for amending the Constitution to change senatorial apportionment when the changing population distribution is made salient, though this remains a minority position among Democrats (39% support these changes in that case, compared with 31% in the version of the question without that information).

This study includes several survey experiments that present different versions of the same question to different subsets of respondents. One set of experiments involves questions designed to illustrate whether additional information about population influences attitudes about whether changes should be made to the way the number of seats are apportioned in the U.S. Senate or whether the overall size of the U.S. House should be changed.

Respondents were randomly assigned to either a question about the Senate or the House and one of two conditions: 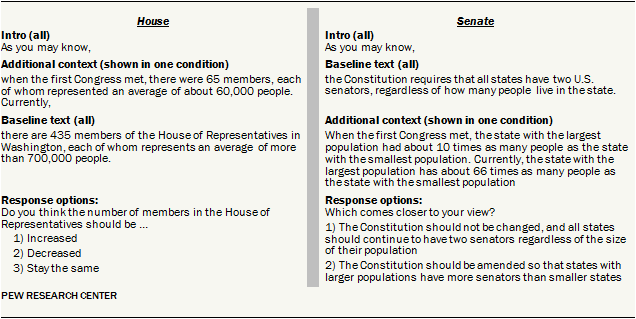 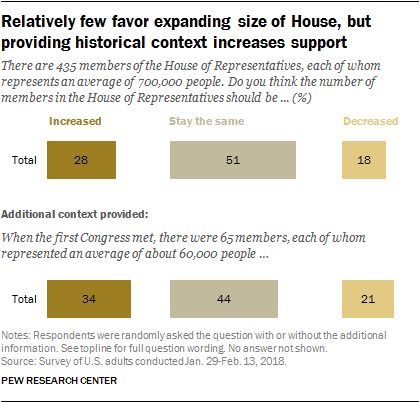 The public’s views shift modestly in the direction of increasing the size of the House in a version of the question that provides additional historical context. When the question notes that there were both fewer members of the House when the first Congress met than there are today (65 then, 435 now) and that each representative then represented a smaller number of constituents (roughly 60,000 then, 700,000 now), 34% say its size should be increased (compared with 28% without the historical sizes). Still, a plurality (44%) say the size should remain the same even with this additional information. The share saying the size of Congress should be decreased also remains about the same (21%). 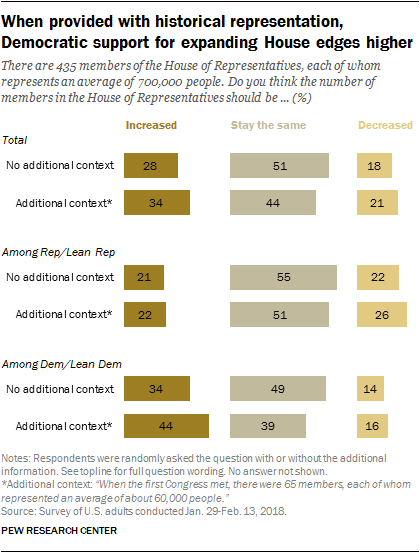 In the version of the question without additional historical context, 55% of Republicans and Republican leaners say the size of the U.S. House should remain the same, while the remainder are about evenly divided: 21% say the number of members should be increased and 22% say decreased. The view that the size should not change also is held by about half of Democrats and Democratic leaners (49%). But Democrats who think the House’s size should change are far more likely to say it should be increased than decreased (34% vs. 14%).

Republicans’ views are no different with the addition of information about the historical size of the House. However, the balance of Democratic opinion shifts somewhat when this information is provided. In this case, 44% of Democrats say the House’s size should be increased (up from 34% without the additional context), while a smaller share say the size should stay the same (39%, down from 49% without the additional context). There is no difference in the share of Democrats across the two conditions who say the House’s size should be decreased.

Next: 6. Quality and responsiveness of elected officials
← Prev Page
Page3Page4Page5You are reading page6Page7Page8Page9Page10Page11Page12Page13
Next Page →