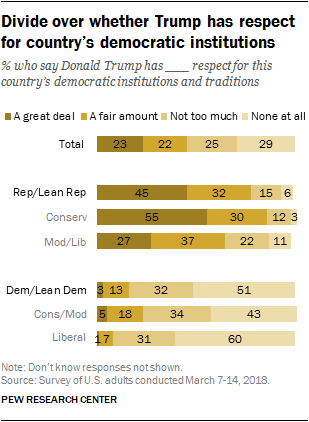 The American public has doubts about Donald Trump’s level of respect for the country’s democratic institutions and traditions. Like all views of Trump, attitudes are deeply partisan; Republicans give the president positive marks in this regard, while Democrats are highly negative.

Overall, 54% say Trump has not too much (25%) or no respect at all (29%) for the nation’s democratic institutions and traditions; somewhat fewer (45%) say he has a great deal (23%) or a fair amount (22%) of respect for them. The share saying Trump has at least a fair amount of respect for the country’s democratic institutions is slightly higher than it was in February 2017, when just 40% took this view.

Democrats and Democratic leaners are highly critical of Trump’s regard for the nation’s democratic system. Just 16% think he has at least a fair amount of respect for the country’s democratic institutions and traditions; 51% say he has none at all, and another 32% say he has not too much. There also are ideological differences among Democrats on this question; liberals (60%) are more likely than moderates and conservatives (43%) to say Trump has no respect at all for the country’s democratic institutions and traditions. 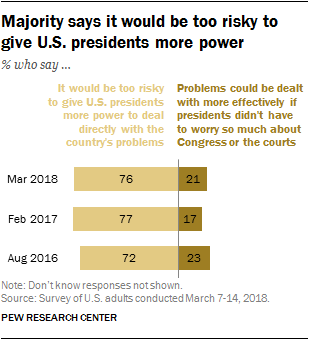 A large majority of Americans say it’s important for there to be a balance of power between the three branches of the federal government. Consistent with this view, most oppose the idea of strengthening the power of the executive branch. Just 21% say that many of the country’s problems could be dealt with more effectively if the president didn’t have to worry so much about Congress or the courts. About three-quarters (76%) say that it would be too risky to give U.S. presidents more power to deal directly with the country’s problems.

Public opposition to strengthening the powers of the presidency has held steady over the past few years. In two previous surveys – conducted in August 2016, during Barack Obama’s final year in office, and in February 2017 – similar shares of the public said it would be too risky to give U.S. presidents more power. 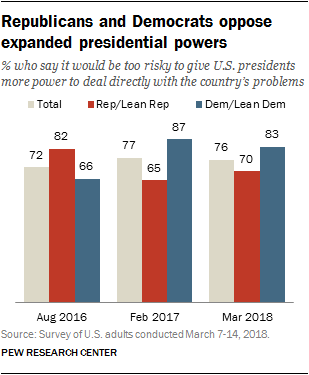 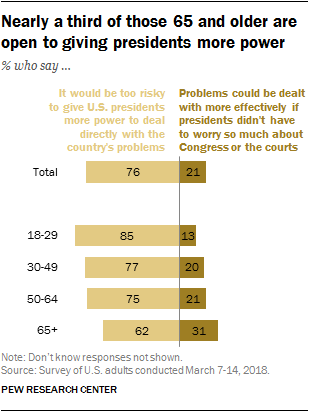 On the whole, younger adults are more cautious about expanding executive power than older adults.

This age dynamic exists within both parties. While partisans across age cohorts say it would be too risky to give presidents more power to deal directly with the country’s problems, Democrats and Republicans younger than 50 are more likely than their older counterparts to hold this view.

Most say the president has large impact on U.S. standing, national mood 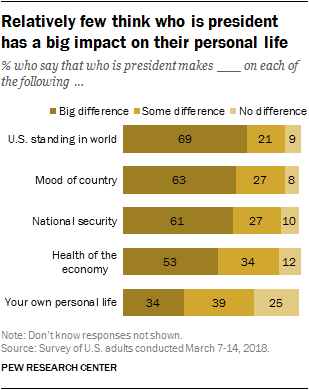 Most Americans say the president has a big impact in areas such as national security and U.S. standing in the world, but relatively few say the occupant of the executive office makes a big difference in their personal lives. 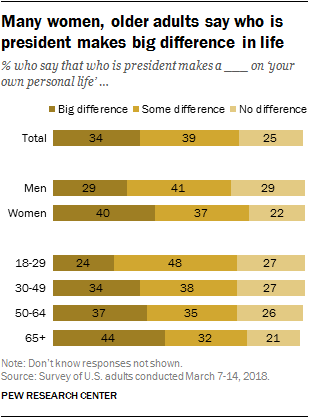 Women are more likely than men to say who is president makes a big difference in their own personal lives. Four-in-ten women say this compared with about three-in-ten men (29%).

Favorability ratings of the Republican and Democratic parties 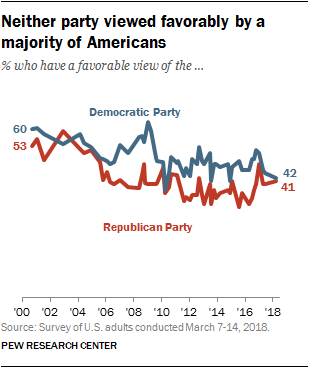 Ratings of the Republican Party are now higher than they were for much of 2015 and 2016, prior to the election of Donald Trump. However, they are down from a recent high of 47% in January 2017, immediately after the election.

By contrast, about two-thirds (65%) of Republican leaners view the GOP favorably. These ratings are down somewhat from a post-election high, but remain far more positive than at most other points over the past several years.

There is no difference between how self-identifying Republicans and Democrats rate their own parties. Overall, 82% of Republicans and the same share of Democrats say they view their respective party favorably.

For the past several decades, members of both parties have expressed predominantly unfavorable views of the opposing party. But the intensity of these attitudes is much higher today than it was 10 or 20 years ago. 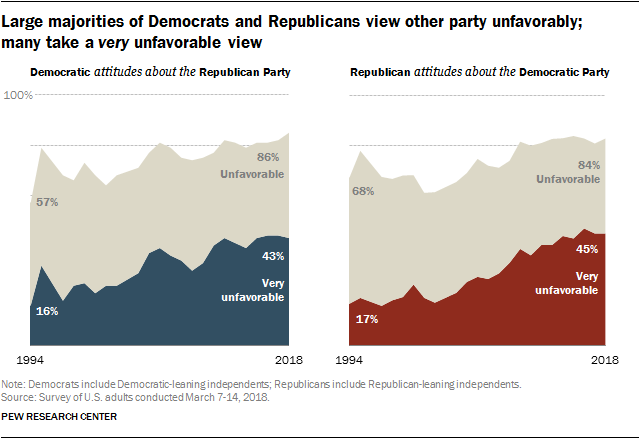 Recent Pew Research Center surveys have found that antipathy toward the other party is a key driver of an individual’s own party identification. Majorities of Republicans and Democrats – as well as Republican and Democratic leaners – cite harm from the opposing party’s policies as a major reason for their own partisan orientation. 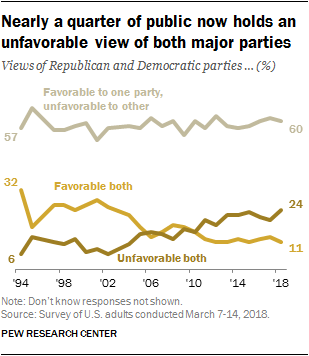 With the public holding relatively dim views of both major political parties, almost a quarter (24%) now have unfavorable views of both the Republican and Democratic parties.

The share with unfavorable views of both parties was just 6% back in 1994; it is now as high as it has ever been in Pew Research Center surveys dating to that year.

Most of those with unfavorable views of both parties identify as independents (63%); Democratic-leaning independents make up a slightly larger share than Republican-leaning independents. A plurality (41%) describe themselves as moderate; 28% are conservative and 28% say they are liberal. Those who have an unfavorable opinion of both major parties also tend to be relatively young (59% are under age 50).

Next: 5. The Electoral College, Congress and representation
← Prev Page
Page3Page4You are reading page5Page6Page7Page8Page9Page10Page11Page12Page13
Next Page →

The Public, the Political System and American Democracy 1. Democracy and government, the U.S. political system, elected officials and governmental institutions 2. Views of American democratic values and principles 3. Elections in the U.S.: Priorities and performance
4. Democracy, the presidency and views of the parties
Public sees risks in granting greater presidential powersMost say the president has large impact on U.S. standing, national moodFavorability ratings of the Republican and Democratic parties
5. The Electoral College, Congress and representation 6. Quality and responsiveness of elected officials 7. Democratic debates and the stakes of politics 8. The tone of political debate, compromise with political opponents 9. The responsibilities of citizenship 10. Political engagement, knowledge and the midterms Methodology Appendix A: Measures and scales