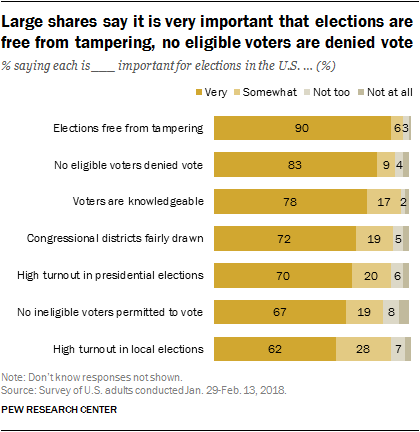 As is the case with overall views of the political system, the public sees a range of objectives as important for U.S. elections. However, assessments of how well these goals are being achieved vary widely – and many evaluations are deeply divided along partisan lines.

Overwhelming majorities of Americans – including most Republicans and Democrats – say it is very important that elections are free from tampering (90% say this) and that no eligible voters are prevented from voting (83%).

Large majorities also say it is very important that voters are knowledgeable about candidates and issues (78%), the way congressional districts are determined is fair and reasonable (72%) and there is high voter turnout in presidential elections (70%).

And two-thirds (67%) say it is very important that no ineligible voters are permitted to vote, while 62% prioritize high turnout in local elections.

Nearly all Americans say each of these items is very or somewhat important. Very few – no more than about 10% in any case – say they are not too important or not at all important. 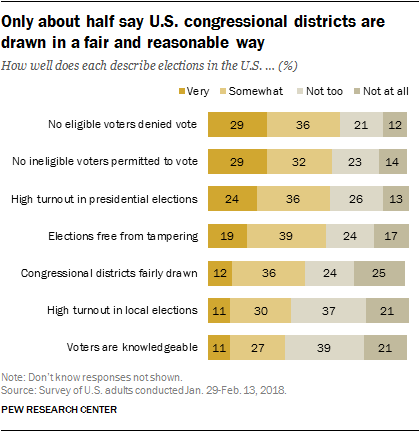 Roughly two-thirds think the statement “no eligible voters are prevented from voting” describes elections in the U.S. very (29%) or somewhat (36%) well; about a third say this describes U.S. elections not too well (21%) or not at all well (12%).

Similarly, about six-in-ten (61%) say “no ineligible voters are permitted to vote” describes elections very (29%) or somewhat (32%) well; 37% say this does not describe U.S. elections well.

And fewer than half say “there is high voter turnout in local elections” (41%) and “voters are knowledgeable about candidates and issues” (39%) describe elections well. 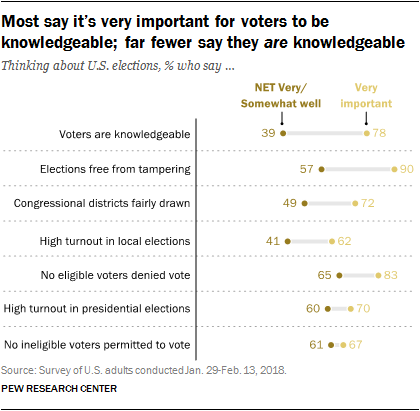 The mismatch between the public’s priorities for elections and its view of reality is most apparent in views of voters being knowledgeable. About three-quarters (78%) rate this as very important, but only half as many (39%) say this describes elections very or somewhat well.

Partisans share goals for elections, with a few exceptions 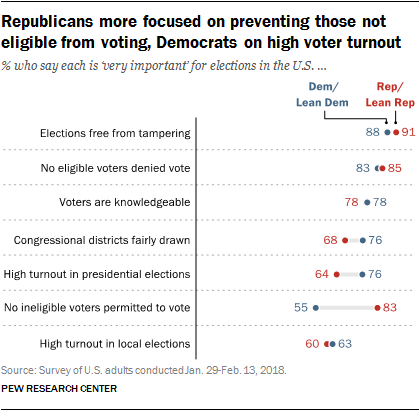 Comparable majorities in both parties also say it’s very important that no eligible voters are prevented from voting (85% of Republicans, 83% of Democrats).

Partisans are deeply divided, however, over the importance of preventing ineligible voters from casting ballots. More than eight-in-ten Republicans (83%) cite this as very important, compared with 55% of Democrats (27% of Democrats say this is somewhat important).

More Democrats (76%) than Republicans (64%) view high turnout in presidential elections as very important, and Democrats are also more likely to prioritize having a fair process for determining congressional districts (76% of Democrats, 68% of Republicans). 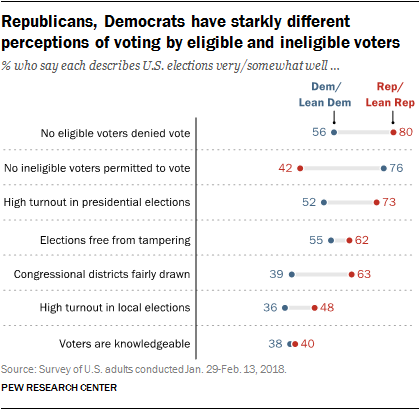 While there is broad agreement over the important aspects of U.S. elections, there are deep divisions when it comes to how they are actually being conducted today.

A large majority of Republicans (80%) say “no eligible voters are prevented from voting” describes U.S. elections very or somewhat well. A much narrower majority of Democrats (56%) agree.

By contrast, when it comes to not allowing any ineligible voters to vote, Democrats are far more likely than Republicans to think the U.S. is doing at least somewhat well. Roughly three-quarters of Democrats and Democratic leaners say this (76%), compared with just 42% of Republicans and Republican leaners.

The divide in views of whether congressional districts are drawn fairly is nearly as wide. A 63% majority of Republicans say fair and reasonable determination of voting districts describes the U.S. at least somewhat well. By contrast, a majority of Democrats (58%) say this does not describe the U.S. well; 39% say it does.

And while nearly three-quarters of Republicans (73%) say “there is high voter turnout in presidential elections” describes elections well, only about half of Democrats (52%) view turnout as “high.” More Republicans also say turnout in local elections is high (48% vs. 36%). 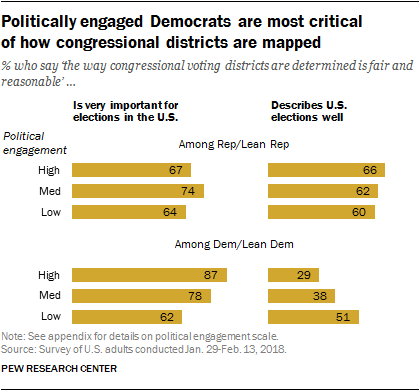 Politically engaged Democrats attach a great deal of importance to the issue of fairly drawn congressional districts. And they are decidedly skeptical about whether this goal is being achieved.

Nearly nine-in-ten Democrats who are highly politically engaged (87%) say it is very important that the way congressional districts are determined is fair and reasonable. Smaller shares of less engaged Democrats – and Republicans of differing levels of political engagement – say this is very important.

And just 29% of the most politically engaged Democrats give positive evaluations of whether districts are being determined fairly and reasonably. Larger shares of less politically engaged Democrats – including 51% of the least engaged – say this describes U.S. elections well. Among Republicans, majorities across all levels of political engagement say districts are being fairly determined. 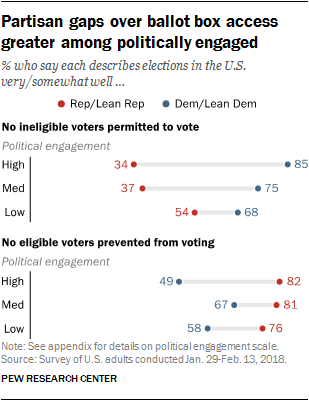 In considering whether no ineligible voters are permitted to vote, Republicans and Republican leaners with high levels of engagement are most skeptical: Just about a third (34%) say the U.S. is doing at least somewhat well. By contrast, Republicans with low levels of political engagement are much more positive: A slim majority (54%) thinks this describes the U.S. at least somewhat well.

Among Democrats, the highly engaged overwhelmingly think the U.S. does at least somewhat well in this area (85%), and the partisan gap stands at 51 percentage points. A smaller majority of low-engagement Democrats (68%) think this describes the U.S. well; the gap among those with low levels of engagement is just 15 points.

Next: 4. Democracy, the presidency and views of the parties
← Prev Page
Page3You are reading page4Page5Page6Page7Page8Page9Page10Page11Page12Page13
Next Page →

The Public, the Political System and American Democracy 1. Democracy and government, the U.S. political system, elected officials and governmental institutions 2. Views of American democratic values and principles
3. Elections in the U.S.: Priorities and performance
Partisans share goals for elections, with a few exceptionsPolitically engaged Democrats highly critical of process for determining congressional districts
4. Democracy, the presidency and views of the parties 5. The Electoral College, Congress and representation 6. Quality and responsiveness of elected officials 7. Democratic debates and the stakes of politics 8. The tone of political debate, compromise with political opponents 9. The responsibilities of citizenship 10. Political engagement, knowledge and the midterms Methodology Appendix A: Measures and scales