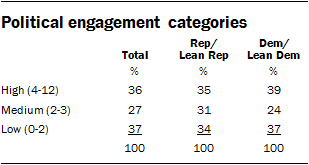 Throughout this report, a three-category measure of political engagement is used. The scale combines how often respondents follow politics, how often they vote and whether they have engaged in any of five political activities in the last five years. The scale is weighted to favor more recent participation (within the last year). The five activities are: attending a political event or rally, volunteering for a political campaign, contacting an elected official, contributing money to a candidate or campaign and attending a government or community meeting. The scale has a range of zero to 12. High engagement individuals score between 4 and 12 on the scale; medium engagement score between 2 and 3 and low engagement score under 2. 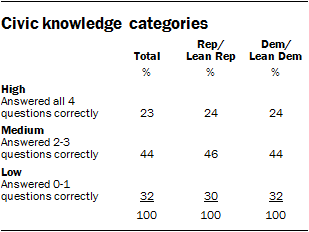 This report uses a three-category measure of civic knowledge. The scale combines four questions about civic knowledge. The questions are who casts tie-breaking votes in the U.S. Senate (Vice President), how many votes are needed to end a filibuster (60), which amendment to the U.S. Constitution determines the number of terms a president can serve (22nd Amendment) and what is the Electoral College (assembly that formally elects the president). Respondents receive one point on the scale for each correct answer, with a maximum score of four.

Researchers obtained data at the congressional district level in updated replication materials for Gary Jacobson’s “It’s Nothing Personal: The Decline of the Incumbency Advantage in U.S. House Elections,” published in the Journal of Politics.

Back to Overview
← Prev Page
Page3Page4Page5Page6Page7Page8Page9Page10Page11Page12You are reading page13
Next Page →

The Public, the Political System and American Democracy 1. Democracy and government, the U.S. political system, elected officials and governmental institutions 2. Views of American democratic values and principles 3. Elections in the U.S.: Priorities and performance 4. Democracy, the presidency and views of the parties 5. The Electoral College, Congress and representation 6. Quality and responsiveness of elected officials 7. Democratic debates and the stakes of politics 8. The tone of political debate, compromise with political opponents 9. The responsibilities of citizenship 10. Political engagement, knowledge and the midterms Methodology
Appendix A: Measures and scales