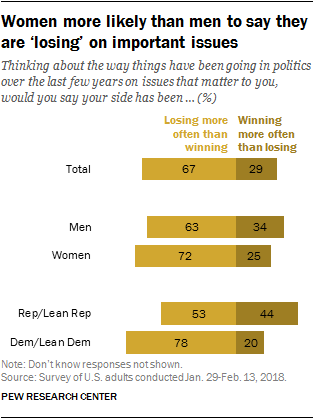 The share of Americans who say they are losing more than winning has increased 8 percentage points since 2016 (from 59% to 67% today).

Partisans’ views also have shifted since before the 2016 election: 78% of Democrats and Democratic leaners now say they are losing more often than winning, up from 49% two years ago. Today, Republicans and Republican leaners are about evenly split (53% say losing more often, 44% say winning). In 2016, 75% of Republicans said they felt they were losing on the issues that mattered to them. 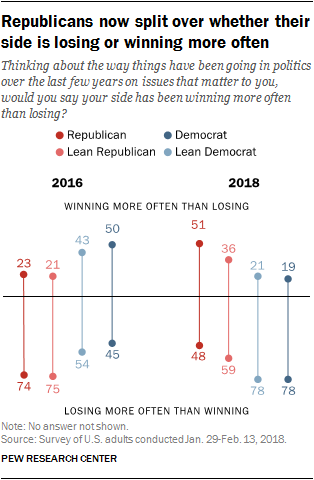 In the current survey, those who identify with the GOP are more likely than those who lean toward the Republican Party to say their side has been winning more often than losing (51% vs. 36%). Two years ago, there were no significant differences in these views.

Among Democrats, equally large majorities of those who identify with the party and those who lean Democratic (78% each) say they are losing more often than winning in politics. In 2016, more Democratic identifiers (50%) than leaners (43%) said their side was winning more often.

Perceptions of the public’s political wisdom and ability

About half of the public (51%) says that ordinary Americans would not do a better job solving the country’s problems than elected officials, compared with slightly fewer (44%) who think they would do a better job. This marks a shift from 2015, when most (55%) said they thought ordinary Americans would do better than elected officials and just 39% said they could not do better.

This shift in views has been especially pronounced among Republicans and Republican leaners. Today, 43% of Republicans think ordinary Americans would do a better job than elected officials, down sharply from 62% who said this in 2015, during Barack Obama’s administration.

There has been little change in views among Democrats and Democratic leaners on this question: About as many are skeptical that ordinary Americans would do better than elected officials today (45%) as said this in 2015 (49%).

Older adults and those without a college degree have also become more skeptical about the public’s ability to do better than elected officials.

The public has become less confident in the ability of ordinary Americans to outperform elected officials, but they have become somewhat more positive when it comes to assessments of the political wisdom of the American people.

Today, 56% say that they have not very much or no confidence at all in the wisdom of the American people when it comes to making political decisions; 42% say they have a very great deal or good deal of confidence. While opinion is negative on balance, it is more positive than it was two years ago: In 2016, nearly two-thirds (64%) said they had not very much or no confidence in the public’s political wisdom.

Republicans and Republican leaners have driven this shift in overall views. In the current survey, 54% say they have a very great or good deal of confidence in the wisdom of the American people when it comes to making political decisions. In the spring of 2016, just 35% said this. By contrast, views among Democrats and Democratic leaners have not changed over the last two years: Just 33% expressed confidence in the public’s political wisdom in 2016 and about the same percentage says this today (32%). 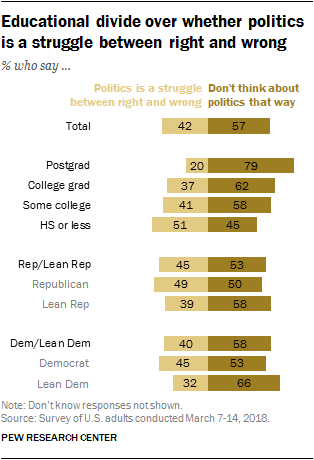 Overall, 42% of Americans say they think about politics as a struggle between right and wrong, while a majority (57%) doesn’t think of politics in that way.

How clear are the solutions to the country’s issues? 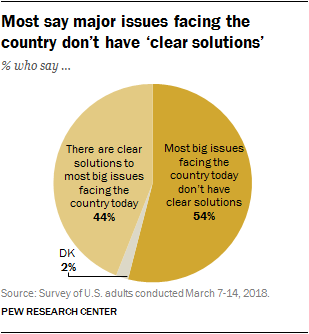 Just over half of Americans see the major issues facing the country today as complicated: 54% say that most big issues don’t have clear solutions, while 44% say the solutions are clear. This sentiment is little changed in the overall public over the past few years, but there have been shifts in how both conservative Republicans and liberal Democrats view the country’s problems. 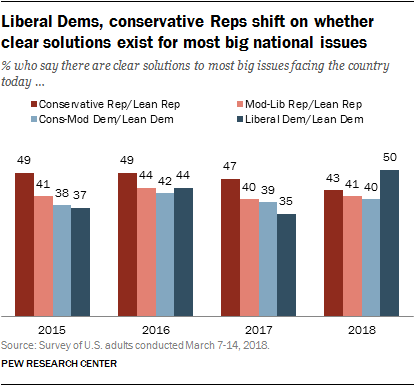 In years past, conservative Republicans and Republican leaners were more likely than either Democrats or moderates and liberals in the GOP coalition to say that there were clear solutions to most of the big issues facing the country. Today, liberal Democrats and Democratic leaners are somewhat more likely than those in other groups to say solutions are clear.

Last year, 47% of conservative Republicans and 35% of liberal Democrats said solutions to most of the country’s big problems were clear.

Today, half (50%) of liberal Democrats say this, compared with 43% of conservative Republicans. Within both parties, views among the less ideological wings of the parties have not shifted over the last three years. 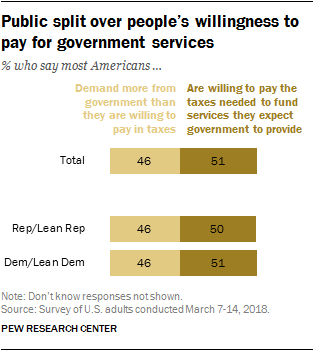 As was the case in 2015, there is no partisan gap on this question. There also are no significant differences in these views across demographic groups today; this represents a change from 2015, when younger, more educated and higher-income people were more likely than others to say the public demanded more than it was willing to pay taxes for.

Nearly eight-in-ten Democrats and Democratic leaners (78%) now say rulings should be based on the Constitution’s current meaning, higher than at any previous point and up 9 percentage points from 2016. Just three-in-ten Republicans (30%) currently say the same; this reflects an 11-point increase from the fall of 2016, but is little different from GOP views in 2010 and 2011. 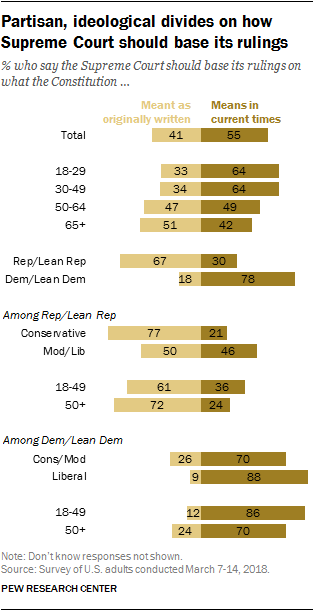 Conservative Republicans continue to overwhelmingly say the Constitution should be interpreted based on its original meaning (77%) rather than its meaning in current times (21%). But moderate and liberal Republicans and Republican leaners are more divided in their views: 50% say original meaning, 46% current times. There is a more modest ideological gap among Democrats, though liberal Democrats are more likely than conservatives and moderates to think the court should base its rulings on current meaning (88% vs. 70%).

There is a substantial age gap in these views: More than six-in-ten Americans younger than 50 (64%) say the high court should take current context into account when interpreting the Constitution. By comparison, only about half of those 50 and older (47%) say the same.

Similarly, while wide majorities of Democrats of all ages say the Supreme Court should base its rulings on its view of the Constitution’s current meaning, older Democrats (70% of those 50 and older) are less likely than younger Democrats (86% of those 18 to 49) to say this.

Next: 8. The tone of political debate, compromise with political opponents
← Prev Page
Page3Page4Page5Page6Page7You are reading page8Page9Page10Page11Page12Page13
Next Page →

The Public, the Political System and American Democracy 1. Democracy and government, the U.S. political system, elected officials and governmental institutions 2. Views of American democratic values and principles 3. Elections in the U.S.: Priorities and performance 4. Democracy, the presidency and views of the parties 5. The Electoral College, Congress and representation 6. Quality and responsiveness of elected officials
7. Democratic debates and the stakes of politics
Perceptions of the public’s political wisdom and abilityMajority of public says politics is not a struggle between right and wrongHow clear are the solutions to the country’s issues?More say constitutional interpretation should address current meaning
8. The tone of political debate, compromise with political opponents 9. The responsibilities of citizenship 10. Political engagement, knowledge and the midterms Methodology Appendix A: Measures and scales