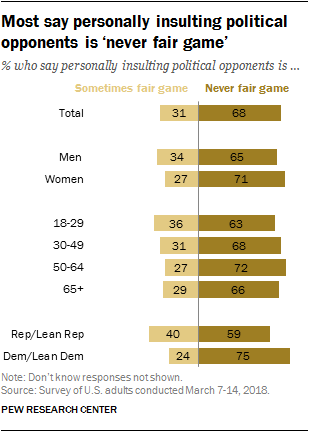 About two-thirds of Americans (68%) say that personally insulting political opponents is never fair game in politics, while 31% say insults are sometimes fair game.

Overall, there is a modest gender gap in these views, with women somewhat more likely than men (71% vs. 65%) to view personal insults as unacceptable. There are no significant differences in these views by age or across racial and ethnic groups.

As in the past, Democrats and Democratic-leaning independents are considerably more likely than Republicans and Republican leaners to say insults are never fair game. Three-quarters of Democrats (75%) now say this, compared with 59% of Republicans.

Current views are on par with those in the spring of 2016, but the share saying insults are not acceptable is higher than it was in the immediate weeks before the 2016 election: In October 2016, a narrower majority of voters (54%) said insulting opponents was never fair game in politics. 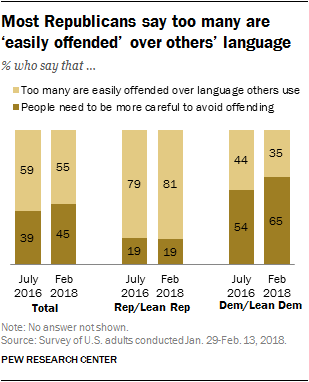 Overall, 55% of Americans currently say that “too many people are easily offended these days over the language that others use,” while 45% say that “people need to be more careful about the language they use to avoid offending people with different backgrounds.”

While roughly eight-in-ten Republicans and Republican-leaning independents (81%) take the position that people are too easily offended by the language others use, about two-thirds of Democrats and Democratic leaners (65%) take the opposing view that people need to be more careful with language to avoid offenses.

Although this partisan divide is not new, it has widened since 2016. Republican attitudes are virtually unchanged over the past two years. But the share of Democrats now holding the view that people need to be more careful with language has increased 11 percentage points (up from 54% two years ago).

While the view that people should be more careful is held by majorities of Democrats in all ideological groups, it is particularly prevalent among liberals. Today, 72% of liberal Democrats and Democratic leaners take this position, compared with 59% of conservatives and moderates in the party. There are no significant differences in the views of Republicans by ideology.

As in 2016, there remain significant gaps in these opinions between men and women and between blacks and whites.

However, the gender gap is concentrated among Democrats. While 72% of Democratic women say people need to be more careful about language to avoid offending others, a more modest majority (57%) of Democratic men say this. There are no significant differences in these views between Republican men and women.

Black people remain significantly more likely than either whites or Hispanics to hold the view that people need to be more careful about language to avoid offending those with different backgrounds. Today, 77% of African Americans say this, compared with 38% of whites and 44% of Hispanics. 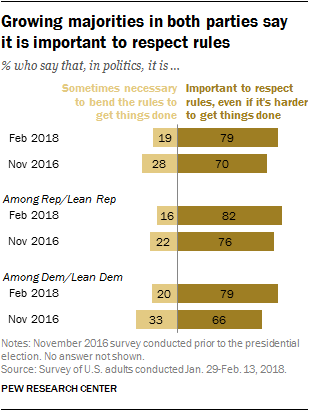 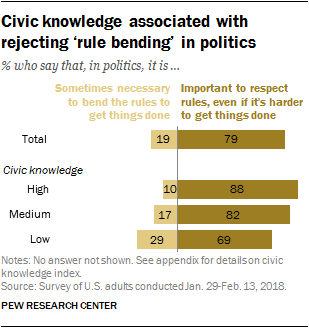 While there are no significant differences in these views across partisan or demographic groups, there are modest differences related to levels of civic knowledge.

Nearly nine-in-ten Americans with high levels of civic knowledge (88%) say it’s important to respect the rules even if that makes it harder to get things done, while just 10% believe that it is sometimes necessary to bend the rules. Among those with relatively low levels of civic knowledge, a narrower – though still substantial – majority (69%) says respect for the rules is important, while about three-in-ten (29%) say that bending the rules is sometimes acceptable in order to get things done. These differences are evident even when controlling for partisanship. 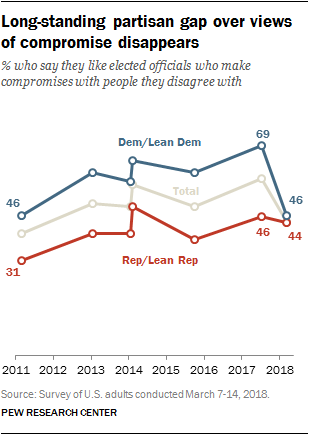 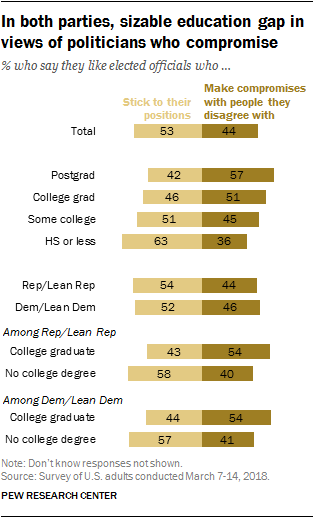 This pattern is seen in both parties, with slight majorities of college graduates saying they prefer politicians who make compromises (54% in both parties) and the balance of opinion reversed among those without college degrees (58% of Republicans and 57% of Democrats without bachelor’s degrees say they prefer elected officials who stick to their positions).

Next: 9. The responsibilities of citizenship
← Prev Page
Page3Page4Page5Page6Page7Page8You are reading page9Page10Page11Page12Page13
Next Page →

The Public, the Political System and American Democracy 1. Democracy and government, the U.S. political system, elected officials and governmental institutions 2. Views of American democratic values and principles 3. Elections in the U.S.: Priorities and performance 4. Democracy, the presidency and views of the parties 5. The Electoral College, Congress and representation 6. Quality and responsiveness of elected officials 7. Democratic debates and the stakes of politics
8. The tone of political debate, compromise with political opponents
Partisan gap on ‘political correctness’ debate grows widerWide majority rejects bending the rules in politicsDemocratic views shift on making compromises in politics
9. The responsibilities of citizenship 10. Political engagement, knowledge and the midterms Methodology Appendix A: Measures and scales