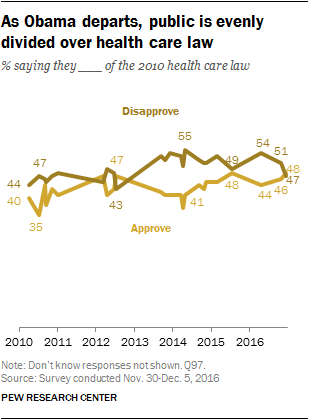 As Barack Obama prepares to leave office, the public is divided over a signature policy of his presidency: The Affordable Care Act. Currently, about as many approve of the 2010 health care law as disapprove (48% vs. 47%). The balance of opinion is somewhat more positive today than in October (when 46% approved and 51% disapproved) or April (44% approved, 54% disapproved).

The last time opinion of the 2010 health care law was evenly split was in July 2015, following the Supreme Court’s ruling that upheld the federal government’s ability to provide insurance subsidies through federal exchanges. At that time, 48% said they approved of the law and 49% said they disapproved. 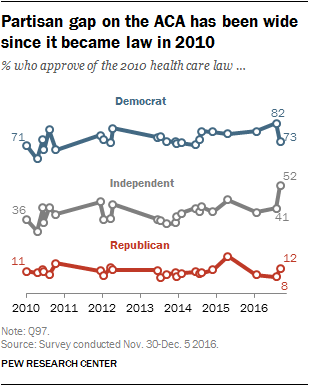 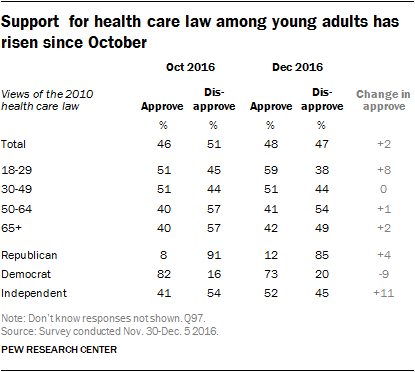 Over the past few months, approval of the health care law has edged higher among young adults.

The future of the ACA 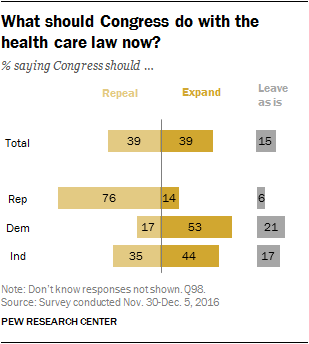 As with overall views of the health care law, the public is divided over whether the law should be repealed, expanded or left as it is. As many want Congress to repeal the law as to expand it (39% each), while 15% favor leaving the law as is.

These views are little changed from October, when 44% favored repealing the law, 40% backed its expansion and 13% said lawmakers should leave it as is.

While Republicans remain overwhelmingly in favor of repealing the law, the share favoring repeal has declined from 85% in October to 76% currently.

Support among Democrats for expanding the law has fallen since shortly before the election. Currently, about half (53%) of Democrats say that Congress should expand the ACA, down from 68% in October. 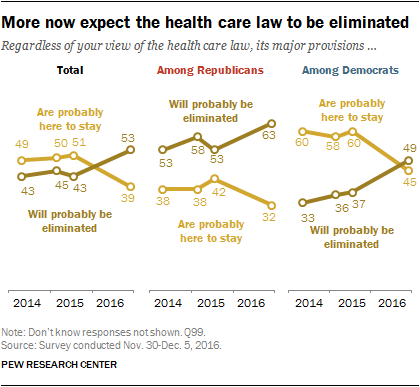 In the wake of the 2016 election, the public has become more skeptical about the ACA’s future. Currently, 53% say its major provisions will probably be eliminated, while 39% say they are probably are “here to stay.”

In surveys conducted in 2014 and 2015, more said the law’s provisions were likely to be preserved than eliminated. In July 2015, 51% said the law was probably here to stay, while 43% said it would probably be eliminated.

Republicans, whose party leaders have pursued efforts to repeal the health care law, are now 10 points more likely than they were in July 2015 to say that the law will probably be eliminated (53% then, 63% now). Just 32% of Republicans now say that major provisions of the law are probably here stay.

Many are unaware of a Republican proposal that would change Medicare into a voucher program in which future participants would be given a credit towards the purchase of private health insurance coverage. 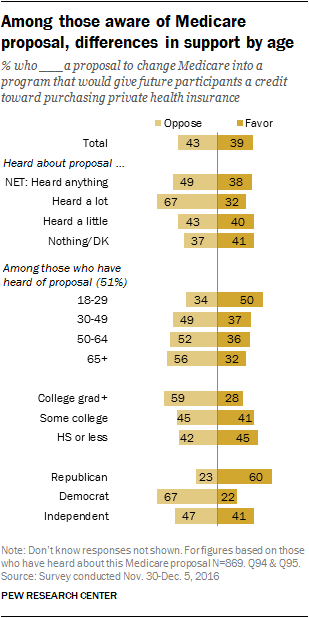 The public is evenly divided between support and opposition towards a proposal to shift Medicare to a voucher style health care coverage program: 43% oppose this change, while 39% favor it and 18% express no opinion either way.

However, the balance of opinion is more negative among the roughly half of adults who have heard about the Medicare proposal: 49% oppose it, while 38% favor it.

Among adults under 30 who have heard of the proposal, more favor (50%) than oppose (34%) it. Among older age groups, there is more opposition than support to the proposed Medicare changes.

Republicans who have heard at least a little about the Medicare proposal favor it by a wide margin (60% to 23%). Two-thirds (67%) of Democrats oppose it, while just 22% favor it.

Republicans who are aware of proposed changes to Medicare are more supportive of the plan than they were in August 2012, when Paul Ryan, the proposal’s primary architect, was named as Mitt Romney’s vice presidential running mate. At that time, 46% of Republicans favored the changes; today, Republican support is 14 percentage points higher (60%). Democrats’ views of the proposal are little changed since 2012.

Medicare voucher proposal more politically divisive than in past 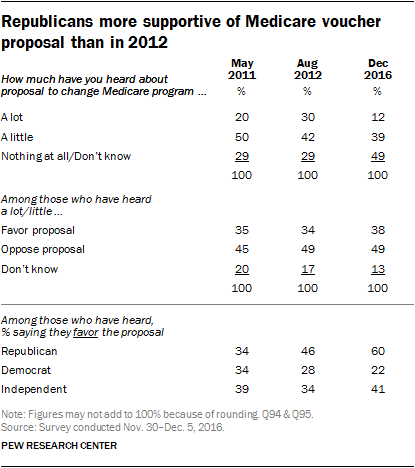 In 2011, when Rep. Paul Ryan (now Speaker Ryan) introduced a Medicare voucher proposal as part of a deficit reduction package, there was little support for the proposal among Republicans or Democrats (34% each).

In the current survey, however, views are far more polarized: 60% of Republicans who are aware of the voucher proposal favor the idea compared with only 22% of Democrats.

Also in 2011, there was evidence that changes like this to Medicare were less popular among older Americans and that these views cut across party lines. Today, that is no longer the case.

A majority of Republicans age 50 and older now favor a Medicare voucher proposal (59%), compared with just 16% of Democrats in this age group.

By contrast, in May 2011, similarly small shares of Republicans age 50 and older and Democrats age 50 and up favored a Medicare voucher idea (31% and 24%, respectively).

For the first time since 2008, more now say economic conditions in the country today are excellent or good (31%) than say conditions are poor (24%); 44% say the economy is only fair.

When it comes to the condition of the economy a year from now, Republicans are more than twice as likely as they were in June to think economic conditions will be better: Fully 75% of Republicans think this now, compared with just 29% in June and 16% one year ago. 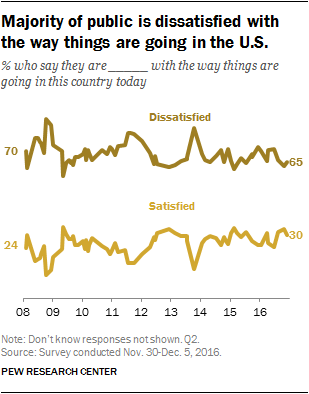 Democrats, by contrast, are increasingly pessimistic about next year’s economic conditions: Just 15% of Democrats think conditions will be better in a year, down from 35% who said this in June. 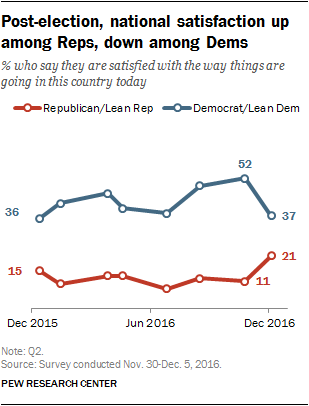 A third of independents (33%) think economic conditions will be better in a year, up 11 points since June.

And while overall national satisfaction is little changed from recent years, there is movement among partisans on this measure.

Overall, a 65% majority of the public is dissatisfied with the way things are going in the country today; 30% are satisfied.

Relatively few Republicans and Republican leaners are satisfied with the way things are going (21%), but this share is up 10 points since October.

Among Democrats and Democratic leaners, national satisfaction has fallen from 52% to 37% over the past two months.

Next: 5. Views of Mike Pence
← Prev Page
Page1Page2Page3Page4You are reading page5Page6Page7Page8
Next Page →

Low Approval of Trump’s Transition but Outlook for His Presidency Improves 1. Views of President-elect Trump and his administration 2. Discrimination and conflicts in U.S. society 3. Political values: Government regulation, environment, immigration, race, views of Islam
4. Views of the ACA, Medicare and the nation’s economy
The future of the ACAViews of proposed Medicare changesMedicare voucher proposal more politically divisive than in pastViews of the national economy, satisfaction with the state of the nation
5. Views of Mike Pence 6. Awareness of election results Methodology