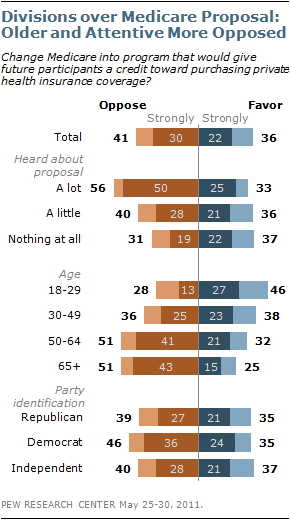 The public offers a mixed reaction to a proposal to change Medicare into a program that would give future participants a credit toward purchasing private health insurance coverage: 41% oppose such a change, 36% favor it, and nearly a quarter (23%) have no opinion either way. Despite this even division of opinion overall, there is broad, and strong, opposition to the proposal among older Americans, and those who are paying a lot of attention to the issue.

Those ages 50 and older oppose this proposal, which is part of Rep. Paul Ryan’s deficit reduction plan, by a 51% to 29% margin. And this opposition is intense: 42% strongly oppose this kind of change, while only 19% strongly favor it. The same is true among people who say they have heard a lot about this proposal – fully 56% are opposed while 33% are in favor, and strong opposition among this group outweighs strong support by two-to-one (50% vs. 25%).

The latest national poll by the Pew Research Center for the People & the Press, conducted May 25-30 among 1,509 adults, finds only modest partisan differences in views of the Medicare proposal. Democrats are slightly more likely to oppose this kind of change than are Republicans (46% vs. 39%), while an identical 35% in both parties are in favor. The ambivalence toward this proposal among Republicans holds across ideological lines. Even among conservative Republicans as many oppose (38%) as favor (34%) this proposal. And among people who say they agree with the Tea Party just 44% support this change, while 36% are opposed.

When it comes to dealing with Medicare, the Democrats have a 44% to 34% edge over the Republicans as the party who can do the best job. Even though this proposed change receives mixed reactions within each party base, most remain loyal to their party on the issue generally. For example, while just 35% of Republicans favor this particular proposal, 70% believe the GOP can do the better job of dealing with Medicare overall. A comparable 75% of Democrats say their party is best suited to handle Medicare, far higher than the 46% who oppose this particular issue. Independents are divided in their assessment, with 40% preferring the Democratic Party, and 33% the Republican Party, on the issue of Medicare. 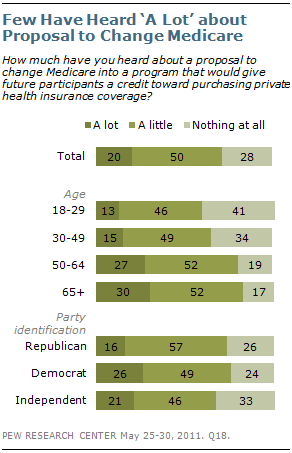 Attention to the debate over Medicare is limited so far. Just one-in-five Americans (20%) say they have heard a lot about a proposal to change Medicare into a program that would give future participants a credit toward purchasing private health insurance coverage; half (50%) have heard a little about it, and 28% have heard nothing at all. Awareness is particularly low among younger Americans – fully 41% of adults under 30, and 34% of those ages 30-49, have heard nothing at all about this proposal. And politically, Democrats are more likely than Republicans to say they have heard a lot about this proposal (26% vs. 16%).

The lack of awareness goes a long way toward explaining some of the contradictory views many Americans hold on this issue. In particular, people under age 30 are the only major demographic group in which significantly more say they favor (46%) than oppose (28%) this proposed change. Yet this same cohort is far more likely to say the Democratic Party (49%) not the Republican Party (34%) can do a better job on this issue.

Opposition to Ryan Medicare Plan from Older, Attentive Americans
Overview
About The Survey