In the wake of Trump’s victory, most Americans are able to correctly identify which candidate won the most Electoral College votes, most individual votes nationwide and the most votes in the state they live in. 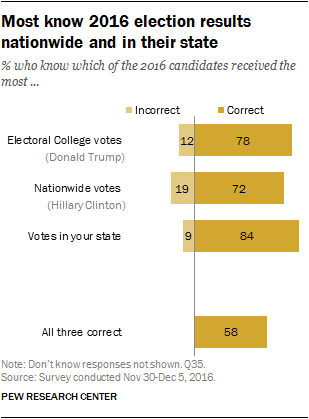 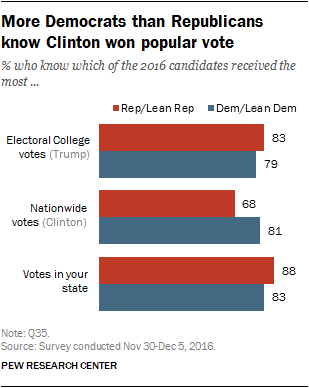 There is a significant partisan divide in knowledge of which candidate won the popular vote. About eight-in-ten Democrats and Democratic leaners (81%) say that Clinton won the most votes nationwide, compared with a smaller 68%-majority of Republicans and Republican leaners.

There is not much of a knowledge gap when it comes to the Electoral College vote and the vote count in a respondents’ home state. 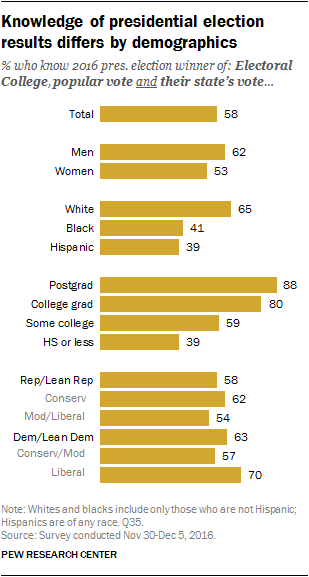 There are significant demographic differences in the share who answer all three of the election results questions correctly.

Men (62%) are more likely than women (53%) to know which candidate received the most votes nationwide (Clinton), the most Electoral College votes (Trump) and which candidate won their state.

There are wide differences in election knowledge by levels of education. Nearly nine-in-ten postgraduates (88%) answer all three questions correctly, compared with 80% of college graduates, 59% of those with some college experience and 39% of those with no more than a high school diploma.

About as many Democrats and Democratic leaners (63%) as Republicans and Republican leaners (58%) get all three election results questions rights. Within both parties there are divides by ideology. Among Democrats, 70% of liberals answer all three questions correctly compared with 57% of those who describe themselves as moderate or conservative. Among Republicans, 62% of conservatives know which candidate won the most Electoral College votes, the popular vote and their home state, compared with 54% of moderate and liberal Republicans.