As has been the case since 2002, Republicans also have a sizable advantage over Democrats on the issue of terrorism. In the current survey, 46% say the Republican Party could do a better job dealing with the terrorist threat at home, while 37% say the Democratic Party could do the better job. 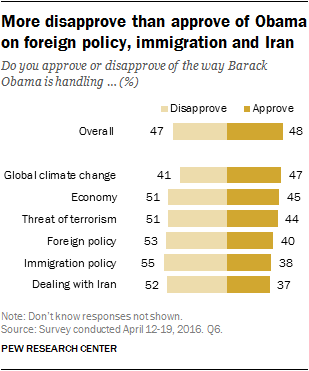 About as many approve of the job Barack Obama is doing as president (48%) as disapprove (47%). Last month, 51% said they approved of the president’s performance and 44% disapproved.

More disapprove of Obama’s handling of the nation’s foreign policy than approve (53% vs. 40%). Similar shares say they disapprove of the president’s job dealing with the threat of terrorism (51%), and Iran (52%).

On balance, evaluations of Obama’s performance on the issue of global climate change are somewhat more positive: 47% say they approve of the president’s handling this issue, while 41% disapprove. 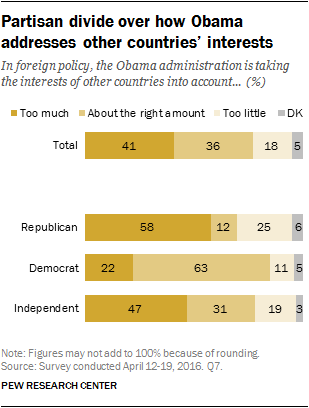 Nearly six-in-ten Republicans (58%) think the Obama administration takes into account the interests of other countries too much, while 25% say it pays too little attention to other countries’ interests; just 12% say it strikes the right balance.

Next: 8. Perceptions of U.S. global power and respect
← Prev Page
Page1Page2Page3Page4Page5Page6Page7You are reading page8Page9Page10
Next Page →