The public continues to view the U.S. as less powerful globally – and less respected by other nations – than it was in the past. But Americans also say the United States is the world’s leading economic and military power. 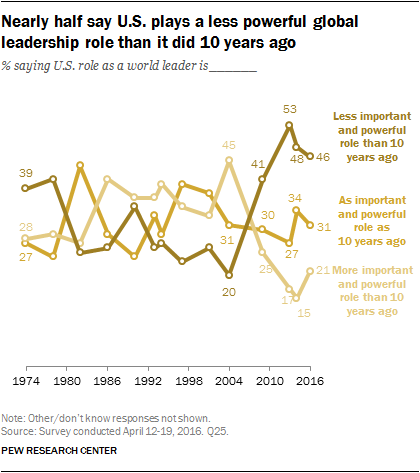 A majority of the public (61%) also says the U.S. is less respected by other countries, although this is lower than the share that said this in 2013 (70%).

Views of U.S. power and importance 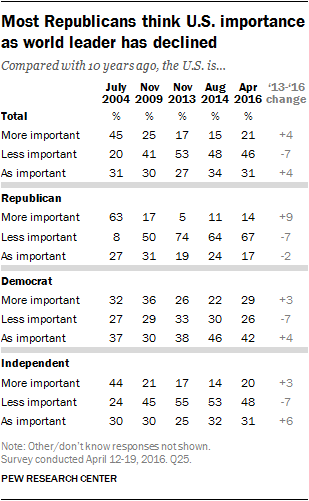 Opinions about U.S. global power have long been divided along partisan lines. In 2004, during George W. Bush’s administration, 63% of Republicans said the U.S. was more important and powerful as a world leader than it had been 10 years earlier, while just 8% said it was less important (27% said the U.S. was about as powerful).

Independents’ views tend to be similar to the public’s overall. In the current survey, 48% say the U.S. is less important than it was 10 years ago, 20% say it is more important and 31% say it is about the same.

Views of global respect for the U.S. 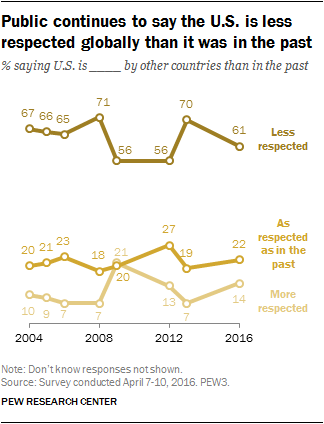 As has been the case since the Bush administration, most Americans (61%) say the United States is less respected by other countries than it was in the past. Just 14% say it is more respected, while 22% say it is about as respected. Nonetheless, the share who says the U.S. is less respected has declined from 70% in 2013. 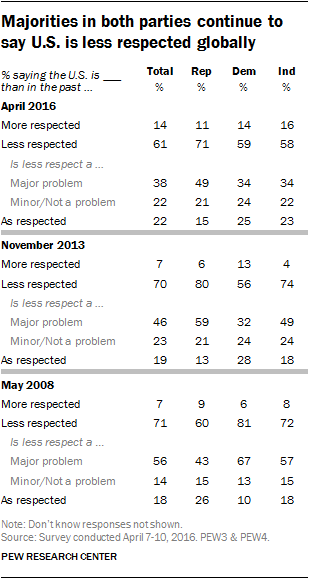 Although majorities of all partisan groups currently say the U.S. is less respected globally than it was in the past, Republicans (71%) are more likely than Democrats (59%) and independents (58%) to say this. Both Republicans’ and independents’ views have become less downbeat about America’s image since 2013.

In 2008, during the Bush administration, majorities of all partisan groups also said the U.S. was less respected internationally than it had been in the past. At that time, however, a larger share of Democrats (81%) than independents (72%) and Republicans (60%) said this.

In annual surveys dating back to 2008, this is the first time that more than half of Americans have said the U.S. is the world’s leading economic power. This share is up eight percentage points since June of 2015 (from 46% then to 54% now).