The Islamic militant group known as ISIS remains the American public’s top international concern. Overall, 80% say ISIS is a major threat to the well-being of the United States, while 16% say it is a minor threat and 3% say it is not a threat; views are little changed from December. 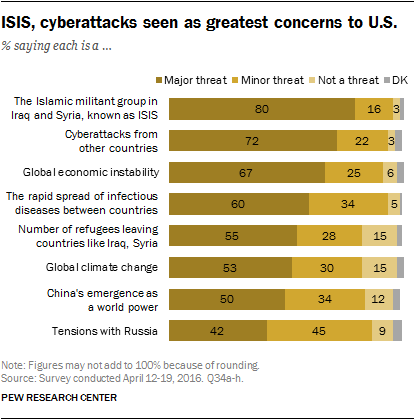 Cyberattacks from other countries rank second on the public’s list of global threats: 72% say they are a major threat, while about two-thirds (67%) view global economic instability as a major threat.

Six-in-ten Americans (60%) view the rapid spread of infectious diseases from country to country as a major threat, up somewhat from 52% in August 2014 (in the midst of the Ebola crisis). 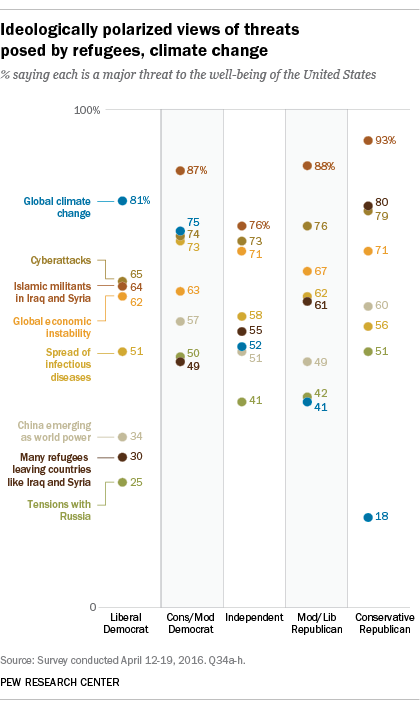 There continue to be wide partisan and ideological differences in views of the top global concerns for the U.S. Overall, Democrats – particularly liberal Democrats – are less likely than Republicans to see many of these issues as a major threat to the country’s well-being. Climate change is the only one of these issues that is seen as a major threat by a greater share of Democrats than Republicans.

Liberal Democrats are also the least likely to view China’s emergence as a world power, tensions with Russia and global economic instability as major threats to the U.S. There are more-modest partisan and ideological differences in perceptions of the threat of cyberattacks from other countries, global economic instability or the rapid spread of infectious diseases from country to country. 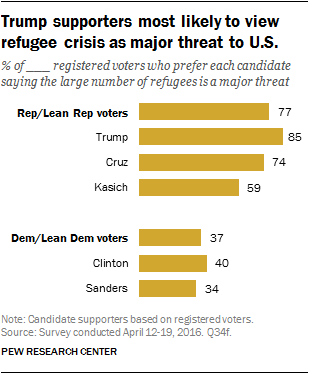 Though a majority of Republican and Republican-leaning registered voters view the large number of refugees leaving countries as a major threat to the nation, this view is more widespread among those who prefer Donald Trump in the contest for the GOP nomination. Fully 85% of Trump supporters say the large number of these refugees is a major threat. That compares with 74% of those who back Cruz and 59% of Kasich supporters.

China and Russia seen as problems, but few say they are U.S. adversaries

There is no sign of growing public concern about either China or Russia. Roughly a quarter of the public (23%) views each as an adversary, while 44% say each is a serious problem but not an adversary. About three-in-ten say neither China nor Russia pose much of a problem for the U.S. 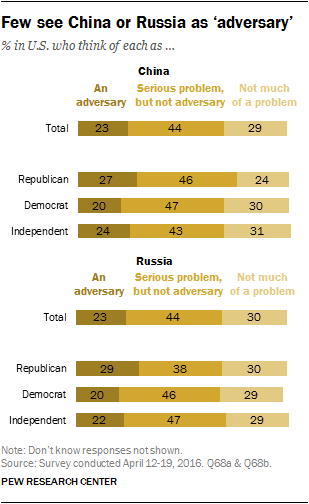 Over the past two years, there has been no rise in the share of the public that sees Russia as an adversary. More now say Russia is not much of a problem than did so in 2014, shortly after the country’s annexation of Ukraine’s Crimea region (30% today, 15% then).

Views of China are little changed over the last several years.

There are minor partisan differences in views for both countries. Though only about a quarter of Republicans (27%) say China is an adversary, they are somewhat more likely than Democrats (20%) to say this.

Similarly, while 29% of Republicans view Russia as an adversary, 20% of Democrats and 22% of independents say the same. 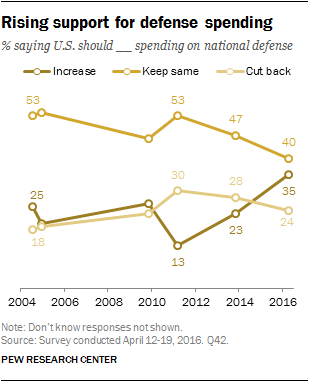 For the first time in more than a decade a greater share of Americans say spending on national defense should be increased (35%) than say it should be cut back (24%). A plurality (40%) say that spending should be kept roughly the same.

In November 2013, the last time this question was asked, more Americans said we should reduce our spending than increase it (28% cut back vs. 23% increase). 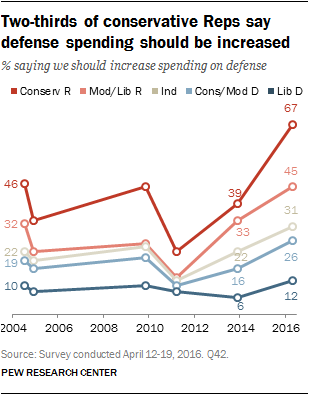 Support for increasing defense spending is particularly pronounced among Republicans – especially conservative Republicans. Today, two-thirds of conservative Republicans (67%) favor increasing the defense budget, up 28 percentage points from when the question was last asked. The share of other partisan groups saying defense spending should increase has also risen, although somewhat more modestly.

There are wide partisan and ideological differences when it comes to national defense spending. Though most conservative Republicans (67%) think defense spending should be increased, moderate and liberal Republicans are more divided: 45% say the national defense budget should increase, 39% say it should stay the same, and 14% think it should be reduced.

Only 20% of Democrats say there should be more spending on defense; 30% say the defense budget should be cut back, while roughly half (49%) say it should remain near current levels.

Among Republican and Republican-leaning registered voters, those who support Donald Trump (66%) and Ted Cruz (64%) in the primary contest are somewhat more supportive of increasing the defense budget than are backers of John Kasich (52%).