Is being part of a global economy good or bad for the U.S.? 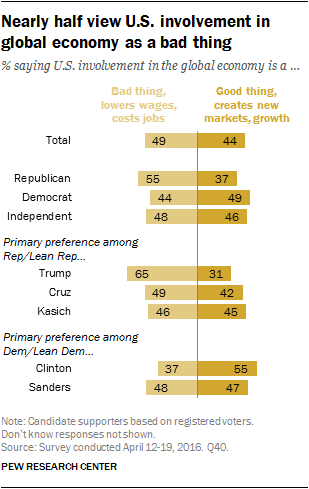 Roughly half of the public (49%) say global economic engagement is “a bad thing because it lowers wages and costs jobs in the U.S.” Slightly fewer (44%) view it as “a good thing because it provides the U.S. with new markets and opportunities for growth.”

Within both parties, views among registered voters vary considerably by primary preferences. Republican and Republican-leaning voters who back Donald Trump are the most skeptical of U.S. involvement in the global economy: By a roughly two-to-one margin (65% to 31%) more say it is a bad thing. By contrast, only around half of those who prefer Cruz (49%) or Kasich (46%) say global engagement is a bad thing.

On the Democratic side, a majority of Clinton supporters (55%) view U.S. global economic involvement as a good thing while fewer (37%) say it is a bad thing. Roughly equal shares of Sanders supporters say it is good for the U.S. to be involved globally (47%) as say it is bad (48%). 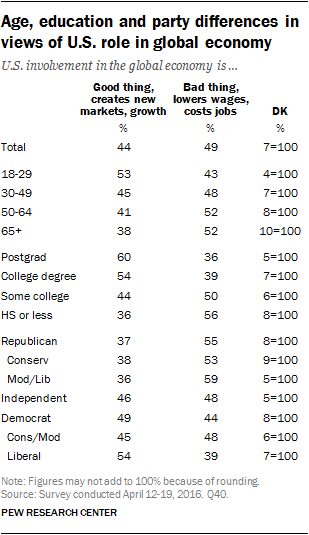 More-highly educated Americans are more likely to view global economic engagement positively. Majorities of those with a postgraduate degree (60%) and a college degree (54%) say that, on balance, U.S. global engagement is a good thing. Only 36% of those with no more than a high school degree and 44% of those with some college experience say the same.

How to deal with developing countries 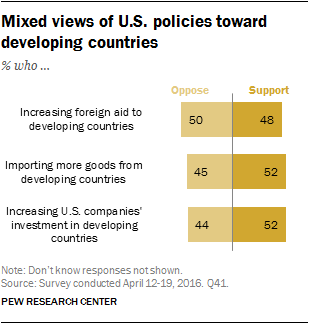 Opinion is divided over whether the U.S. should increase foreign aid to developing countries. Half of the country (50%) is opposed while a roughly equal share (48%) would support increasing foreign aid.

Views on these items vary widely by age and education level. About six-in-ten of those under 30 express support for all three of these issues, while no more than four-in-ten of those 65 and older say the same. 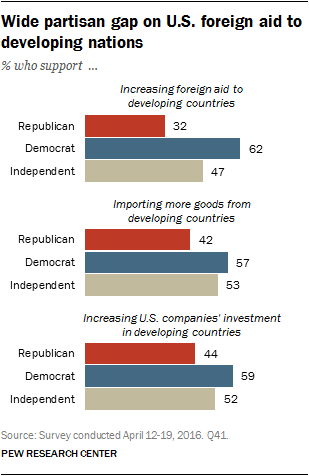 More-highly educated adults also tend to be more supportive of increased engagement with developing nations than those with less education.

There are wide partisan differences in views of how the U.S. should deal with developing countries. On all three issues, Republicans express far less support than Democrats, while independents fall in the middle.

Roughly four-in-ten Republicans say they would support importing more goods from developing nations (42%) and increasing investment from U.S. companies (44%). Fewer say they would be in favor of increasing foreign aid (32%).

About six-in-ten Democrats and around half of independents say they would be in favor of each of these policies.

On all three questions, Trump supporters are more likely than backers of Cruz or Kasich to oppose engagement with developing nations. Nearly eight-in-ten Trump supporters oppose increasing foreign aid to developing nations (78%); two-thirds are against importing more goods from these nations (67%); and about six-in ten disapprove of increasing U.S. companies’ investment abroad (63%).

On the Democratic side, there are no significant differences between the views of Clinton and Sanders supporters on these issues. 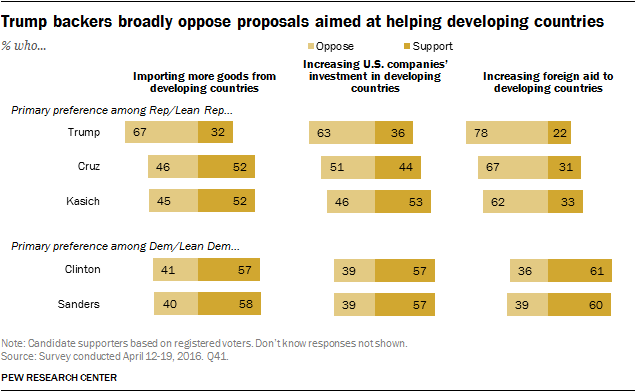