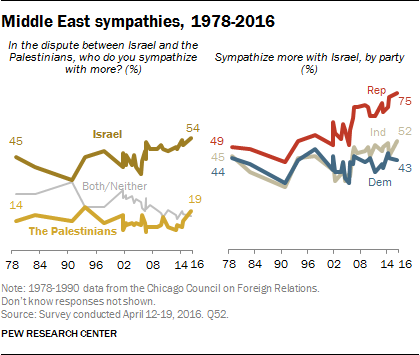 While independents are more likely to express sympathy toward Israel by a 52% to 19% margin, there is a large difference between those who lean toward the Democratic Party and those who lean toward the GOP. Republican leaners sympathize more with Israel by an overwhelming margin (72% vs.9%), in line with the views of Republican identifiers. The sympathies of Democratic leaners, however, are divided: 34% say they sympathize more with Israel and 33% say the Palestinians, while another third either volunteer that they sympathize with both (3%) or neither (16%), or do not offer an opinion (13%). Democratic leaners are less likely than Democratic identifiers to sympathize with Israel. 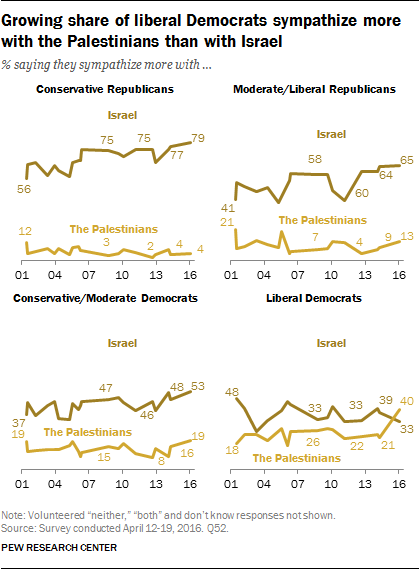 Over the past decade, the share of Americans saying they sympathize more with Israel has grown among most ideological groups – with the exception of liberal Democrats.

Both moderate and liberal Republicans and conservatives in the party have become more sympathetic to Israel over the last 10 years. 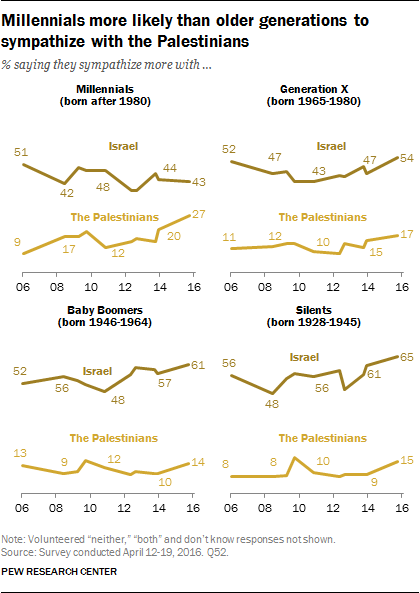 There also are generational differences in sympathies in the Israeli-Palestinian conflict. Older generations tend to be more sympathetic toward Israel than younger generations.

Among older generations, the balance of opinion is little changed over the course of the decade. Baby Boomers and those in the Silent generation sympathize more with Israel by about four-to-one. Generation Xers are somewhat less sympathetic toward Israel than older generations; still, by roughly three-to-one (54% vs. 17%), they say they sympathize more with Israel than the Palestinians.

Can Israel and an independent Palestinian state peacefully coexist?

By a 50% to 42% margin, more Americans say that there is a way for Israel and an independent Palestinian state to coexist peacefully than say that there is not. More now say a two-state solution is possible than said this in August 2014 (43%) shortly after the end of weeks of hostilities between Israel and Hamas.

There also are partisan differences on this issue. Conservative Republicans are the most doubtful about the viability of an independent Palestinian state peacefully coexisting with Israel; 60% say it is not possible to find such a solution. On the other end of the ideological spectrum, two-thirds of liberal Democrats (67%) say a peaceful two-state solution is possible. 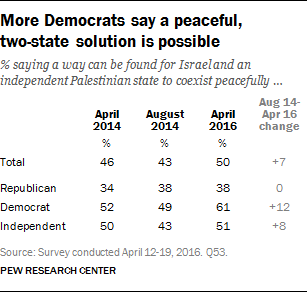 Democrats, in particular, are more likely now to say that a way can be found for two states to coexist than they were two years ago: Today 61% say there is a way for an independent Palestinian state to coexist peacefully with Israel, up from 49% in August 2014.

But Republican views are little changed from two years ago: 38% now say Israel and an independent Palestinian state could peacefully coexist, identical to the share saying this in 2014.

Next: 6. NATO, U.S. allies, the EU and UN
← Prev Page
Page1Page2Page3Page4Page5You are reading page6Page7Page8Page9Page10
Next Page →