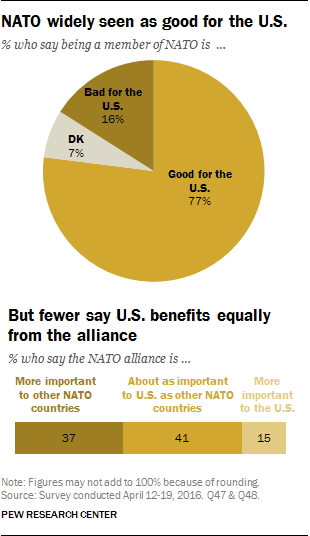 By large margins, the American public has positive views of NATO, the North Atlantic Treaty Organization. Fully 77% say being a member is good for the U.S., and by about a two-to one-margin, more say they have a favorable view of NATO than an unfavorable one (53% vs. 25%). Yet the U.S. public is about equally likely to say the alliance is more important to its non-U.S. members (37%) as to say it is about as important to the U.S. as it is to other member nations (41%). Few (15%) consider the NATO alliance to be of more import to the U.S. than it is to other member countries.

Though U.S. allies are largely viewed positively, a sizeable minority of the public expresses some reserve over the broader question of how much allies’ interests should be taken into account in U.S. foreign policy: While roughly half (51%) say the U.S. should take into account the interests of its allies even if it means making compromises with them, a sizeable minority (42%) says the U.S. should follow its own interests, even when allies strongly disagree.

Views of the United Nations and the European Union remain substantially more positive than negative. And Americans continue to say the country’s ties to European nations are more important to the U.S. than ties to Asian nations (52% to 32%).

Most say NATO benefits the U.S. 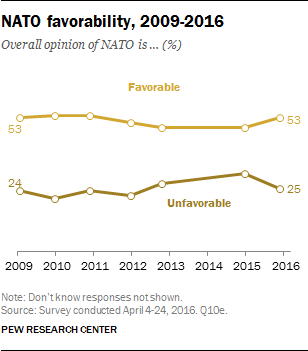 About three-quarters of Americans (77%) say that, on balance, being a member of NATO is a good thing for the U.S. Just 16% say it is bad for the country. 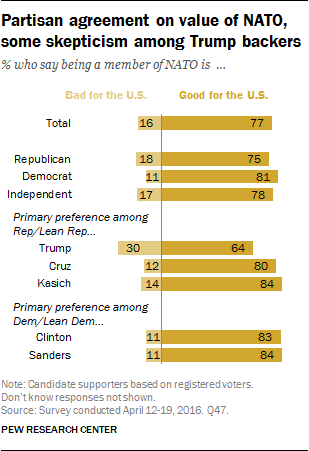 Overall impressions of NATO are little changed in recent years: About half (53%) have a favorable opinion of NATO, while a quarter (25%) hold an unfavorable view of the alliance (21% do not offer an opinion). There are no significant partisan differences in ratings of NATO.

There also is broad partisan agreement that the NATO alliance is good for the U.S.: Three-quarters or more of Republicans (75%), Democrats (81%) and independents (78%) say the country’s membership in NATO is a good thing.

But supporters of Donald Trump in the GOP primary contest are more likely than other GOP voters to express skepticism about NATO’s benefits to the U.S. Nearly two-thirds (64%) of Republican and Republican-leaning voters who back Trump say being a member of NATO is good for the U.S., compared with 80% of Cruz and 84% of Kasich supporters. 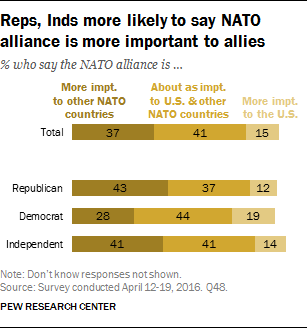 Wide ideological divide over whether to compromise with allies

The public is divided along age and ideological lines when it comes to opinions on cooperating with allies. Overall, 51% say the U.S. should take into account allies’ interests even if it means making compromises, while 42% say the United States should follow its national interests even when the allies strongly disagree.

Roughly half of Republicans (52%), including nearly identical shares of the party’s conservatives and moderates and liberals, say the U.S. should pursue its own interests even if allies strongly object. Democrats are more divided along ideological lines: 45% of conservative and moderate Democrats say the U.S. should follow its national interests even if the allies disagree, but just 20% of liberal Democrats share this view.

There also are educational differences in these attitudes. A majority of those with at least a college degree (63%) say the U.S. should heed allies’ interests even if it means making compromises. Among those with less education, opinion is more evenly divided.

Views of the United Nations and the European Union 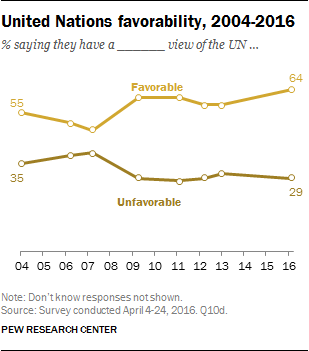 Opinions of the UN have grown slightly more positive since 2013, the last time this question was asked, when 58% expressed a positive view. 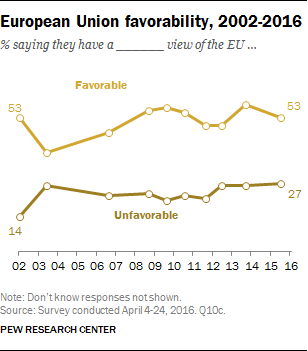 There are wide partisan differences in views of both institutions. Large majorities of Democrats hold a positive view of the UN (80%) and the EU (64%). By contrast, only about four-in-ten Republicans (43%) report having a favorable opinion of either institution. Two-thirds of independents (64%) have a favorable view of the UN, and 54% say the same of the EU.

Are ties to European nations or to Asian nations more important? 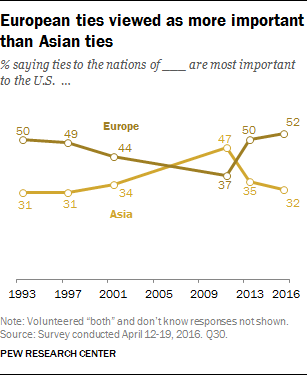 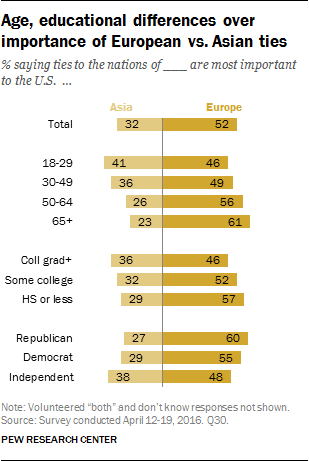 Next: 7. Foreign policy, the parties and Obama
← Prev Page
Page1Page2Page3Page4Page5Page6You are reading page7Page8Page9Page10
Next Page →