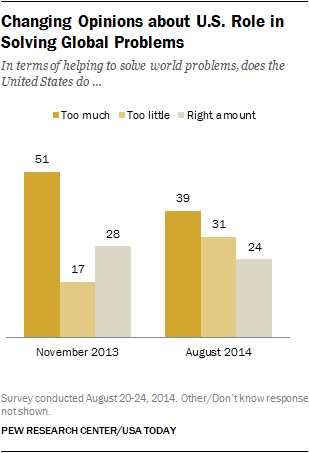 A large majority of Americans think the world is a more dangerous place than it was several years ago. And a terrorist group that was not even on the public’s radar a year ago – the Islamic militants known as ISIS or ISIL – today ranks near the top of its list of U.S. security threats.

As the public’s views of global threats have changed, so too have opinions about America’s role in solving world problems. On balance, more continue to think the United States does too much, rather than too little, to help solve world problems. But the share saying the U.S. does too little to address global problems has nearly doubled – from 17% to 31% – since last November, while the percentage saying it is doing too much has fallen from 51% to 39%.

The new national survey by the Pew Research Center and USA TODAY, conducted August 20-24 among 1,501 adults, finds that 65% say the world is more dangerous than it was several years ago; just 7% say the world has gotten safer while 27% say things have not changed much.

Public perceptions of the global threats confronting the United States have changed since the Pew Research Center released its major study of foreign policy attitudes – America’s Place in the World – in December 2013. Currently, 71% view “Islamic extremist groups like al Qaeda” as a major threat to U.S. well-being, about the same as last year. But nearly as many (67%) say “the Islamic militant group in Iraq and Syria known as ISIS,” represents a major threat. 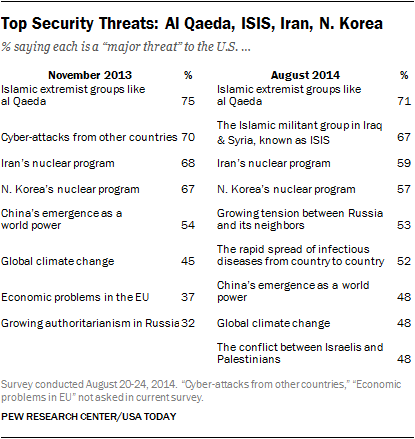 Other ongoing international crises also draw public concern. About half (53%) regard growing tension between Russia and its neighbors as a major threat to the U.S. Last fall, when asked about growing authoritarianism in Russia, just 32% viewed that as a major threat.

As the death toll from the spread of the Ebola virus in West Africa grows, 52% say the rapid spread of infectious diseases is major threat to the U.S.; that is about the same percentage that views tensions between Russia and its neighbors as a major threat.

Meanwhile, the public expresses less concern about some long-standing foreign policy issues. The percentage rating Iran’s nuclear program as major threat has fallen by nine points since last November (from 68% to 59%), while the share saying North Korea’s nuclear program is a substantial threat has declined by 10 points (from 67% to 57%). And somewhat fewer think that China’s emergence as a world power poses a major threat to the U.S. than did so last year (54% then, 48%

Public views of U.S. global power continue to be close to a four-decade low, though these opinions also have changed modestly since last fall. 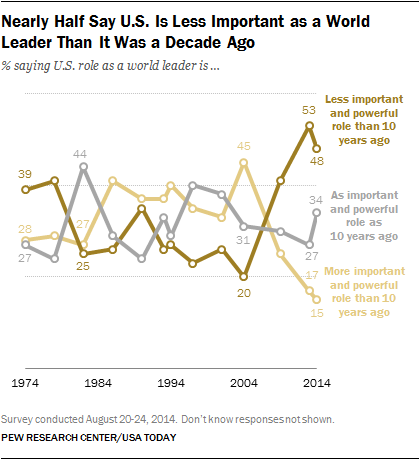 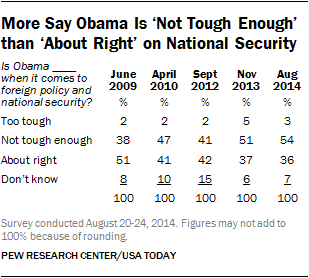 While these opinions are largely unchanged since last fall, in Sept. 2012, during the presidential campaign, just 41% said Obama was not tough enough in foreign policy and national 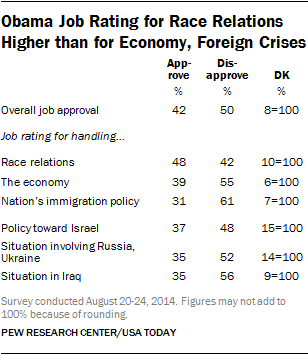 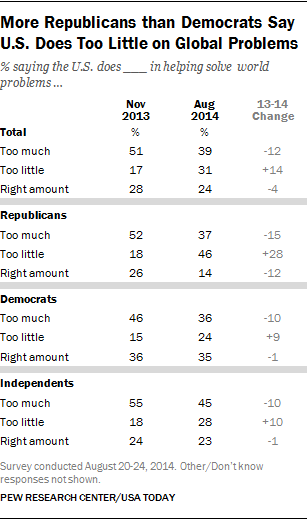 Since last fall, there have been declines in the percentages of Republicans, Democrats and independents who think the U.S. does too much in the world, while increasing shares of all three groups say it does too little. But the biggest shift in opinion has come among

Tea Party Republicans’ views of the U.S. role in solving world problems have changed dramatically since last November. Today, 54% of Republicans and GOP leaners who agree with the Tea Party say it does too little to help solve world problems; just 33% say it does too much. Last year, opinions were nearly the reverse: 54% of Tea Party Republicans said the U.S. did too much global problem-solving while 22% said it did too little. 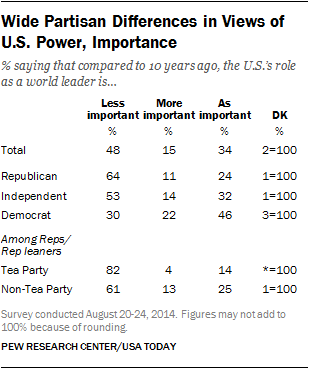 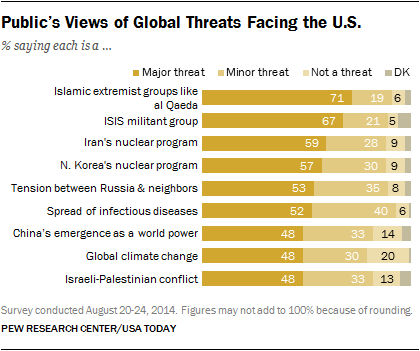 Following the beheading of American journalist James Foley, two-thirds of the public (67%) cite ISIS as a major threat to the U.S. About two-in-ten (21%) name the Islamic militant group in Iraq and Syria as a “minor threat” and just 5% say it is not a threat.

Half of the sample was asked about ISIS and the other half was asked about the broader threat of “Islamic extremist groups like al Qaeda,” which registered similar concern (71% major threat, 19% minor threat, 6% not a threat).

In light of the Ebola outbreak in West Africa, roughly half (52%) believe the spread of infectious diseases between countries is a major threat and four-in-ten (40%) label it a minor threat. However, the public shows less concern today about the international spread of diseases than it did in May 2001: About two-thirds (66%) then said it was a major threat, following an outbreak of foot-and-mouth disease in the U.K. and the ongoing “mad cow disease” .

About half (48%) label the continuing conflict between the Israelis and the Palestinians as a major threat to the U.S. The same share rates China’s emergence as a world power and global climate change as major.

The public’s concerns have shifted over the past nine months. Today, more than half (53%) say that growing tension between Russia and its neighbors poses a major threat to the U.S. Last November, months before Russia seized control of Ukraine’s Crimea region, just about one-in-three (32%) named “growing authoritarianism in Russia” as a threat. 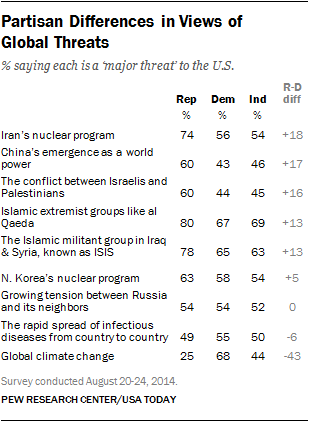 Republicans are more likely than Democrats and independents to see Islamic extremist groups, Iran’s nuclear program, China’s emergence as a world power and the Israel-Palestinian conflict as major threats to the U.S. On the other hand, global climate change registers for Democrats as among the greatest threats to the U.S. (68% major). By comparison, just 25% of Republicans see global climate change as a major threat to the U.S. 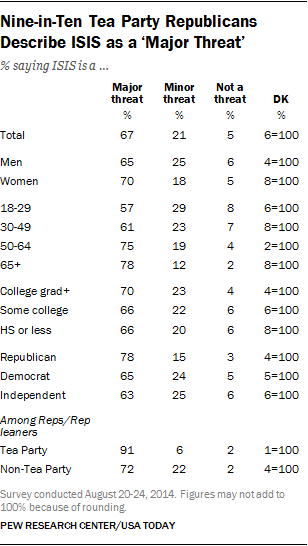 The emerging threat of ISIS, also known as ISIL or the Islamic State, especially concerns Republicans and older adults.

As with many other international concerns, adults ages 50 and older are more likely than younger adults to call ISIS a major threat. About three-quarters of older adults say ISIS is a major threat, compared with 61% of adults 30-49 and 57% of those younger than 30. 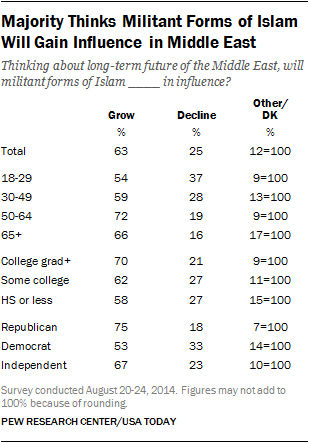 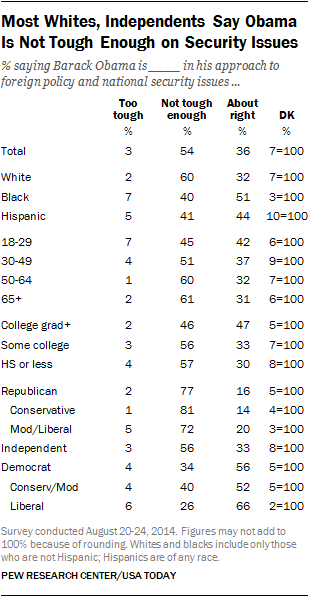 Foreign Affairs and PolicyTerrorismU.S. Global Image and Anti-AmericanismCountry ImageInternational Threats and Allies
Defining generations: Where Millennials end and Generation Z begins
25% in U.S. see at least some truth in conspiracy theory that COVID-19 was planned
Are you in the American middle class? Find out with our income calculator
Americans Who Mainly Get Their News on Social Media Are Less Engaged, Less Knowledgeable
Americans Fault China for Its Role in the Spread of COVID-19