Nearly three months after protests began in New York and later expanded to cities around the country, 44% support the Occupy Wall Street movement and 35% oppose it. Americans are much more likely to agree with the concerns raised by the movement than to approve of its tactics. By 48% to 30%, more Americans agree than disagree with the concerns the protests have highlighted. However, by a nearly identical margin (49% to 29%), more disapprove of the way the Occupy Wall Street protests are being conducted. Even those who say they agree with the concerns raised by the movement are somewhat divided over its tactics: 50% approve, while 40% disapprove.

The public is overwhelmingly critical of the fairness of the economic system. Most (77%) agree that there is too much power in the hands of a few rich people and corporations. And while a majority of Americans (58%) still say that “most people who want to get ahead can make it if they are willing to work hard,” this is lower than at any point since the question was first asked in 1994.

Nevertheless, most Americans continue to reject the idea that the United States is a country divided between the “haves” and the “have-nots.” Just 38% say they think of America this way. And there is little change in public optimism about the country’s ability to solve its problems; 60% say the country can. 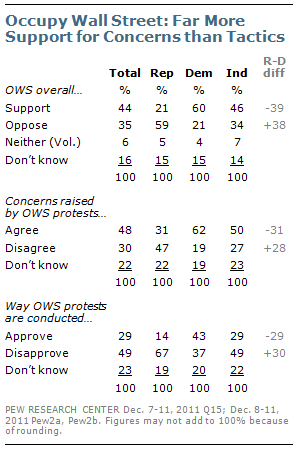 Views of the Occupy movement split along party lines. About six-in-ten Democrats (62%) agree with the concerns it has raised, compared with 50% of independents and 31% of Republicans. And while Democrats are divided about the way the protests are being conducted (43% approve, 37% disapprove), few independents (29%) or Republicans (14%) approve of the methods.

Younger Americans back the Occupy Wall Street protests more than others: A plurality of those younger than 50 supports the movement (47% support, 30% oppose), 50-to-64 year-olds are more divided (45% support, 38% oppose), and opposition is highest among those 65 and older (33% support, 47% oppose). 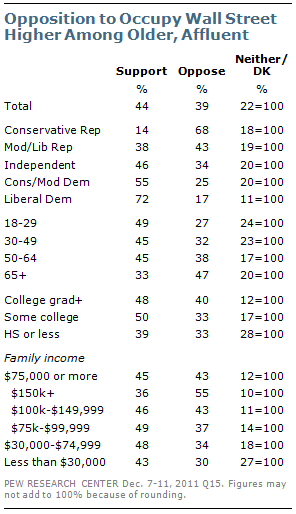 The Occupy movement, which has been focused on income and wealth divisions in the country, garners more support than opposition from Americans with annual family incomes of less than $75,000, while those earning more are about equally likely to support as oppose it (45% vs. 43%). But within that income group there are substantial internal divisions on this question: A majority of those with incomes of $150,000 or more (55%) oppose it, compared with fewer (40%) of those with incomes between $75,000 and $149,999. 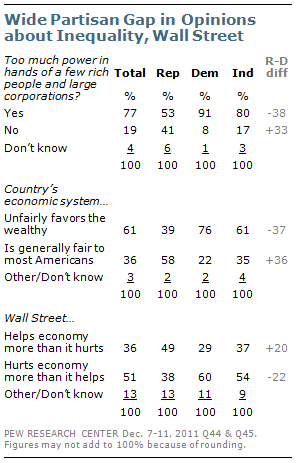 Roughly three-quarters of the public (77%) say that they think there is too much power in the hands of a few rich people and large corporations in the United States. In a 1941 Gallup poll, six-in-ten (60%) Americans expressed this view. About nine-in-ten (91%) Democrats and eight-in-ten (80%) of independents assert that power is too concentrated among the rich and large corporations, but this view is shared by a much narrower majority (53%) of Republicans.

Americans with annual family incomes of $75,000 or more are less critical of Wall Street than others. Half (50%) of higher income people say Wall Street does more good than harm, compared with just 31% of those with lower incomes.

More Are Skeptical that Hard Work Leads to Success 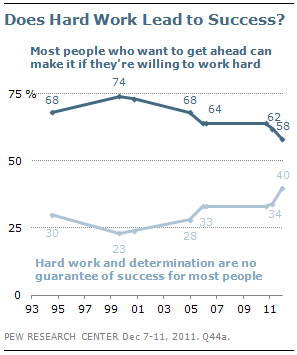 On the whole, Americans continue to say hard work leads to success; 58% agree with the statement that “most people who want to get ahead can make it if they are willing to work hard,” but this is substantially lower than the proportion expressing this view in previous surveys. Today, 40% agree that “Hard work and determination are no guarantee of success for most people,” which is up six points since March. 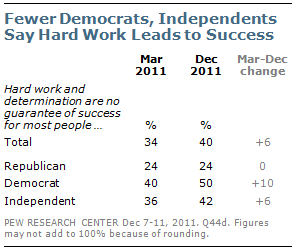 Independents also are more likely to express skepticism about the value of hard work than they were nine months ago (36% then, 42% now). Nonetheless, a majority of independents (56%) agree that most people can get ahead through hard work.

Republican views on this question are virtually unchanged over this period. Currently, 75% say most people who want to get ahead can make it if they are willing to work hard; just 24% say hard work is no guarantee of success for most people.

Most Say Country Not Divided Into “Haves,” “Have-Nots”

Even as they express frustration with the fairness of economic system, most of the public rejects the notion that the nation is divided into two groups: the “haves” and the “have-nots.” Nearly six-in-ten (58%) say they do not think of America in these terms, while just 38% say they do. Although opinions on this question have varied over the course of its more than 25-year history, for most of this period majorities have rejected characterizing the country in this way. And, as is the case today, if forced to choose between the options, pluralities have consistently identified themselves as “haves,” rather than “have-nots” (46% vs. 39% today).

Most Republicans (72%) and independents (60%) say they do not think of America in these terms. Democrats are more divided; 52% say the country is divided along these lines, while 46% say it is not.