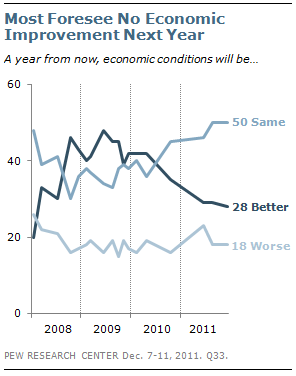 These grim expectations come even as fewer Americans say they are hearing mostly bad news about the economy. In a separate survey conducted Dec. 1-4, 36% said the economic news these days is mostly bad, down from 67% four months ago.

The public’s economic outlook has soured over the past two years. In June 2009 nearly half (48%) were optimistic about the economy, and as recently as April 2010, a 42% plurality expected economic conditions in the country to improve over the next year. That figure fell to 29% in June and August of this year and remains low, at 28% today. 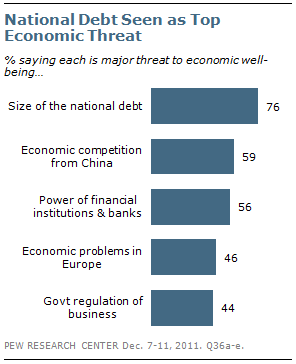 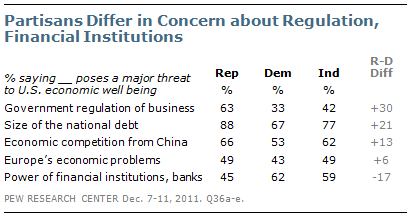 Most Democrats (62%) and independents (59%) say the power of financial institutions is a major threat to the nation’s economic well-being, compared with 45% of Republicans.

Europe’s economic problems are not widely seen as a danger to the U.S. economy. Only about half of Republicans and independents (49% each) say Europe’s problems represent a major threat to the economic well-being of the United States. Similarly, 43% of Democrats see the situation in Europe as a major threat.

Personal Finances: Not Great Now, But Expected to Improve

Americans’ assessments of their own finances have remained steady, if not especially positive. About four-in-ten call their personal financial situations excellent (6%) or good (32%), while more say they are in only fair (37%) or poor (24%) shape financially. 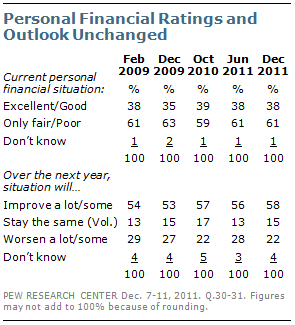 Republicans are more likely to say their current economic situations are excellent or good (54%) than are independents (36%) or Democrats (32%). Democrats are slightly more likely than Republicans to expect their personal finances to improve over the next year (62% versus 54%); 60% of independents also express optimism about their finances.