As voters look toward the 2012 congressional elections, anti-incumbent sentiment is running at or near record highs. Just 20% of voters say they would like to see most members of Congress reelected in the next congressional election. Two-thirds (67%) think most members of Congress should be replaced. This exceeds – by double digits – previous highs set in 2010, 2006 and 1994.

As is generally the case, voters are more positive about their own congressional representative. Half (50%) say they would like to see their own representative reelected while 33% say their representative should not be reelected. Still, this equals the level of anti-incumbent sentiment in 2010, when 58 incumbents went on to lose reelection bids – the most since 1948.

The level of anti-incumbent sentiment among Republican voters is particularly notable. Despite having won a majority in the House of Representatives – though not the Senate – last year, most Republicans continue to advocate a sweeping overhaul of congressional membership. Fully 70% say that most members should be replaced. This stands in stark contrast to how members of the party with a House majority have felt in recent elections. Republicans in 2006, and Democrats in 2008 and 2010, favored keeping most members in office, with only a few advocating a sweeping overhaul as Republicans do today. In those years, one party controlled both the House and Senate, unlike today.

Because of this Republican disgruntlement, there are only modest differences of opinion across party lines when it comes to reelecting 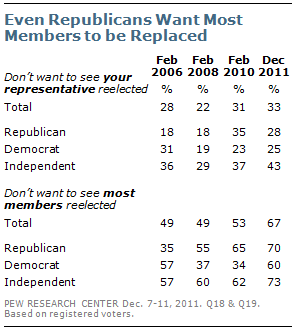 incumbents. Seven-in-ten Republican voters (70%) say most members of Congress should not be reelected, as do 60% of Democrats. And when it comes to their own representative, an almost identical number of Republicans (28%) and Democrats (25%) want to see their member of Congress replaced next year. 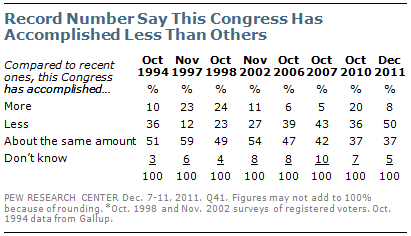 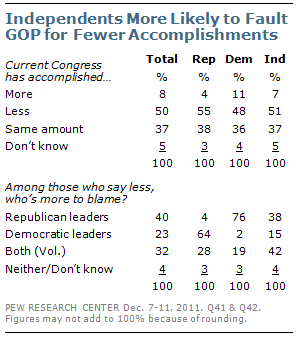 By a wide margin, those who say Congress has accomplished less than usual this year blame Republican leaders in Congress (40%) rather than Democratic leaders (23%). But there is plenty of criticism to go around; 32% volunteer that both parties’ leaders are to blame for the lack of accomplishments. Independents are especially likely to hold both parties responsible for Congress accomplishing less (42% volunteer this). Among independents who assign blame to one party, far more blame the GOP leadership than Democrats (38% to 15%). 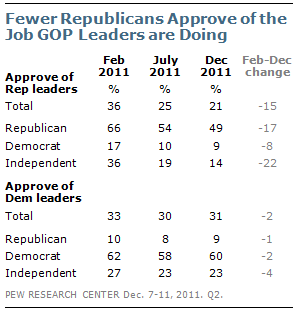 Republicans and Democrats overwhelmingly blame the other party’s leaders for Congress accomplishing less. But Republicans are more likely than Democrats to volunteer that both parties are to blame.

The leaders of both parties also continue to get very low approval ratings. Just 31% approve of the job Democratic leaders in Congress are doing. Even fewer (21%) approve of the performance of Republican congressional leaders. 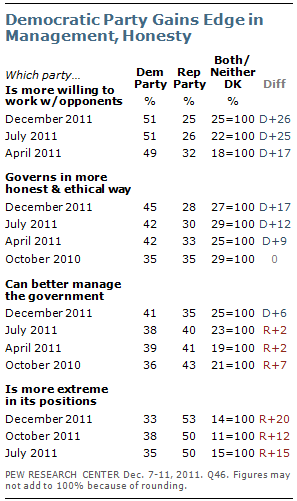 Democrats have a substantial lead over Republicans on several traits, such as willingness to work with political opponents and governing in an honest and ethical way. They also have an edge over the GOP as the party that can better manage the federal government. And far more continue to say the Republican Party is more extreme in its positions than say that about the Democratic Party.

By a two-to-one margin (51% to 25%) the public sees the Democratic Party as more willing to work with political leaders from the other party than the Republican Party. A majority (53%) says the GOP holds more extreme positions while 33% say the Democratic Party. 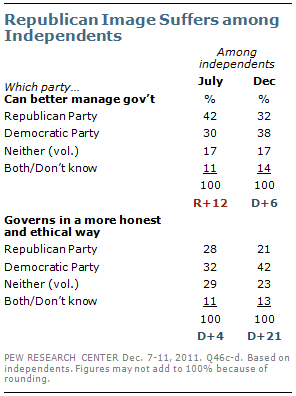 Currently, the Democrats have an edge over Republicans as the party better able to manage the federal government – 41% say the Democratic Party while 35% say the Republican Party. In recent years, the public has generally been divided in this evaluation, though the GOP held a slight advantage in October 2010.

Independents’ views of the parties’ effectiveness and credibility have shifted notably over just the past six months. In July, independents gave Republicans the edge as the party better able to manage the federal government, but the GOP has now lost that advantage. And where independents were divided as to which party was more honest and ethical in July, they now pick the Democratic Party over the Republican Party by two-to-one (42% vs. 21%).