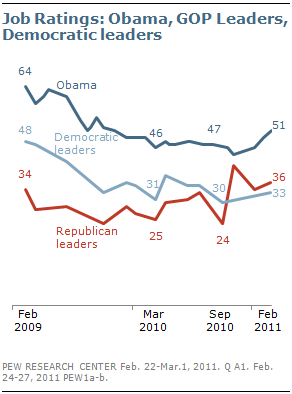 In the new survey, Barack Obama’s job approval stands at 51%; 39% disapprove of the way Obama is handling his job as president. That is little changed from early February (49% approve vs. 42% disapprove). Nonetheless, the balance of opinion regarding Obama’s job performance remains more positive than it was in the fall, when about as many disapproved as approved.

Approval of Republican leaders rose sharply between October and November, shortly after the GOP’s election victory. In early November, 41% approved of Republican leaders’ job performance, up 17 points from just a month earlier. Their job ratings have changed little since November. Job ratings for Democratic leaders have been stable in recent months, but are far lower than they were in February 2009 (48% approve), shortly after Obama took office.

Disagreements over Value of Political Compromise 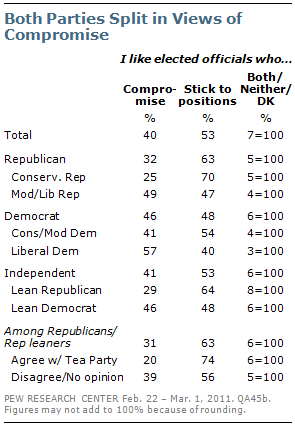 Republicans are divided along ideological lines in opinions about compromise: Just a quarter of conservatives (25%) like elected officials to compromise, compared with 47% of moderate and liberal Republicans. There are similar divisions between Republicans and Republican leaners who agree with the Tea Party (20% prefer compromise) and those who do not (39%).

Fewer Are Angry at Government, But Discontent Remains High Section 1: Attitudes About Government
Section 2: Views of Political Leaders and Compromise
Disagreements over Value of Political Compromise
Section 3: Attitudes Toward Social Issues Section 4: Opinions of Labor Unions About the Surveys