The ongoing demonstrations in Wisconsin over public worker benefits and collective bargaining rights have had little effect on overall views of labor unions. In the current survey, 47% hold a favorable view of labor unions, compared with 39% who have an unfavorable view. In early February – before the Wisconsin demonstrations – the balance of opinion was about the same (45% favorable, 41% unfavorable). 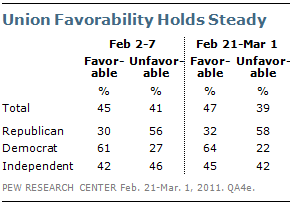 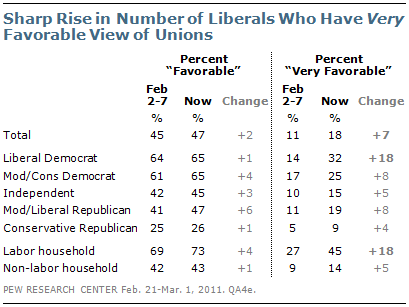 While overall favorability ratings have remained stable, the percentage holding a very favorable view of labor unions – as opposed to a mostly favorable view – has risen seven points. This rise has come primarily from intensifying views among two groups: liberal Democrats and union households.

Overall, about as many liberal Democrats hold favorable views of unions now (65%) as did so in early February (64%). However, the percentage holding a very favorable view has ballooned: from just 14% in February to 32% today – an 18-point rise in opinion.

A similar pattern can be seen among union member households. The percentage expressing very favorable views of unions has spiked from 27% to 45%. As the intensity of support for labor unions has grown in union households, overall favorability has remained about the same (69% in February, 73% now).

There has been no corresponding shift in opinion among conservative Republicans or non-labor households. Very unfavorable views of labor are about the same as they were in February for these groups, as negative views of labor have become no more intense.