The public’s views about federal spending are beginning to change. Across a range of federal programs, Americans are no longer calling for increased spending, as they have for many years. For the most part, however, there is not a great deal of support for cutting spending, though in a few cases support for reductions has grown noticeably. The survey also shows that the public is reluctant to cut spending – or raise taxes – to balance state budgets.

Despite these changing views, however, majorities or pluralities favor increased spending in five of 18 areas. Fully 62% favor increased funding for education – the highest percentage for any program tested and little changed from 2009 (67%). In all, there is only one area – economic assistance to needy people around the world – for which a plurality favors cutting federal spending. 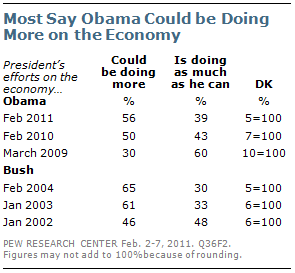 Still, views of former President Bush’s efforts to improve the economy at a comparable stage in his presidency were slightly more negative than they are for Obama today, though the economy was in much better shape. In January 2003, 61% said Bush could be doing more to improve economic conditions while 33% said he was doing all he could.

The survey finds somewhat more positive – or at least, less negative – views of the nation’s economy. Only about one-in-ten (12%) says economic conditions are excellent or good, a figure that has changed little over the past three years, but the proportion saying the economy is “poor” has edged lower. Currently 42% rate economic conditions as poor, which is virtually unchanged from December (45%), but down nine points from October (54%). 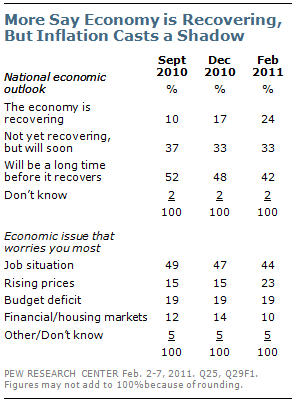 A plurality (42%) continues to say it will be a long time before the economy recovers, but that is 10 points lower than in September. The percentage saying the economy is recovering has more than doubled – from 10% to 24% – over this period.

As state budget problems worsen, most say that the states themselves should be responsible for addressing these problems, without the help of the federal government. Six-in-ten (60%) say the states should deal with budget shortfalls by raising taxes or cutting services, while just 27% favor the federal government giving more money to the states. These opinions are virtually unchanged from last June. 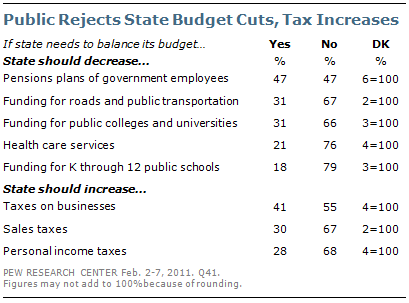 But there continues to be far more opposition than support for nearly all specific proposals to balance state budgets. Large majorities say their state should not decrease funding for primary and secondary education, health services, higher education, and road maintenance and public transportation. Most also oppose raising personal income and sales taxes, as well as taxes on business as ways to balance their state’s budget.

There is greater willingness to decrease funding for the pension plans of government employees. Even so, as many oppose this option as support it as a way to balance their state’s budget (47% each).

The shift in the balance of power on Capitol Hill has not changed the public’s view about the level of discord between the president and Congress. Fully 65% say Obama and GOP leaders are not working together on the important issues facing the country; an almost identical percentage (67%) expressed this view at the beginning of last year. As was the case a year ago, far more of those who say the two sides are not working together blame Republican leaders (31%) than the president (19%).

Next: Section 1: The Parties and the President
← Prev Page
You are reading page1Page2Page3Page4Page5Page6
Next Page →

Fewer Want Spending to Grow, But Most Cuts Remain Unpopular
Section 1: The Parties and the President Section 2: National Economy, Personal Finances Section 3: The Deficit and Government Spending Section 4: Dealing with State Budget Problems About the Surveys