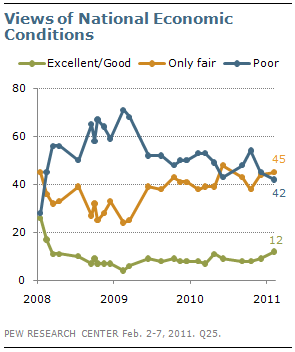 The public’s views of national economic conditions are broadly negative. Nearly nine-in-ten call conditions either only fair (45%) or poor (42%), and just 12% describe them as excellent or good. While negative on balance, national economic ratings have shown modest signs of improvement.

The number rating the economy as poor has declined across most demographic and political groups since October. There continues to be a wide partisan gap in views of the economy: 51% of Republicans currently say national economic conditions are poor, compared with 43% of independents and 36% of Democrats. 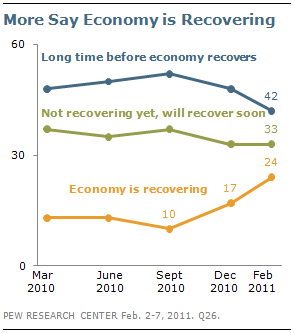 While economic ratings remain mostly negative, the public’s outlook continues to improve. In the current survey, more than half (57%) say the economy is now recovering (24%) or that it is not yet recovering but will soon (33%). About four-in-ten (42%) say it will be a long time before the economy recovers. 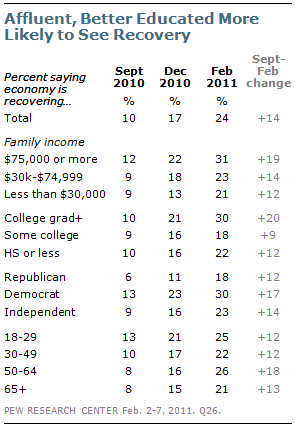 All political groups have become more optimistic about an economic recovery since September. However, more Democrats (30%) than Republicans (18%) and independents (23%) say the economy is in recovery.

The improved outlook on economic recovery mirrors what Americans say they are seeing and hearing in the news these days. Since December, there has been an increase in the 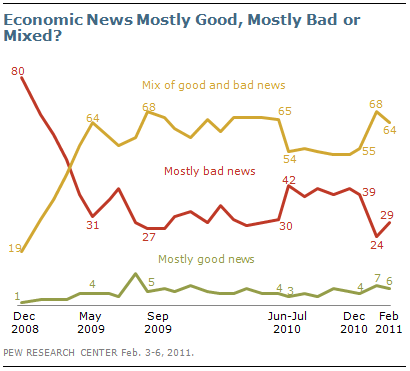 number hearing a mix of good and bad news about the economy, according to the Pew Research Center’s News Interest Index survey.

The survey found the number of those hearing a mix of economic news increased from 55% in December to 64% in February. There was also a 10-point drop in those hearing mostly bad news (39% in December, 29% in February). However, only a small minority (6%) say they are hearing mostly good news about the economy. (For more on this poll, including what people are hearing about specific segments of the economy, click here.)

In evaluating the effect of the recession on their own personal financial situation, only a minority (37%) say it did not have a major effect on them, while 61% say it did. Most who were affected – 36% of Americans overall – say their financial situation has yet to recover. But a significant minority – 25% of the public – say that while the economy had a major effect on their finances, they have mostly recovered.

The continuing toll of the recession on personal finances is most notable among the less affluent and educated. Roughly half (49%) of people with family incomes of $30,000 or less say they have not yet 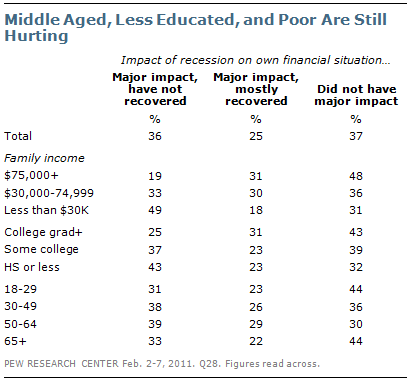 Both younger and older Americans are more likely to say they escaped the effects of the recession – 44% of those under 30 and those 65 and older say it did not have a major effect on them, compared with 33% of those ages 30 to 64. Instead, people in their prime working years are the most likely to say their finances have not yet recovered from the recession’s impact.

Next: Section 3: The Deficit and Government Spending
← Prev Page
Page1Page2You are reading page3Page4Page5Page6
Next Page →