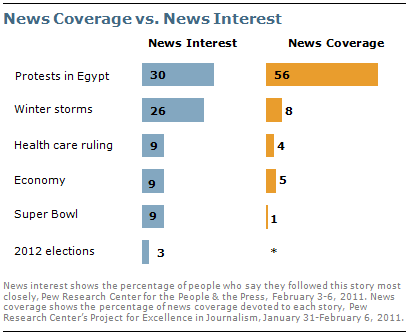 The public’s interest in news about the massive anti-government protests in Egypt surged last week, but did not keep pace with the growth in media coverage.

About a third (32%) of the public says they followed news about the protests in Egypt very closely last week. That’s nearly double the 17% that said this one week earlier.

Three-in-ten Americans (30%) say they followed news about the protests more closely than any other story, according to the latest News Interest Index survey conducted Feb. 3-6 among 1,001 adults. The previous week, just 11% said the protests were their top story.

But the many elements of the Egypt story accounted for 56% of media coverage last week, according to a separate analysis by the Pew Research Center’s Project for Excellence in Journalism (PEJ). That is among the highest levels of coverage for any story since PEJ started its weekly analysis four years ago – and the highest for a foreign news story. One week earlier, the protests accounted for 20% of coverage. (For more, see “Events in Egypt Trigger Record Coverage”.)

Despite increased public interest in the protests, about as many Americans (26%) say the story they followed most closely last week was the powerful winter storm system that hit the Midwest and the Northeast. That story accounted for just 8% of all news coverage, according to PEJ.

Attention to Egypt Lags Behind Haiti Quake and Chilean Miners 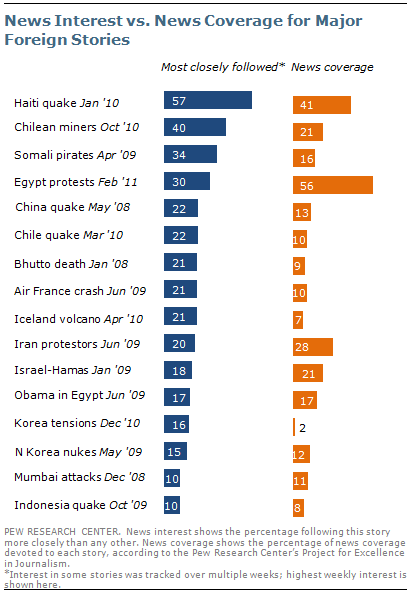 In January 2010, close to six-in-ten (57%) said the earthquake that devastated Haiti was the story they followed most closely that week. Six-in-ten (60%) said they followed this news very closely. News about Haiti that week accounted for 41% of the newshole that week.

Last October, 40% said the story they followed most closely was the rescue of a group of Chilean miners who had been trapped underground for months. Nearly half (49%) said they followed this news very closely. The story accounted for 21% of coverage for the week.

In April 2009, the public took a strong interest in news about pirates commandeering ships off the coast of Somalia. About a third (34%) said this was the story they followed most closely that week; 41% said they were following this news very closely. News about the pirates made up 16% of the newshole. 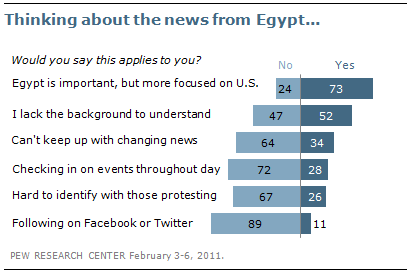 Many Americans say the issues surrounding the Egyptian protests are difficult to fully comprehend and, at a time of continuing economic trouble at home, most say they are more concerned with what is going on in the United States. Close to three-quarters (73%) say that while this story is important, “there are issues in the United States that concern me more.”

About half (52%) say they feel they lack the background information to really know what is going on in the Egyptian crisis.

Few say they find it hard to identify with the people who are protesting in Egypt (26%); 67% say that is not the case. And most disagree with the notion that the news is changing so quickly they cannot keep up (64%). About a third (34%) say they do feel that way. 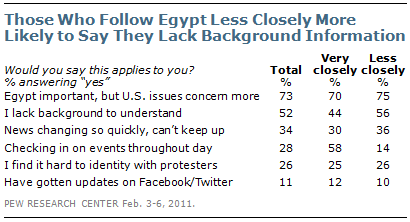 this is important news, there are issues at home that concern them more. Three quarters of those following less closely agree (75%).

Those not paying close attention to Egypt news are more likely to say they do not have the background information to know what is really going on. Few Americans, irrespective of their level of interest, say they find it hard to identify with the protesters.

Not surprisingly, those following very closely are much more likely to say they have been checking in on events on Egypt several times a day (58% vs. 14%). And only small percentages in each group say they have gotten updates on the situation through social media such as Facebook or Twitter. 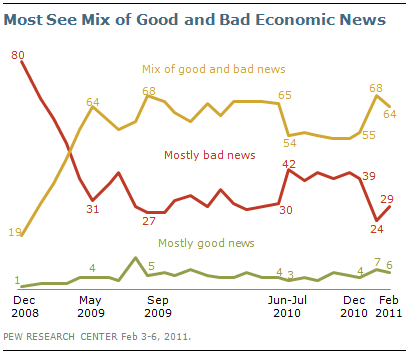 These numbers have changed only slightly since January, when perceptions of the economic news mix proved much more positive than one month earlier. In January, 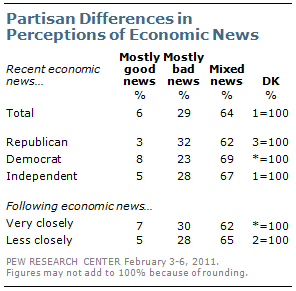 By contrast, more Americans report hearing bad news about consumer prices now than in December (49% now, 41% then). That is the highest level saying that since the question was first asked in June 2009. The percentage hearing mostly good news about prices dropped from 16% in December to 7% this month.

Fully 45% say they very closely followed news about the massive storm system that swept across much of the country last week. This was the top story for 26% and accounted for 8% of the news coverage measured by PEJ. Not surprisingly, interest in the wild winter weather was greatest in the Northeast (56% very closely) and the Midwest (54%), the regions hardest hit. Those in western states expressed the least interest (28% very closely)

A quarter (25%) say they followed news about a federal judge’s ruling that part of the nation’s new health care law is unconstitutional; 9% say this is the news they followed most closely. Republicans (33%) are more likely to say they followed this news very closely than Democrats (23%) or independents (21%). The continuing debate over the health care law enacted last year accounted for 7% of coverage last week. More than half of that – 4% of the total — focused on the court ruling.

And as Republican candidates start talking about possible challenges to Barack Obama next year, 15% say they followed news about the 2012 presidential elections very closely; 3% say this was the news they followed most closely. News about the next campaign made up less than 1% of coverage.

Republicans and Democrats are about equally likely to say they followed this news very closely (21% of Republicans, 16% of Democrats). Just more than one-in-ten independents (12%) says this.

These findings are based on the most recent installment of the weekly News Interest Index, an ongoing project of the Pew Research Center for the People & the Press. The index, building on the Center’s longstanding research into public attentiveness to major news stories, examines news interest as it relates to the news media’s coverage. The weekly survey is conducted in conjunction with The Project for Excellence in Journalism’s News Coverage Index, which monitors the news reported by major newspaper, television, radio and online news outlets on an ongoing basis. In the most recent week, data relating to news coverage were collected January 31 – February 6, and survey data measuring public interest in the top news stories of the week were collected February 3-6, from a nationally representative sample of 1,001 adults.

The analysis in this report is based on telephone interviews conducted February 3-6, 2011 among a national sample of 1,001 adults 18 years of age or older living in the continental United States (670 respondents were interviewed on a landline telephone, and 331were interviewed on a cell phone, including 131 who had no landline telephone). The survey was conducted by interviewers at Princeton Data Source under the direction of Princeton Survey Research Associates International. A combination of landline and cell phone random digit dial samples were used; both samples were provided by Survey Sampling International. Interviews were conducted in English. Respondents in the landline sample were selected by randomly asking for the youngest adult male or female who is now at home. Interviews in the cell sample were conducted with the person who answered the phone, if that person was an adult 18 years of age or older. For detailed information about our survey methodology, see: https://www.pewresearch.org/politics/methodology/detailed.