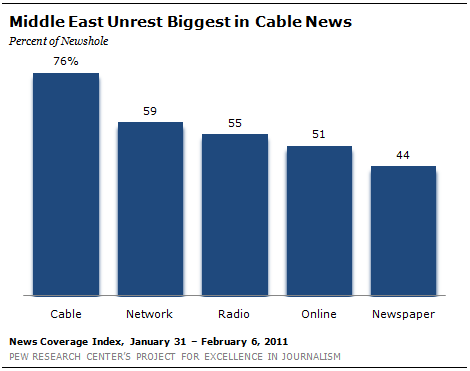 Last week’s turmoil in the Middle East registered as the biggest international story in the past four years—surpassing any coverage of the Iraq war, the Haiti earthquake and the conflict in Afghanistan.

From January 31-February 6, the Mideast saga, driven by televised images of the protests and power struggle in Egypt, filled 56% of the newshole studied by the Pew Research Center’s Project for Excellence in Journalism. Not only was that easily the biggest overseas story in a single week since PEJ began its News Coverage Index in January 2007. It registered as the fourth-biggest story of any kind—trailing only two weeks in the 2008 presidential campaign and the aftermath of the January 8, 2011 Tucson shooting spree.

Until now, the biggest international story of any single week (43%) was the Iraq war from September 9-14, 2007. And most of that was driven by the domestic policy debate over the war—including General David Petraeus’ progress report to Congress and a speech by President George W. Bush. The Haiti earthquake that killed as many as an estimated quarter million people filled 41% of the newshole from January 11-17, 2010.

The closest parallel to the Egyptian unrest last week in the last four years were the widespread protests that followed the disputed Iranian elections—and they accounted for only half as much coverage (28%) from June 15-21, 2009 as the Egyptian protests did last week. The biggest week of coverage of the war in Afghanistan in the past four years (27%) occurred from November 30-December 6, 2009 when President Obama announced a surge of 30,000 additional troops.

Why has an event that has not involved U.S. troops or directly imperiled U.S. citizens generated significantly more attention than the country’s two wars? One major reason is the number of cameras and journalists (including network anchors) in the country transmitting such riveting scenes as last week’s video of men on camels attacking crowds of protestors in Cairo. Another is the high stakes for the U.S. in one of the world’s most volatile regions as it tries to balance a strategic alliance with President Hosni Mubarak and support of pro-democracy protestors. A third factor may be uncertainty—will Mubarak resign and who will govern after him? And some of last week’s coverage was driven by the fact that the media themselves became part of the story—with journalists being harassed, attacked and detained amid the chaos.

Even though the Obama Administration’s handling of the situation to date has not produced a major partisan battle in Washington, the story still devoured 84% of the airtime studied on the ideological cable talk shows—which are often crucial to keeping a story soaring at high altitude.  Indeed some of those hosts last week were more willing than many public officials to voice strong opinions on the subject.

Every other news event last week was overwhelmed. The No. 2 story, well back at 8%, was the blizzard that pounded the Midwest, making this the second week in a row that bad winter weather was among the top five stories. Next at 7%, was coverage of the health debate, fueled by the news that a Florida judge had ruled the new legislation was unconstitutional. The economy followed, as the No. 4 story at 5%, followed by continuing coverage of the recent Arizona shootings, at 2%.

The Protests in Egypt—Week II

With coverage of the Mideast unrest nearly tripling—up to 56% from 20% the previous week—it was easily the No. 1 story in all five media sectors studied.

Every day seemed to offer a new development that helped fuel coverage.

On February 1, it was the size and intensity of the demonstrations that drew notice. “Thousands upon thousands of demonstrators converged Tuesday on Tahrir Square, and spilled over onto the streets that flow into it,” the Washington Post reported. “And as more thousands kept pouring in throughout the day, it was clear that a contagion had set in. This was a place to be, this was a moment not to be afraid of…”

That same day, there was another significant development with President Mubarak announcing, as AFP reported, that “he will not seek re-election in September,  but reject[ing] demands that brought a million people on to the streets around the country that he quit immediately.”

At that point, part of the story became journalists in peril. CNN’s Anderson Cooper told viewers:  “We have been advised to actually turn off our lights, get down on the floor and try to barricade ourselves in the area that we’re in.” Fox News correspondent Greg Palkot provided his account of how pro-government protestors “hit us with their open hands, their fists, sticks, bars, rocks, whatever was around, especially aiming at our heads. They grabbed us and punched us.”  On February 3, came word that, with the security situation deteriorating, network anchors Katie Couric (CBS) and Brian Williams (NBC) had left Cairo where they had been broadcasting.

The next day, an Obama press availability seemed to ratchet the pressure up on old ally Mubarak, when the U.S. president said that it’s “clear that there needs to be a transition process [in Egypt] that begins now.”

By the weekend, the story shifted again, this time toward efforts at substantive meetings between Egyptian opposition figures and representatives of the government. But part of the media narrative also purveyed a growing sense that, despite the momentum of the protestors, an early or clear outcome was far from certain.

“The quick ouster of Tunisia’s president fed expectations that Egyptian President Hosni Mubarak could fall just as fast, but the crackdown on anti-government protesters and journalists in Egypt last week was a sobering reminder that regime change is rarely easy and the path of mass movements hard to predict,” stated a January 6 Washington Post story.

Generally, international topics get relatively limited attention from the cable talkers. So do issues that don’t produce partisan Beltway battle lines. But in this case the talk culture was consumed with the story. And while much of official Washington was more muted, or even quietly supportive of the president, TV hosts were engaged in a more ideological critique.

CNN’s Eliot Spitzer sparred with a radical Islamic activist, telling Imam Anjem Chourdary that the Mideast protestors want jobs and freedom, “but they are not embracing your form of theocracy in any way, shape, or form.” 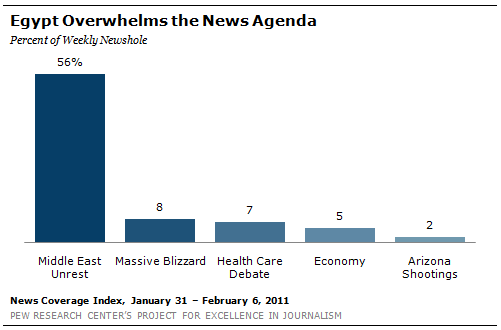 On MSNBC, liberal Rachel Maddow criticized the U.S. track record: although America says it “is willing to support regime change in Egypt [it] is only in the context of the fact that the United States has made the Mubarak presidency possible in so many ways over the past 30 years. Will the Arab world ever care what we have to say anymore about strongmen given our record of propping them up?”

On the other side of the spectrum, conservative Fox News host Sean Hannity warned that the Obama Administration’s support for the pro-democracy protestors could usher in the ascent of the Muslim Brotherhood. That “could mean another Iranian-style theocracy,” Hannity added. “I don’t sense the president has an awareness of just how dangerous this group can be.”

With reporters in the field covering the situation on the ground and commentators in the studio chewing over events each night last week, there was no respite in the coverage. For the first half of the week (Monday through Wednesday), the story accounted for 56% of the overall newshole. From Thursday through Sunday, it filled 57%.

The week’s No. 2 story, at 8%, was the winter wallop that hit the Midwest particularly hard, dumping nearly two feet of snow in Chicago and closing schools there for the first time in 12 years. As is often the case, dramatic weather stories get the most play on broadcast news and last week, they accounted for 21% of the airtime studied on the network newscasts and morning shows.

The health care debate, driven by Federal Judge Roger Vinson’s ruling in Florida against the new health care law, was next at 7%. This topic was particularly popular among the radio talk show hosts, who devoted 32% of the airtime studied to health care last week. That stands in contrast to the cable talkers who were absorbed with the Middle East and only devoted 7% of their airtime to health care.

Coverage of the economy, at only 5% of the newshole, plunged from 13% the previous week. The biggest storyline focused on new numbers showing the unemployment rate dropping to 9% even as the economy added a disappointing 36,000 jobs. The aftermath of the Arizona shootings, which had riveted the country, fell to just 2% of coverage studied. Last week’s major newsmaker was the decision by Giffords’ husband, Mark Kelly, to return to the space program. 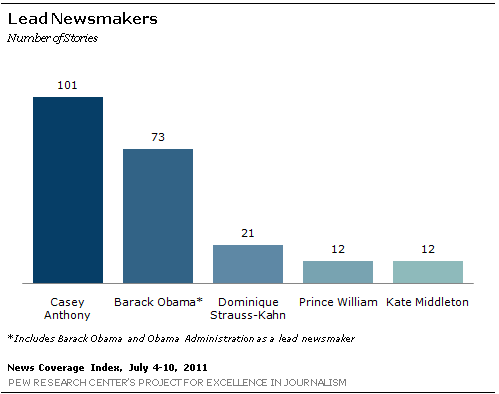 From January 31-February 6, beleaguered Egyptian President Hosni Mubarak was the most dominant figure in the news. He was a prominent newsmaker in 8% of all the week’s stories, a major jump from the previous week when he registered at 1%. (To be a dominant newsmaker, a figure must be included in at least 50% of a story.) Barack Obama, normally the top newsmaker, was No. 2 last week, at 6%.

The next two newsmakers were Mark Kelly (2%) and his wife, Gabrielle Giffords (1%). They were followed in the No. 5 slot by Judge Roger Vinson (also at 1%), who ruled the new health care law unconstitutional last week.