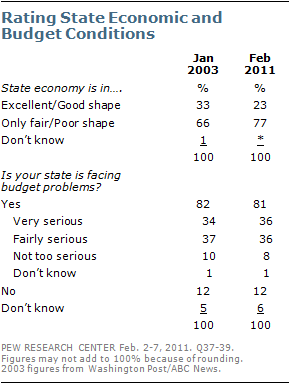 There has been virtually no change in opinion about the seriousness of the state budget problems compared with public perceptions eight years ago. A January 2003 Washington Post/ABC News survey found 82% saying their state faced budget problems, and 34% describing those problems as very serious. 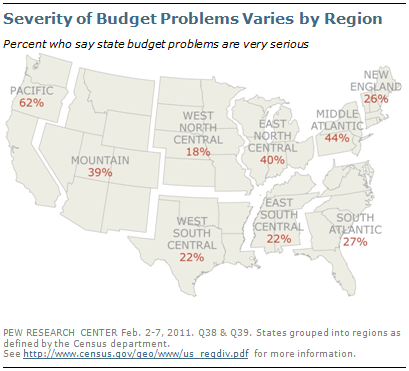 States Responsible for Their Own Problems

If states are facing default over the course of the coming year, there is little public support for a federal government bailout. Six-in-ten (60%) say that if states can’t balance their budgets, they should deal with it themselves by raising taxes or cutting services. Only 27% say that the federal government should give more money to the states to help them meet their budgets, even if it means higher federal deficits. These views ar 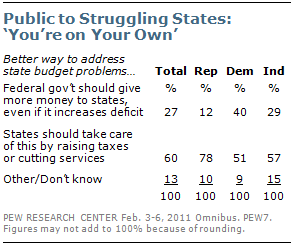 How Should States Handle Budget Problems? 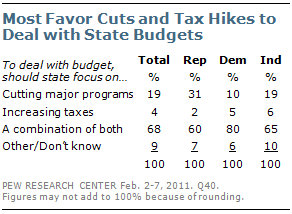 The public thinks the best way for states to deal with their budget problems is through a combination of spending cutbacks and increased state taxes. About two-thirds (68%) say their state lawmakers should do a combination of cutting major programs and increasing taxes. Far fewer (19%) think that focusing mostly on cutting major programs is the best way to deal with the budget in their state. Only 4% say focusing mostly on increasing taxes is the best approach.

There is broad bipartisan agreement that to tackle the budget problems many states are facing, lawmakers should cut major programs and increase taxes. Majorities of Democrats (80%), independents (65%) and Republicans (60%) favor a combination of cutting spending and increasing taxes. Even among Republicans, only 31% say the best way to address state budget problems is to focus mostly on cutting major programs.

While the public supports a combination of major cuts and tax increases in the abstract, there is far less support for some of the specific proposals many states are considering. Of eight possible proposals for dealing with state budgets, none receives majority support. 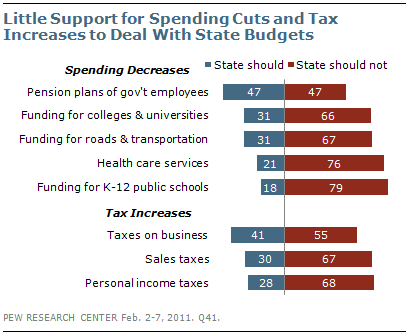 Decreasing the pension plans of government employees receives the most support from the public, though as many oppose the idea as support it (47% each). Only about three-in-ten support their state cutting funding for public colleges and universities (31%) or decreasing funding for maintaining roads and public transportation (31%). Even fewer favor decreases in health care services (21%) or in funding for K through 12 public schools (18%).

When it comes to raising taxes, 41% think their state should increase taxes on businesses while 55% are opposed to this. The public is less supportive of increasing or establishing state sales taxes (30%) or personal income taxes (28%).

Partisans differ on the various ways states can reduce their budgets, but opposition to most proposals crosses party lines. In general, Republicans are more likely than Democrats to support spending cuts in their state, with the exception of reducing funding for roads and public transportation. But even among Republicans, the only spending decrease that receives majority support is reducing the pension plans of government employees. 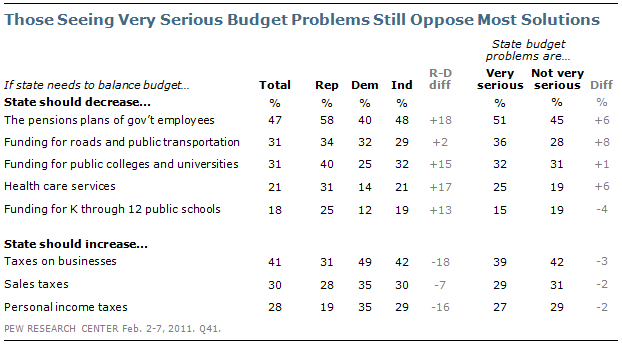 Democrats are more likely than Republicans to support increasing taxes on businesses and raising personal income taxes, though neither idea garners majority support from either party, or from independents. And there is substantial opposition to sales tax increases across party lines.

There continue to be strong partisan differences in views of the federal government. More than twice as many Democrats (58%) as Republicans (25%) express a favorable opinion of the federal government, as has been the case since Barack Obama took office. The pattern was reversed during George W. Bush’s administration, with Republicans expressing more favorable views than Democrats.