Overall, the public is divided over whether it is more important for the federal government to reduce the 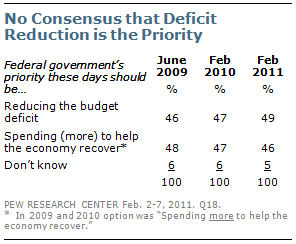 Over the past year, there has been no increase in the number of Americans who cite the budget deficit as the economic issue that worries them most. The job situation (44%) remains the top economic concern, followed by rising prices 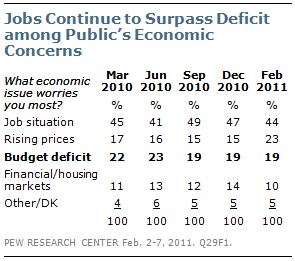 (23%) which is up from 15% just two months ago. About one-in-five (19%) cite the deficit, which is largely unchanged since last March.

While a large majority of Republicans (70%) prioritize deficit reduction over spending on economic recovery, they are divided over which economic issue worries them most. About as many Republicans cite the job situation (39%) as the budget deficit (36%).

By a slight margin (51% to 44%), independents place a higher priority on reducing the deficit over spending to help economic recovery. More than twice as many independents say the job situation (44%), rather than the budget deficit (19%), is their top economic concern.

Democrats, by contrast, place a higher priority on spending to boost the recovery (by 64% to 32%). Half of Democrats (50%) say the job situation is the economic issue that worries them most while just 8% cite the budget deficit. 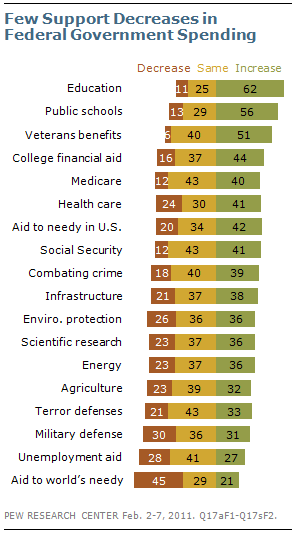 The public’s taste for cuts in federal government spending on specific programs remains limited. More want to see spending increased than decreased on 15 of 18 issues tested. The only area where a plurality favors decreased spending is on economic assistance to needy people around the world; even here, just under half (45%) support spending cuts, while 21% say spending should be increased and 29% want to keep spending the same. In two other areas – military defense and assistance for the unemployed – the numbers favoring cutbacks are roughly equal to the numbers favoring increases.

While there is modest support for spending cuts, substantial numbers are willing to see spending held steady. Pluralities say government spending on anti-terrorism defenses and unemployment assistance should be kept the same.

In this regard, majorities favor either cuts or spending freezes on 15 of the 18 issues tested. Education, public schools and veterans’ benefits are the only areas where half or more favor increased spending.

Public attitudes about government spending have changed substantially over the past two years. For 12 of the 13 issues where 2009 trends are available, either support for increased spending has fallen or support for spending cuts has grown (or both).

Terrorism defenses is the only area where there has not been a statistically significant shift in a more austere direction over the past two years.

The largest shift in public spending preferences since 2009 is in the area of health care. The share of Americans who want the government to spend more on health care has fallen from 61% in 2009 – during the early stage of the debate over health care legislation – to 41% today. The proportion favoring decreased spending for health care has more than doubled since then, from 10% to 24%. Nearly half of Republicans (47%) want cuts in funding for health care, up from just 15% two years ago.

Even on some popular budget items, such as Medicare and veterans’ benefits, there have been sharp declines in the percentages favoring more spending – 13 points for Medicare and 12 points for veterans’ benefits and services. On both issues, the balance of opinion is still toward expanded rather than decreased spending, but by a significantly narrower margin than in 2009.

At the other end of the spectrum, the public has in the past been less enthusiastic about spending on economic assistance to needy people around the world than on other priorities. Two years ago 34% said this should be cut back, and this has risen to 45% today.

Republicans tend to be more supportive of reducing spending across most issues, and their views have often shifted further

in the past two years, leading to even larger partisan differences in spending preferences. The share of Republicans who want to reduce spending on foreign aid spiked from an already high 40% in 2009 to 70% today, while Democratic and independent attitudes remained relatively steady.

Fully half (50%) of Republicans today say spending on unemployment assistance should be decreased, roughly double the share who said this two years ago (26%). And Republican support for reductions in spending on health care and environmental protection has also risen substantially.

Meanwhile, more Republicans favor cuts than increases on four of the 18 items. There is no program for which significantly more Democrats support cuts rather than increases.

There also are wide gaps over funding for foreign aid and environmental protection. By 70% to 7%, Republicans favor cutting, rather than increasing, aid for needy people around the world. Democrats are more evenly divided (32% increase, 28% decrease). Nearly half of Democrats (47%) support increasing spending for environmental protection while nearly as many Republicans (43%) want to decrease spending in this area.

Fully 77% of Democrats support increased spending on education, compared with 45% of Republicans. On the specific issue of financial aid for college students, 51% of Democrats favor providing more funding while just 9% would cut funding; as many Republicans would cut as increase spending on financial aid for college students (30% each).

On many of these issues, independent views fall roughly in between the Republican and Democratic positions. But on a few key items, independents’ spending preferences are far closer to those of Democrats than Republicans. Notably, independents support increased spending on college financial aid and on rebuilding highways, bridges and roads at nearly the same rate as Democrats. Conversely, 36% of Democrats and 33% of independents favor cuts in defense spending, compared with only 18% of Republicans. 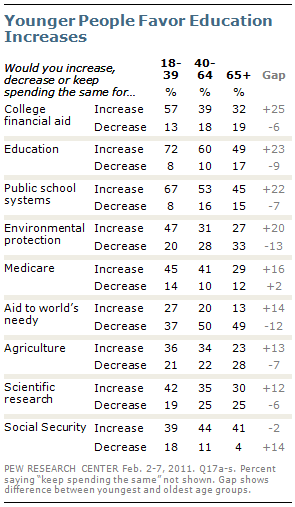