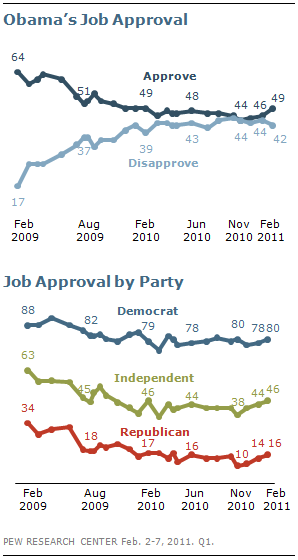 Barack Obama’s approval ratings have improved somewhat in the last few months. Currently, more Americans say they approve of the way he is handling his job as president than say they disapprove (49% vs. 42%). Opinion was more closely divided throughout the fall and earlier this winter (in November 44% approved while an identical percentage disapproved). Obama’s approval ratings are now on par with his ratings in the winter and spring of last year.

While Democratic opinion of the president’s job performance has remained relatively steady since the fall (currently 80% approve), his ratings among independents and Republicans have improved over that period. Today, 46% of independents approve of Obama’s performance, up from a recent low of 38% after the midterm election.

While just 16% of Republicans approve of Obama’s job performance, that represents a return to the levels seen earlier in his term and an improvement from an all-time low of 10% following the GOP’s midterm victories. 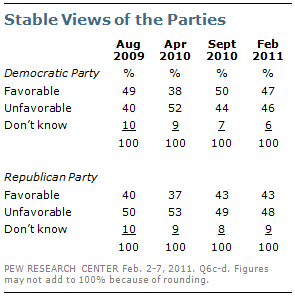 A few weeks into the new congressional session, views of both the Democratic and Republican parties are little changed since September. Today, opinions of the Democratic Party are about evenly split: 47% have a favorable opinion, 46% have an unfavorable opinion. At best, this is slightly better than the overall rating given to the Republican Party (43% favorable, 48% unfavorable).

But opinions of both parties have improved substantially from a low point following the heated debate over health care reform last spring, when favorability ratings for both parties fell into negative territory. This recovery is most noticeable among political independents. Today, 40% of independents offer a favorable assessment of the Democratic Party, up from 27% last spring. And 41% feel favorably toward the GOP, up from 33%.

Overall, partisans on both sides express broad satisfaction with their political parties: 83% of Republicans and 87% of Democrats offer a favorable assessment of their parties. 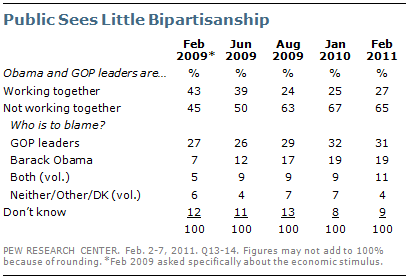 When asked who is to blame for the lack of bipartisan cooperation in Washington, far more people blame the Republican leaders in Congress (31%) than Barack Obama (19%), though another 11% volunteer that both are equally to blame. By about four-to-one, Republicans place blame with Obama (46%) rather than their party’s leadership (11%). In contrast, 52% of Democrats lay the blame at the feet of Republican leaders and just 3% attribute it to Obama. Independents are about twice as likely to say GOP leaders are to blame than say Obama is to blame (27% vs. 14%). These partisan dynamics are nearly identical to opinion in January 2010.