Along with their demographic distinctions, those whose most common way of getting political and election news is social media also stand out for their relative lack of engagement with a number of major stories in the news.

While the coronavirus pandemic and the social unrest in the wake of the police killing of George Floyd have pushed attention to the presidential election coverage to the sidelines, those in the social media news group are still paying less attention to news about the candidates than people who get political news through most other platforms, including print, radio, television and digital news sites.

The same holds true for news about the coronavirus pandemic, which has commanded widespread public attention since it first disrupted life in the U.S. in March. Once again, the level of attention given to this story by the social media news group lags well behind most other news consumption groups. Similarly, social media news users are somewhat less likely than others to say they are very closely following demonstrations to protest the killing of Floyd in police custody as of early June.

Given the tendency of older adults to generally follow news more closely than younger ones, some of the relative lack of attention to these stories is connected to the fact that those who use social media to follow political news are disproportionately young. However, even among Americans ages 50 and older, those who turn to social media most for their political news are less likely than others in their age group to be following both COVID-19 news and news about the election very closely.

The one group that tends to follow news at similarly low levels is U.S. adults who rely most on local TV for political news. (See Chapter 1 for similarities and differences between these two groups.)

Those who rely on social media for political news follow the 2020 presidential candidates less closely, less aware of political storylines 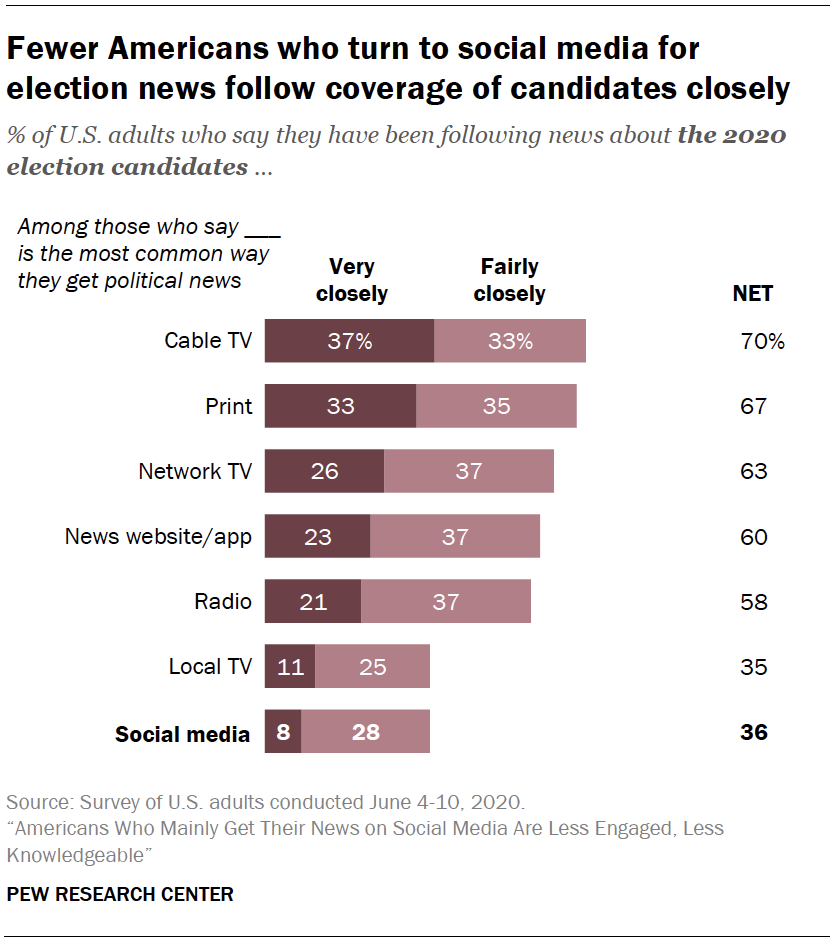 Americans who say social media is their most common way of getting election and political information are among the least likely to be following news about the 2020 presidential candidates “very closely,” at only 8%, according to a survey conducted June 4-10. Only the local television news group, at 11%, has a comparably low share following the election very closely. Among all other groups, about 20% or more say they are following news about the 2020 election very closely, with those in the cable TV group at the high end of 37%.

The social media group’s relative lack of engagement with news about the candidates is in line with a survey administered in late February and early March that asked how much people had heard about six specific storylines related to politics and the Trump administration.

About three-in-ten (31%) in the social media news group said they had heard a lot about the Trump administration possibly using political influence on criminal cases at the Department of Justice, and 32% said they had heard nothing at all about that. In contrast, half or more of those in five of the other news consumption groups (print, cable TV, radio, digital news sites and network TV) had heard a lot on that subject, while far fewer had heard nothing at all. 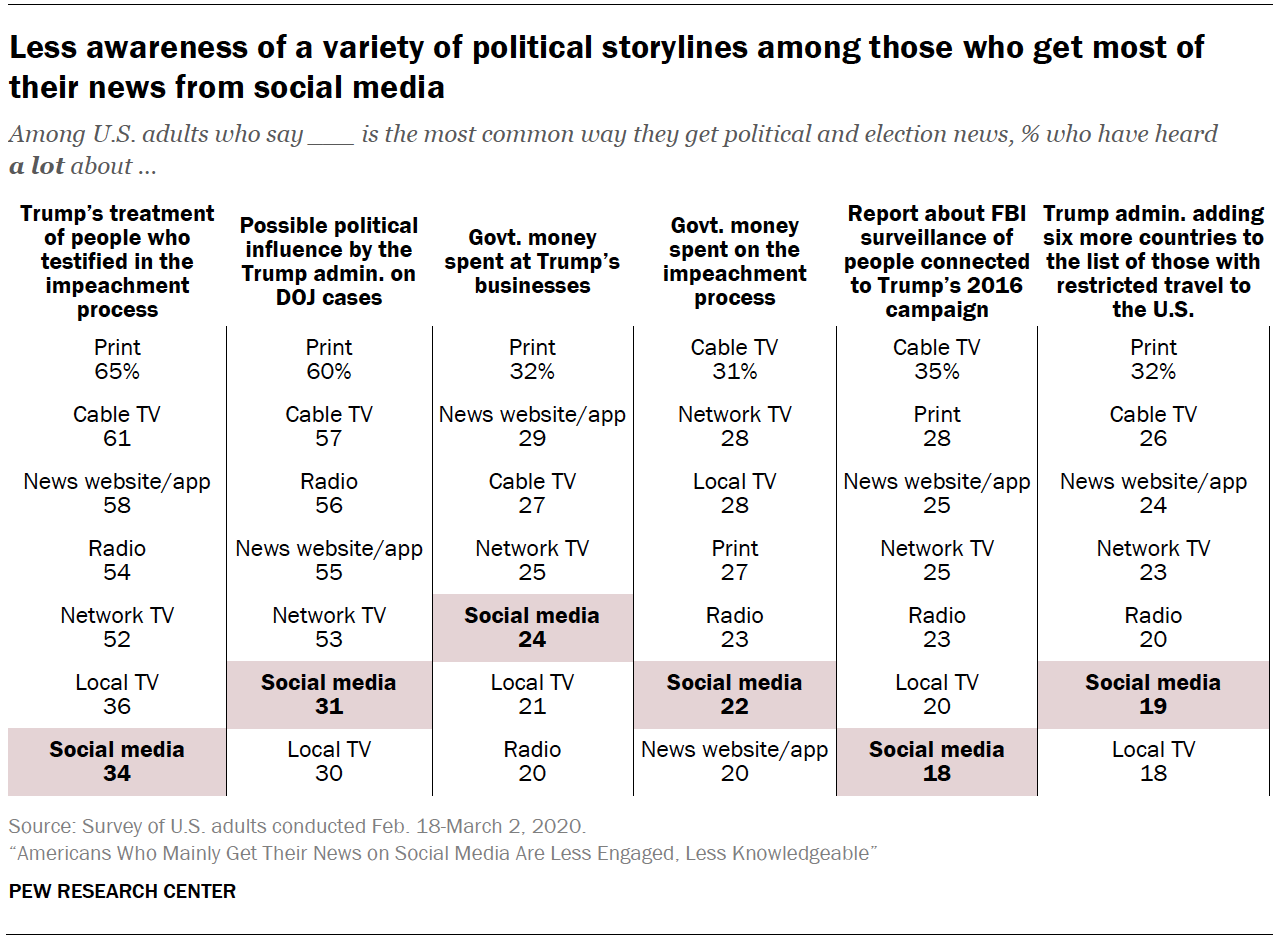 On another issue, 18% of those whose most common way of getting political news is social media said they had heard a lot about a report of FBI surveillance of people connected to the Trump campaign. About twice as many (41%) said they had heard nothing at all. 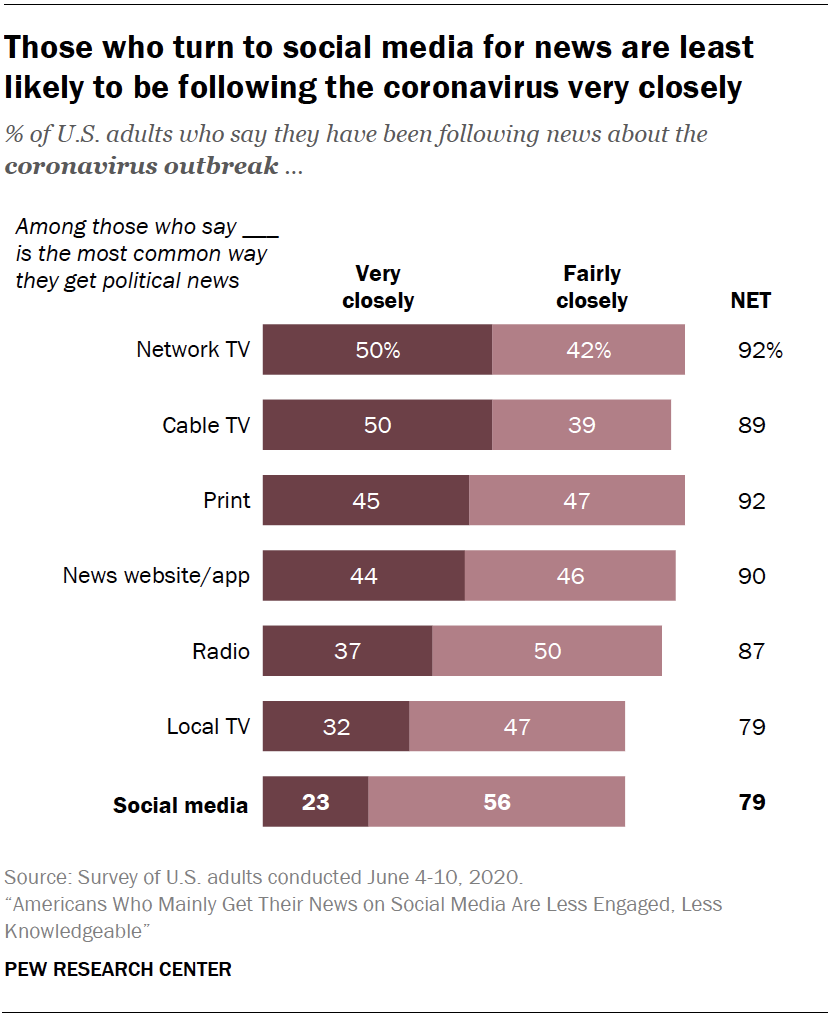 As is the case with news of the presidential candidates, Americans who cite social media as their most common platform for political news have been the least likely to follow coverage of the coronavirus outbreak very closely. As of June, about a quarter of U.S. adults who rely most on social media for political news (23%) say they are following the pandemic very closely – considerably fewer than news consumers on any other platform. Fully half of those who rely mainly on national network television and cable TV say they are tracking coronavirus coverage very closely.

Most of those who rely on social media for news (56%) say they have been following news about the virus “fairly” closely. Still, the combined share in the social media news group who say they are following COVID-19 news “very” or “fairly” closely (79%) is lower than in all other news consumption groups, with the exception of local TV (also 79%).

In April, about a month after the coronavirus pandemic began spreading rapidly in the U.S., a survey asked U.S. adults how closely they were following a series of 13 different topics related to both national and local aspects of the outbreak. Those who say social media is their most common way of getting political and election news were consistently near the bottom when it came to how closely they were following these topics.

At that time, about three-in-ten in the social media group (31%) said they were following the issue of the national economic impact of the pandemic very closely, 10 points lower than the next lowest group (local television at 41%). In contrast, half or more of those who turn most to cable TV (58%), national network TV (55%) and print newspapers (53%) were following the virus’s economic fallout very closely. 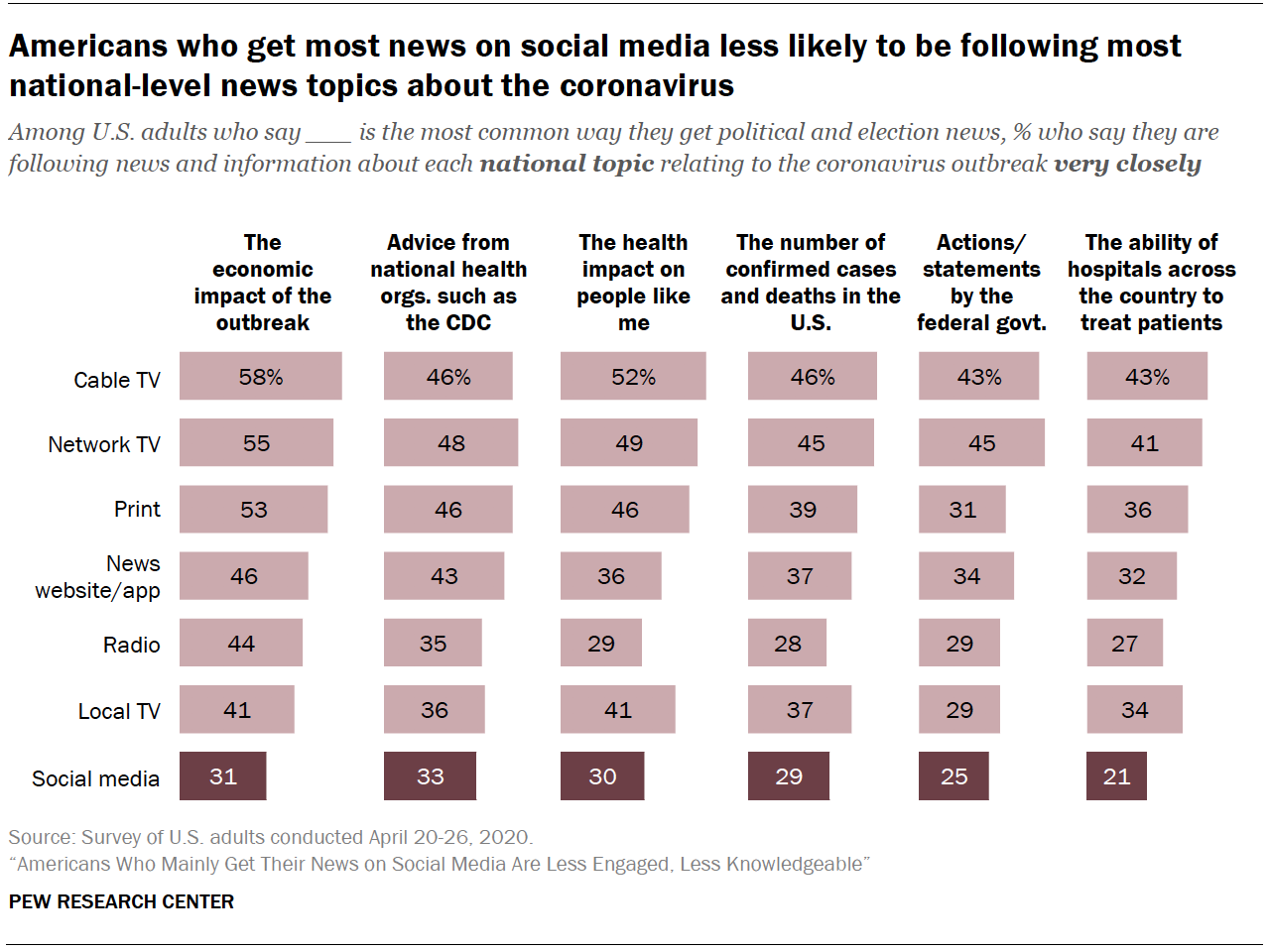 Another national coronavirus topic on which the social media group’s attention lags well behind others concerns the ability of hospitals across the country to treat patients. Only about one-in-five of those who rely on social media for news (21%) were very closely following that subject in April, fewer than for most other platforms.

The differences in levels of attention, based on which platform news consumers use most, were somewhat less substantial for local coronavirus news topics, but the social media group again was paying consistently less attention than most others.

On the subject of the availability of COVID-19 testing at the local level, 21% in the social media group were paying very close attention in April, lower than most other groups. Those in the social media group also were least likely to be closely following the actions and statements of state and local governments regarding the coronavirus. The 36% of those who rely on social media for news who were following that subject very closely trailed most other groups, including Americans who rely most on print (49%), network TV (47%) and cable TV (45%). 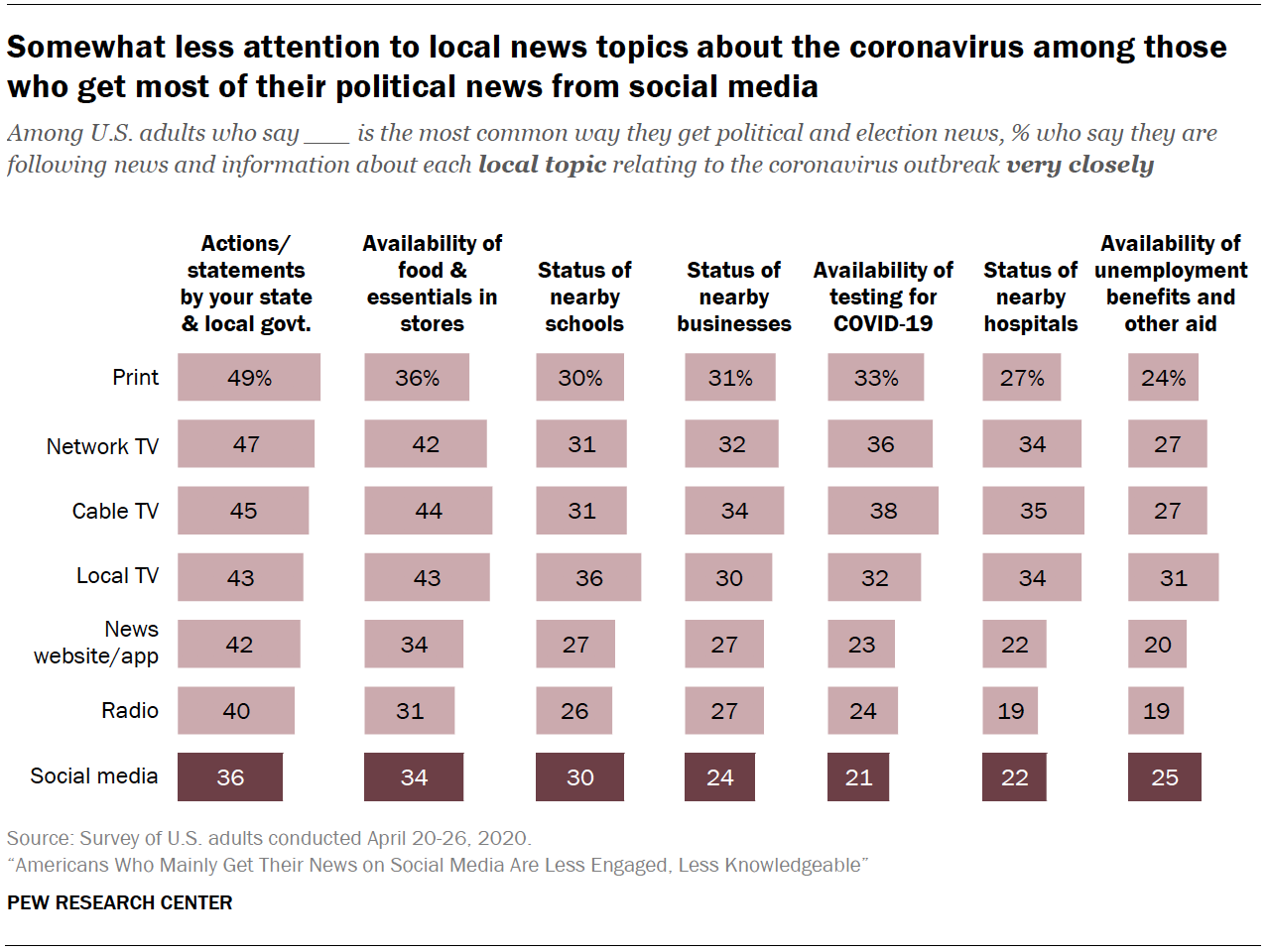