Pew Research Center’s American News Pathways project conducted this study to look at the group of Americans who get most of their political and election news through social media.

For this analysis, we used data from five different surveys conducted from October 2019 to June of 2020. The number of U.S. adults in each survey ranges from 8,914 to 12,043 U.S. adults. Everyone who completed the surveys is a member of Pew Research Center’s American Trends Panel (ATP), an online survey panel that is recruited through national, random sampling of residential addresses. This way nearly all U.S. adults have a chance of selection. The surveys are weighted to be representative of the U.S. adult population by gender, race, ethnicity, partisan affiliation, education and other categories. Read more about the ATP’s methodology.

See here to read more about the report’s methodology. 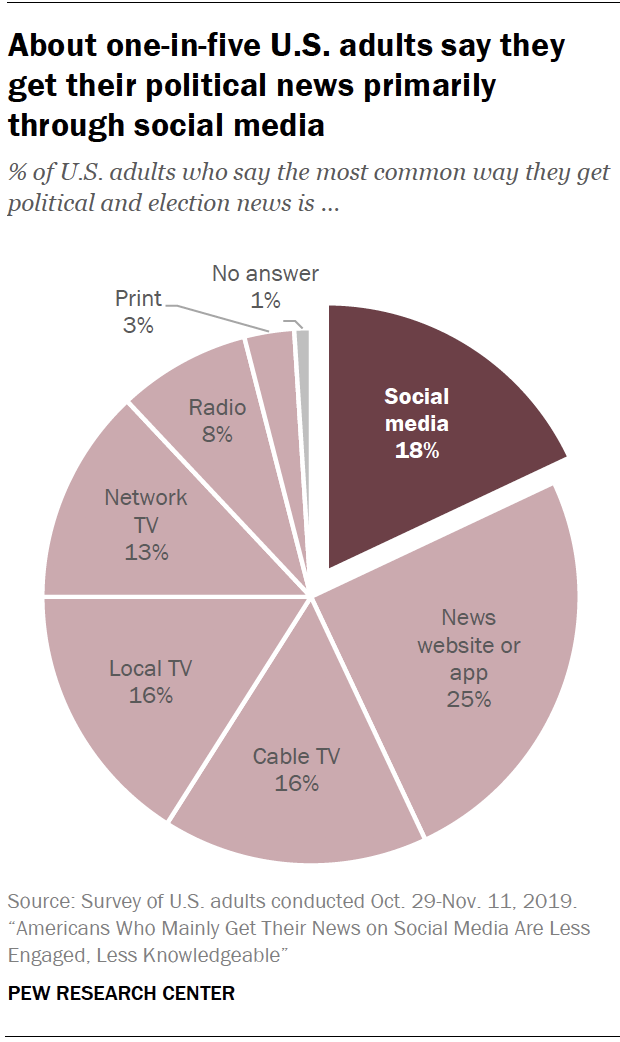 The rise of social media has changed the information landscape in myriad ways, including the manner in which many Americans keep up with current events. In fact, social media is now among the most common pathways where people – particularly young adults – get their political news.

A new Pew Research Center analysis of surveys conducted between October 2019 and June 2020 finds that those who rely most on social media for political news stand apart from other news consumers in a number of ways. These U.S. adults, for instance, tend to be less likely than other news consumers to closely follow major news stories, such as the coronavirus outbreak and the 2020 presidential election. And, perhaps tied to that, this group also tends to be less knowledgeable about these topics.

Through several surveys over the last nine months, the Center’s American News Pathways project has been exploring the connection between Americans’ news habits and what they hear and perceive about current events. One important aspect of this project is taking a deeper look at the pathways, or platforms, Americans use most often to access news – such as news websites or apps, social media, local, cable and network TV, radio, or print.

As of late last year, 18% of U.S. adults say they turn most to social media for political and election news. That’s lower than the share who use news websites and apps (25%), but about on par with the percent who say their primary pathway is cable television (16%) or local television (16%), and higher than the shares who turn to three other pathways mentioned in the survey (network TV, radio and print).

To further explore the influence of this relatively new entry into the news ecosystem, this report studies the characteristics of U.S. adults who rely on social media as their main pathway to political and election news, in comparison with the six other groups.

Demographically, U.S. adults who rely most on social media for news tend to be younger, are less likely to be white and have lower levels of education than those who mainly use several other platforms.

Overall, this group tends to pay less attention to news than those who rely on most other pathways. As of early June this year, just 8% of U.S. adults who get most of their political news from social media say they are following news about the 2020 election “very closely,” compared with roughly four times as many among those who turn most to cable TV (37%) and print (33%).

The only group with a level of engagement that is similarly low is U.S. adults who get their political news primarily from local television, 11% of whom are following election news very closely. This is a common thread throughout the analysis: The social media group and the local TV group are often comparable in their lower levels of engagement with and knowledge of the news.

But even compared with those who get their news from local TV, Americans who rely on social media are less likely to be following the biggest storyline of the year thus far – the coronavirus outbreak. Roughly a quarter (23%) of U.S. adults who rely most on social media for political news say they are following news about the COVID-19 pandemic very closely, according to the June survey. Higher shares in every other group say they are tracking the outbreak very closely, including those who get their news from cable TV (50%), national network TV (50%), news websites and apps (44%), or local TV (32%). 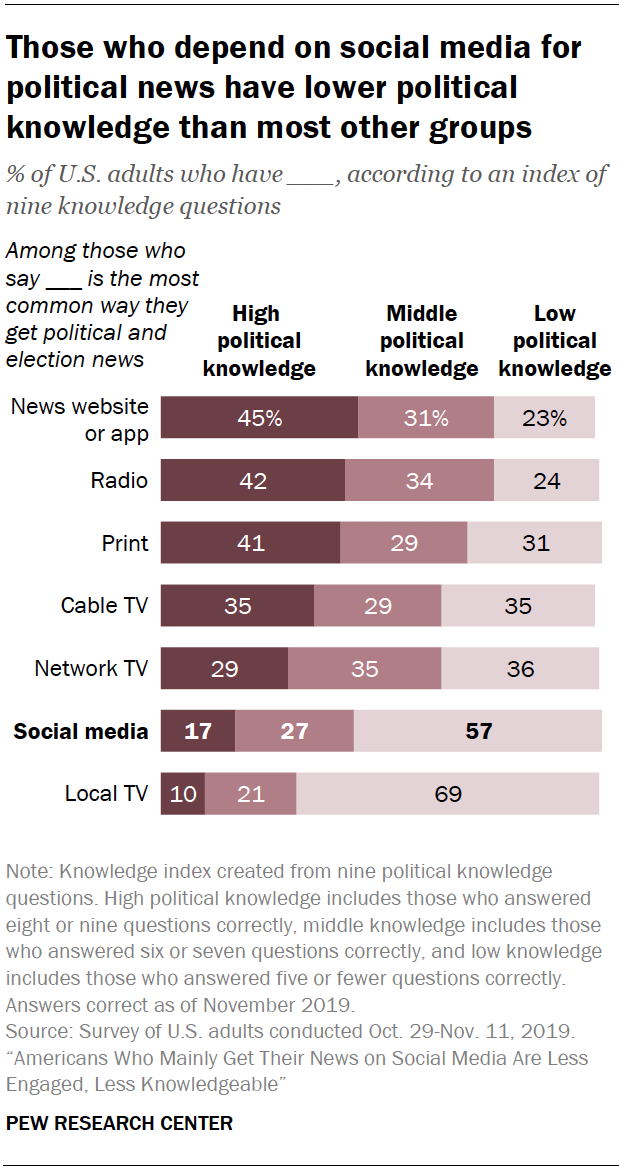 This relative lack of attention to news goes hand in hand with lower levels of knowledge about major current events and politics. Across the nine months of study and five separate surveys, respondents were asked 29 different fact-based questions that touch on a variety of topics related to the news, from economics to Donald Trump’s impeachment to the COVID-19 outbreak and more (see Appendix for details). Across these 29 questions, the average proportion who got each question right is lower among Americans who rely most on social media for political news than those who rely most on other types of news sources, except for local TV. 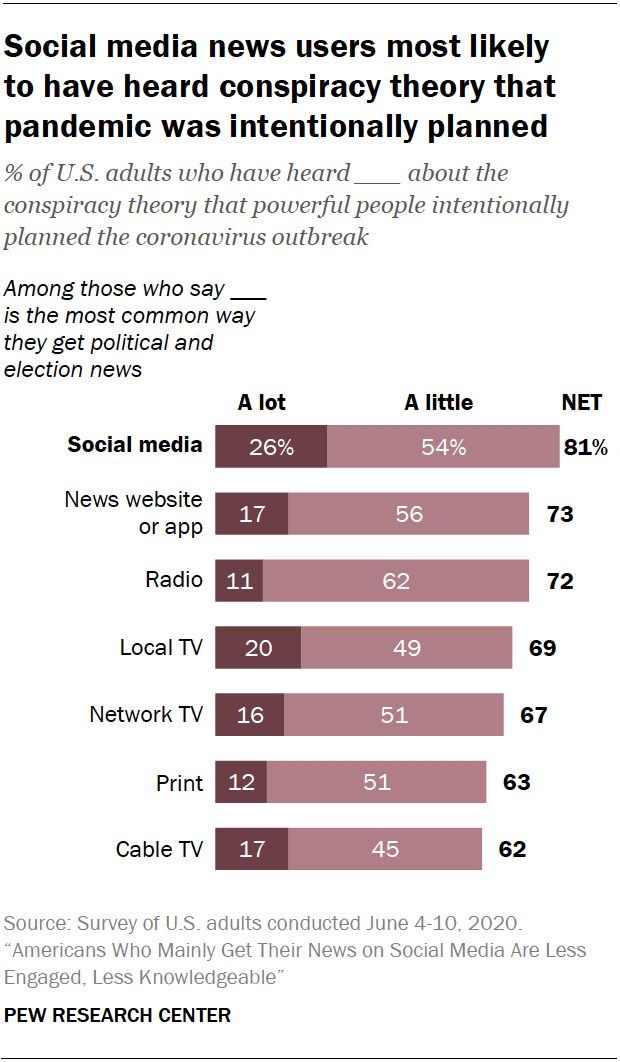 Even as Americans who primarily turn to social media for political news are less aware and knowledgeable about a wide range of events and issues in the news, they are more likely than other Americans to have heard about a number of false or unproven claims.

One specific example is exposure to the conspiracy theory that powerful people intentionally planned the COVID-19 pandemic, which gained attention with the spread of a conspiracy video on social media. About a quarter of U.S. adults who get most of their news through social media (26%) say they have heard “a lot” about this conspiracy theory, and about eight-in-ten (81%) have heard at least “a little” – a higher share than among those who turn to any of the other six platforms for their political news.

Despite this, Americans who get their political news mostly through social media express less concern about the impact of made-up news. Roughly four-in-ten of this group (37%) say they are very concerned about the effects on made-up news on the 2020 election, lower than every other group except for those who turn mainly to local television (at 35%). Those who rely on other platforms express higher levels of concern, including 58% of those who mainly turn to cable TV.

Next: 1. Demographics of Americans who get most of their political news from social media
← Prev Page
You are reading page1Page2Page3Page4Page5Page6Page7Page8
Next Page →

Americans Who Mainly Get Their News on Social Media Are Less Engaged, Less Knowledgeable
1. Demographics of Americans who get most of their political news from social media 2. U.S. adults who mostly get news through social media lag behind others in attention to election and pandemic news 3. U.S. adults who mostly rely on social media for political news are often less knowledgeable about current events 4. In addition to lower awareness of current events, social media news users hear more about some unproven claims Appendix: Knowledge questions used for average correct responses Acknowledgments Methodology