As the COVID-19 crisis continues to command Americans’ attention, views of the media’s performance and details about what people have seen or heard differ substantially depending on which sources they rely on most for news and information about the pandemic. 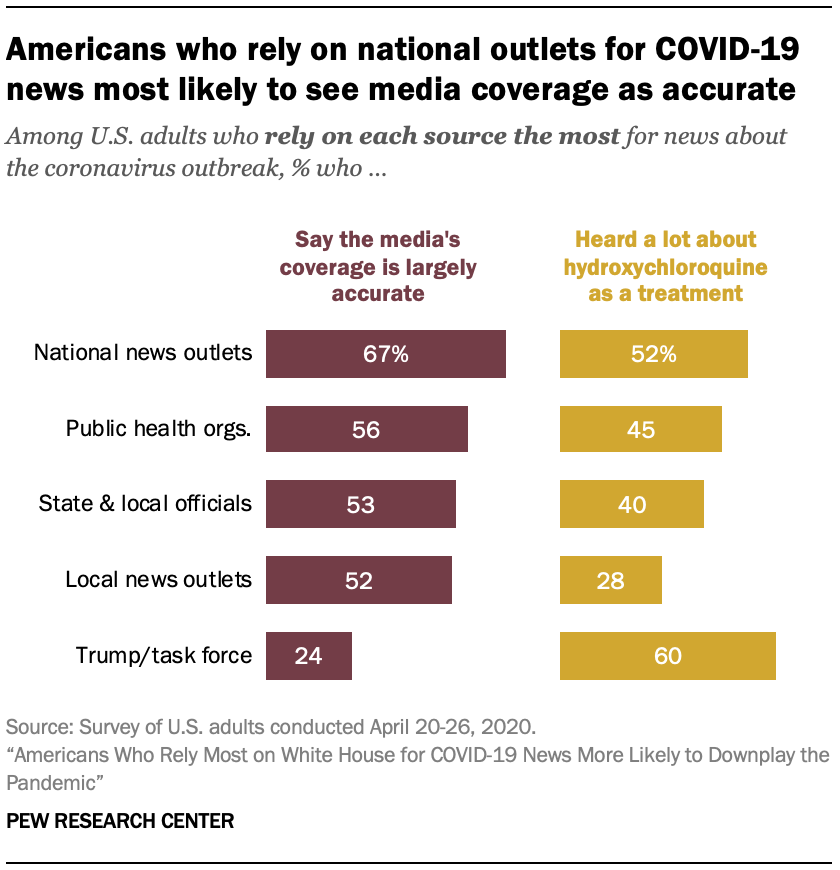 Among five groups of news consumers examined for this report, one group clearly stands out: Americans who rely most on President Donald Trump and the White House coronavirus task force for news about COVID-19. On each of seven questions concerning the media’s coverage of the COVID-19 pandemic, those who rely on Trump and the task force give, by a wide margin, the most negative assessments of any group, according to a new Pew Research Center survey conducted April 20-26, 2020, of 10,139 U.S. adults who are members of the Center’s American Trends Panel. Only about a quarter of this group (24%), for example, say media coverage of the outbreak has been largely accurate, while nearly three-quarters (72%) say journalists have been exaggerating the risks of the virus and that coverage has been too negative (73%).

Americans who rely most on Trump and the task force also stand out in the coronavirus topics they have been following and claims they are aware of. They are focusing more attention than other groups on the economic impact of the pandemic (with six-in-ten following that topic very closely) and the federal government’s response (49%). And six-in-ten also have heard a lot about the unproven claim that the anti-malaria drug hydroxychloroquine could be useful in treating the virus, a higher portion than any other group. 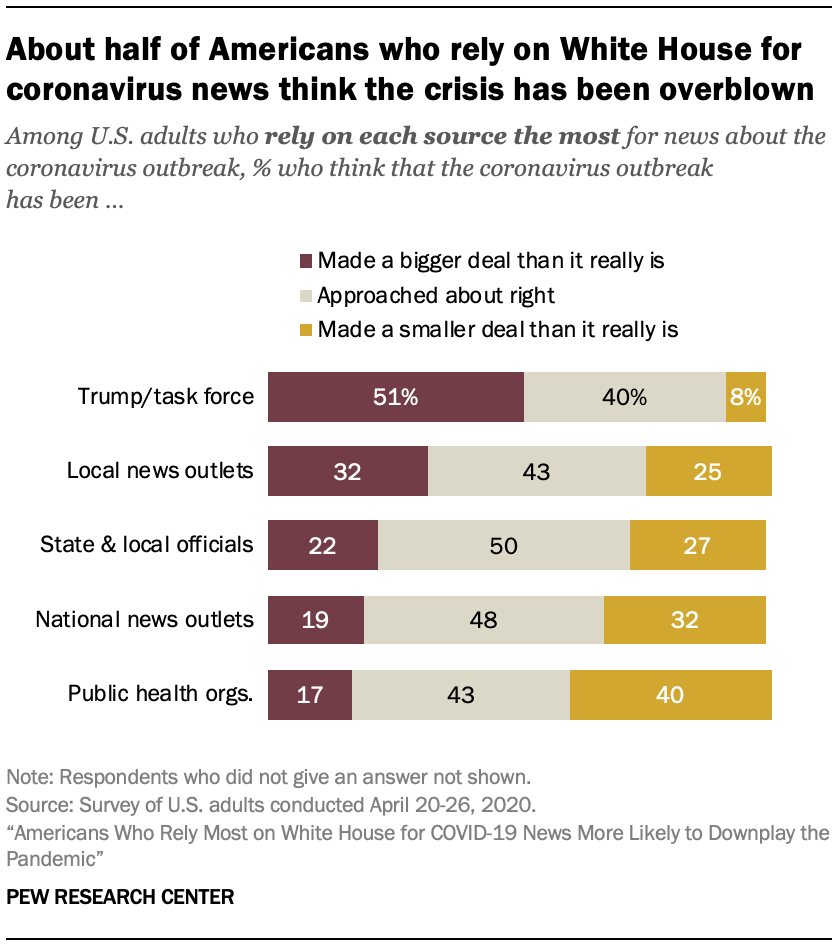 Overall, those who rely most closely on the White House for coronavirus news make up 16% of all U.S. adults. The group is almost entirely Republican or Republican-leaning (92% of this group, accounting for 32% of all Republicans), overwhelmingly non-Hispanic white (82%), and older than the public overall. Indeed, of all five news sources analyzed, those relying on the task force include the largest percentage of adults 65 and older (39%) – an age group especially vulnerable to the effects of COVID-19. It is worth noting that the views of people relying on the White House may be formed not only by what they hear from the president and his task force, but also by the information they get from other sources, their political ideology and party identification, life experience, and prior beliefs that they bring with them as an audience. 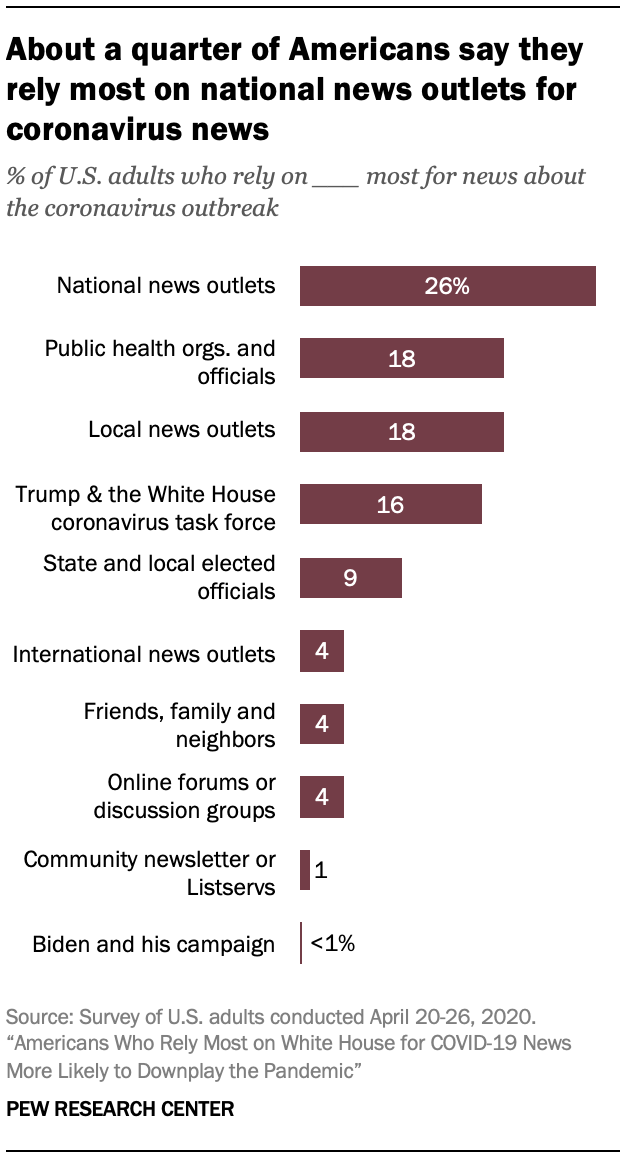 Certain characteristics emerge for these groups as well. Roughly four-in-ten Americans who rely on national news outlets – the largest group, at 26% of the public – hold college degrees (43%), which is about on par with those who rely on public health organizations (39%) but higher than for all other news groups. Those U.S. adults who mainly rely on public health organizations and officials are also relatively young: 26% are between 18 and 29. And the group that relies most on local news outlets has the highest percentage of racial and ethnic minorities, with nonwhite adults accounting for 45% of the group (including 16% who are black and 22% who are Hispanic).

In contrast to those who rely mainly on Trump and the task force, those who turn to national news outlets consistently give the news media high marks for their coverage. About eight-in-ten (83%) say the media have done “very” or “somewhat” well covering the outbreak. And nearly two-thirds of that group (64%) say the media’s coverage is helping the country, as opposed to hurting it, during the crisis. Still, the other groups – those who rely on public health organizations, local news outlets, or state and local officials – are all more positive in their assessments of the media than the group that turns to Trump and the task force.

Next: 1. How Americans’ main sources for COVID-19 news relate to their demographics, politics
← Prev Page
You are reading page1Page2Page3Page4Page5
Next Page →

Americans Who Rely Most on White House for COVID-19 News More Likely to Downplay the Pandemic
1. How Americans’ main sources for COVID-19 news relate to their demographics, politics 2. Americans who rely on Trump for COVID-19 news have the harshest views of media performance by far 3. Some claims about COVID-19 treatments reach certain news groups more than others Acknowledgments