To better understand the ways Americans get their news in the digital age, we surveyed 12,045 U.S. adults from March 8 to 14, 2021. Everyone who took part is a member of Pew Research Center’s American Trends Panel (ATP), an online survey panel that is recruited through national, random sampling of residential addresses. This way nearly all U.S. adults have a chance of selection. The survey is weighted to be representative of the U.S. adult population by gender, race, ethnicity, partisan affiliation, education and other categories. Read more about the ATP’s methodology. 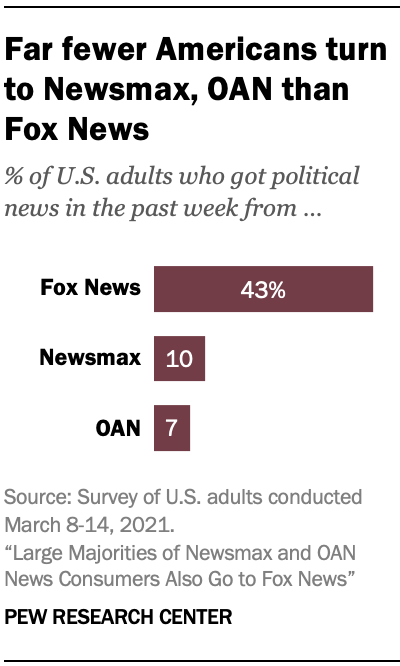 Last year witnessed the rise of Newsmax and One America News (OAN), two alternative media outlets seen as potential competitors to Fox News. But a new Pew Research Center survey finds that the long-standing cable superpower still has a much wider reach among both Republicans and Americans overall as a source of political news. In addition, while about three-in-ten Democrats and those who lean Democratic get political news from Fox, virtually none of them do from Newsmax and OAN, according the survey of 12,045 adults conducted March 8-14 on the Center’s American Trends Panel.

While Fox does well among its conservative Republican core audience, it is also used by substantial portions of Democrats and ideologically moderate and liberal Republicans, according to the survey. And it attracts roughly equal portions of White, Black and Hispanic Americans.

For their part, the much smaller Newsmax and OAN audiences are made up largely of older and White Americans and conservative Republicans.

Among Republicans, Fox News is a much more common source than Newsmax or OAN, and is more ideologically mixed. 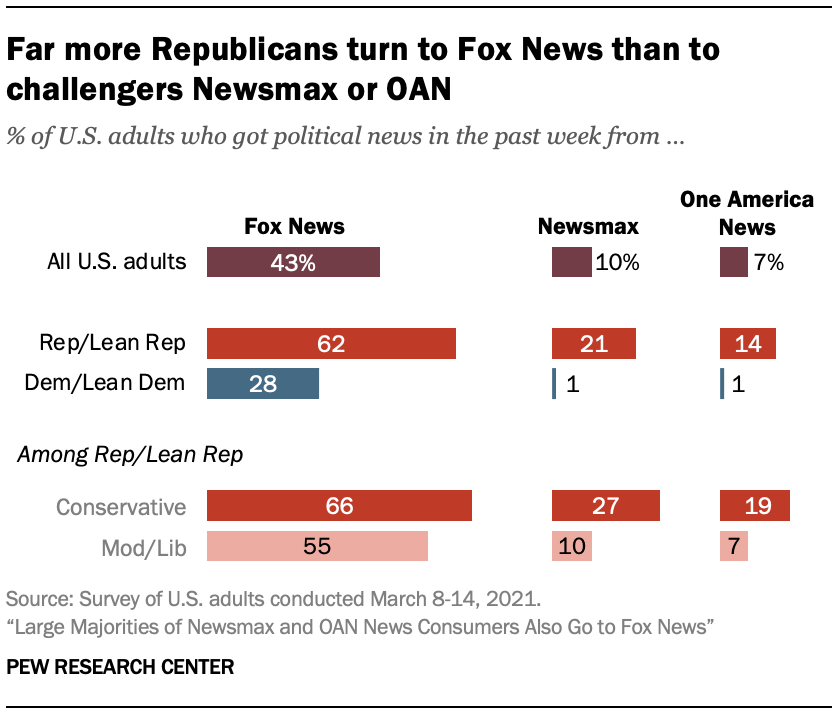 The Newsmax and OAN audiences are similar in size to the shares who turned to HuffPost (9%), The Hill (8%) or the Sean Hannity Show on radio (7%) for political news.

Following the 2020 election, questions arose as to whether these two newer and less established outlets were drawing Republicans who were angry about the election results and particularly angry with Fox News for being among the first media outlets to call the hotly contested state of Arizona for Joe Biden.

But the findings reveal that among Republicans, Fox News still far outpaces the other two. About six-in-ten Republicans and those who lean Republican (62%) got political news in the past week from Fox News, compared with 21% who said they got news from Newsmax and 14% who did so from OAN.

The results also indicate that Fox News appeals more broadly across the ideological spectrum in the Republican Party. While 66% of Republican conservatives got news from Fox in the past week, so did 55% of moderate and liberal Republicans. On the other hand, the smaller audiences of Newsmax and OAN are substantially more skewed to conservatives: 27% to 10% for Newsmax and 19% to 7% for OAN. 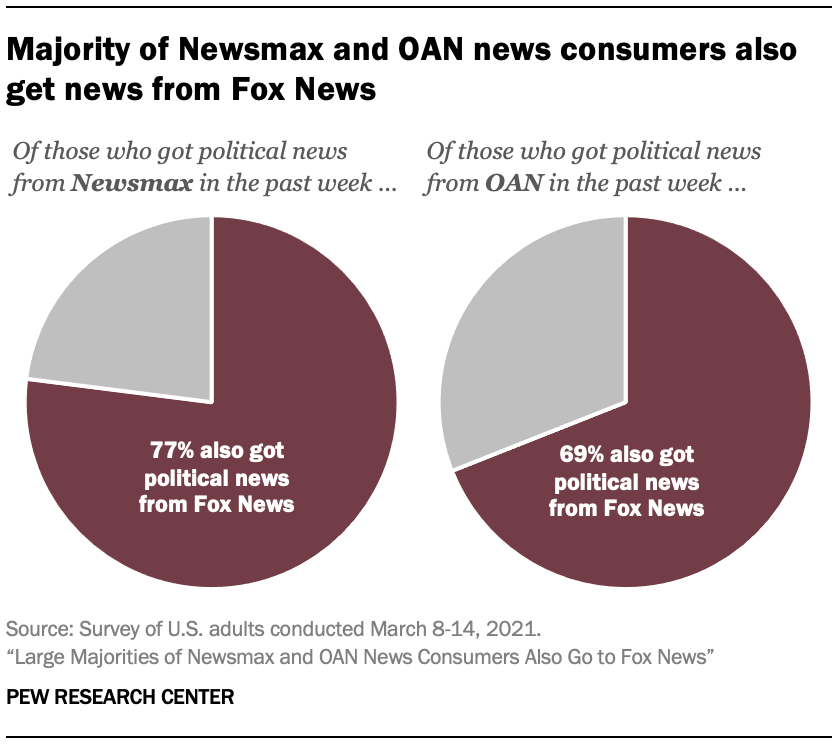 White and older adults more likely than others to turn to Newsmax and OAN; Fox News still pulls a larger audience across all demographic groups 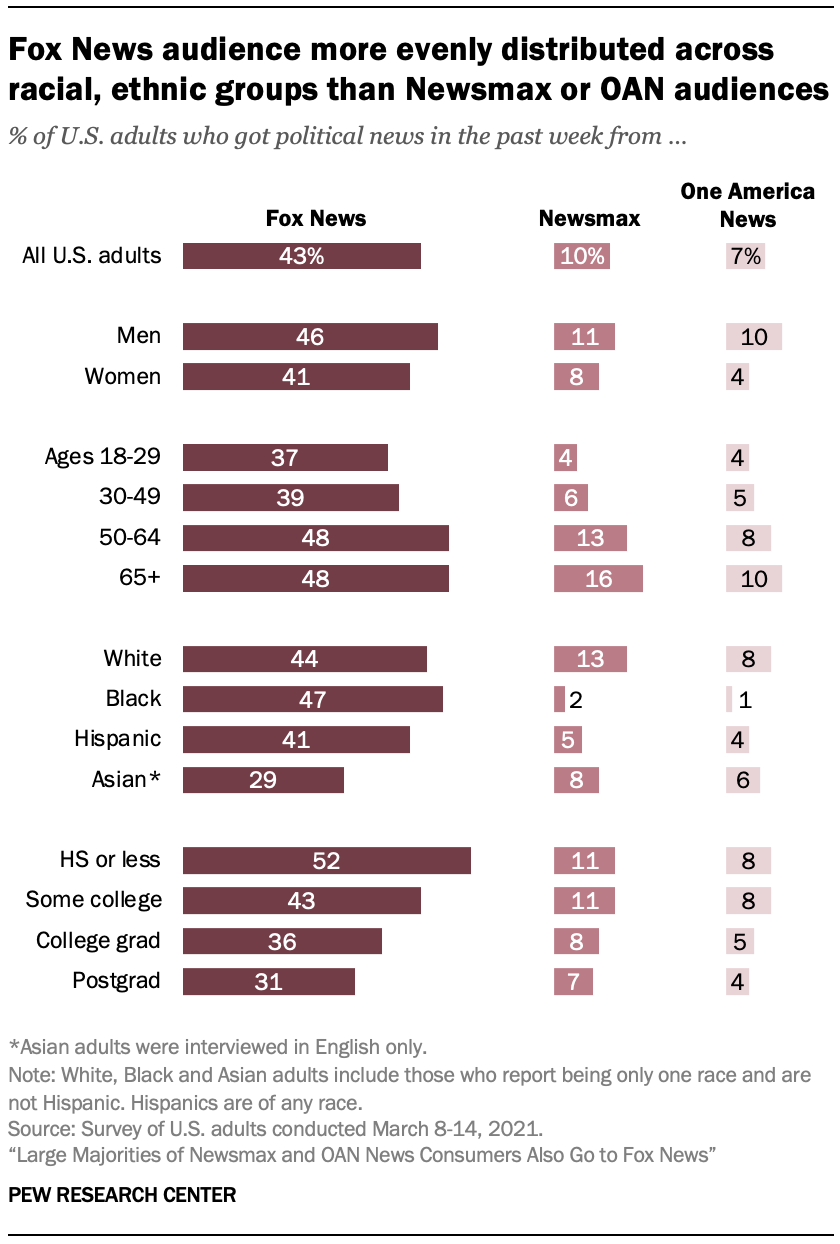 Newsmax and OAN, in turn, are more likely to attract certain demographic groups than others, with some groups aligning with the audience composition of Fox News and others diverging from it.

In contrast, Fox News draws roughly equal levels of audience across White (44%), Black (47%) and Hispanic adults (41%). Among Asian Americans surveyed, fewer (29%) said they got political news from Fox in the past week.

Broken down by age group, Fox News also skews older, commanding nearly half of users 50 and older. Still, unlike Newsmax and OAN, a sizable portion of younger adults still turn to Fox News for political news – roughly four-in-ten Americans under 50.

Finally, Fox News is far more likely to be turned to by Americans with less than a college education. Among those with a high school education or less, 52% got news from Fox News, followed by 43% of those with some college, 36% of college grads and 31% of those who did postgraduate work. Those differences by education are less pronounced for both Newsmax (ranging from 7% to 11% in the four groups) and OAN (ranging from 4% to 8%).

Large Majorities of Newsmax and OAN News Consumers Also Go to Fox News
White and older adults more likely than others to turn to Newsmax and OAN; Fox News still pulls a larger audience across all demographic groups
Acknowledgments Methodology