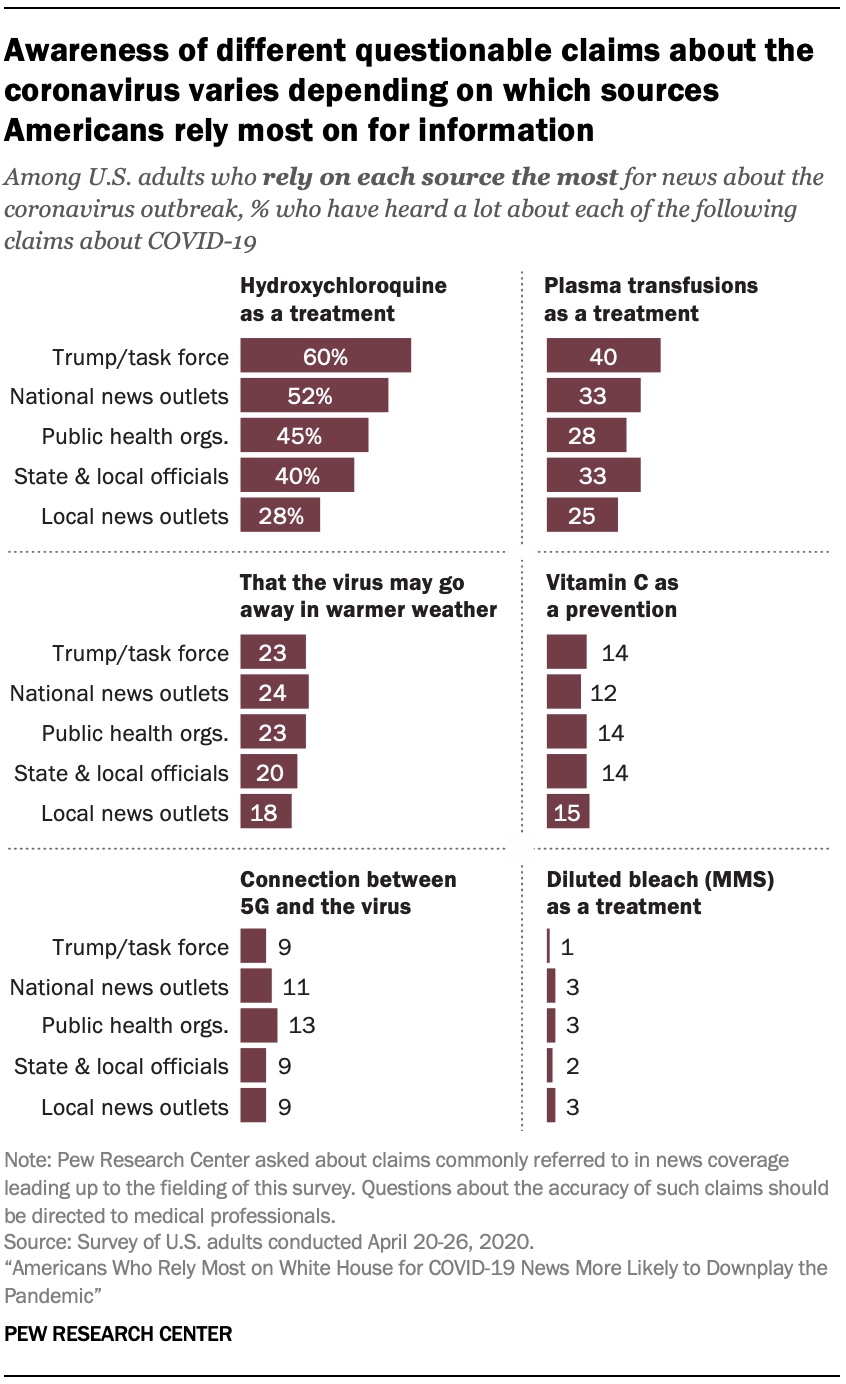 Within the near-constant flow of coronavirus news and information has been a stream of claims about possible treatments, causes or ways to end the outbreak – some with spotty evidence, some closer to speculation and still others deemed by experts to be actively dangerous. The survey asked about six of these claims to get a sense of how widely they have reached news consumers across the United States. Two of them in particular vary based on the sources people say they rely on most for coronavirus news.

Fewer differences by news source emerge around the four less commonly known claims, including that warmer weather could make the virus go away, or that there is a connection between coronavirus and 5G cellphone technology. And very few in any group say they have heard a lot about the idea of using diluted bleach as a treatment. (The majority of the survey was completed before Trump’s comments about using disinfectants to treat the virus on April 23.) 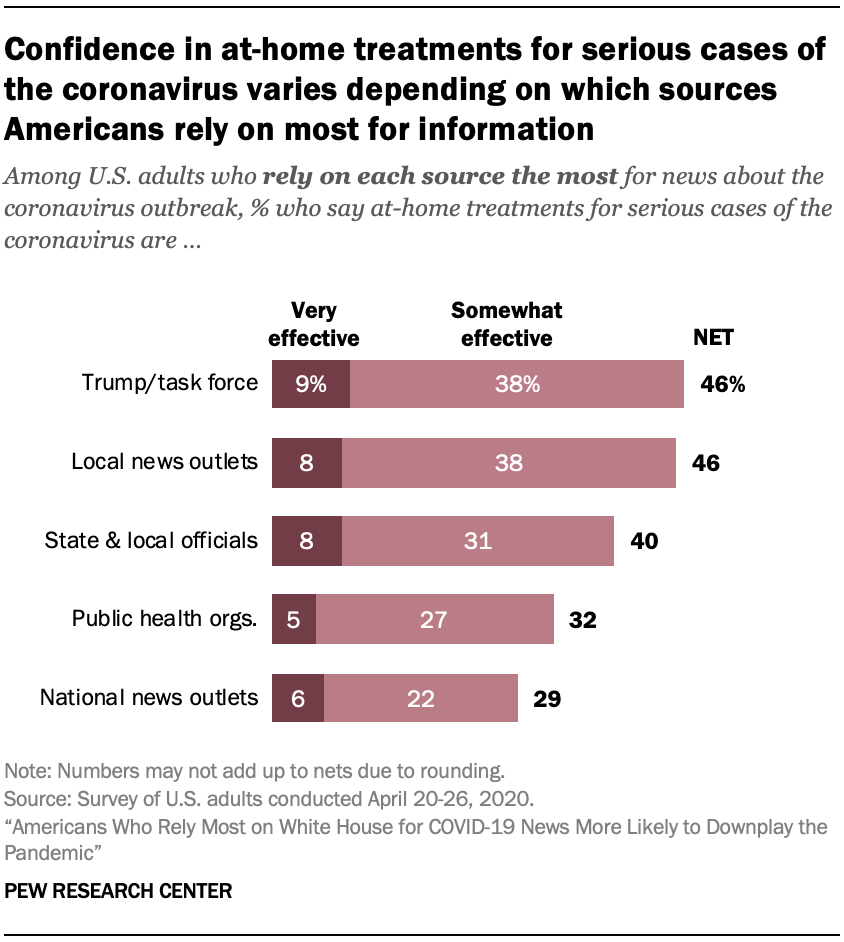 All in all, those who rely most on Trump and his task force and who rely on local news outlets place high levels of belief in the effectiveness of at-home treatments for serious cases of the coronavirus. Close to half (46%) of people in each of these groups say they think at-home treatments for serious cases are “somewhat” or “very” effective. That compares with closer to three-in-ten among those who rely most on public health officials (32%) or national news outlets (29%).

Americans overall are closely following a wide range of topics related to the coronavirus outbreak, with those issues varying depending on people’s primary news source.

Among those whose main sources of COVID-19 news are public health organizations and officials, it figures that most (60%) say they very closely follow news about current guidance from the CDC and other health organizations. About four-in-ten in this group say they are very closely following the health impact of the virus on people like them (42%), the economic impact of the outbreak (41%) and the number of confirmed cases and deaths (41%).

Those who rely most on Trump and his task force express greater interest in keeping up with news coverage of the economic impact of the outbreak, with six-in-ten following this topic area very closely. About half (49%) report very closely following federal government actions and statements related to the virus.

Other groups tend to most closely follow the economic impact of the coronavirus outbreak and the “health impact of the coronavirus on people like me.” Around half of people who turn most to national news outlets follow each of these topics very closely. Those who rely most on state and local officials and local news outlets for COVID-19 news are less likely to closely follow some of the national topics but are more interested in certain local topic areas. For example, those who rely most on local news outlets or state and local officials for coronavirus news are more likely than other groups to say they are very closely following news about the availability of food and other essentials in stores. (You can see the full list of local topics asked about in the data tool.) 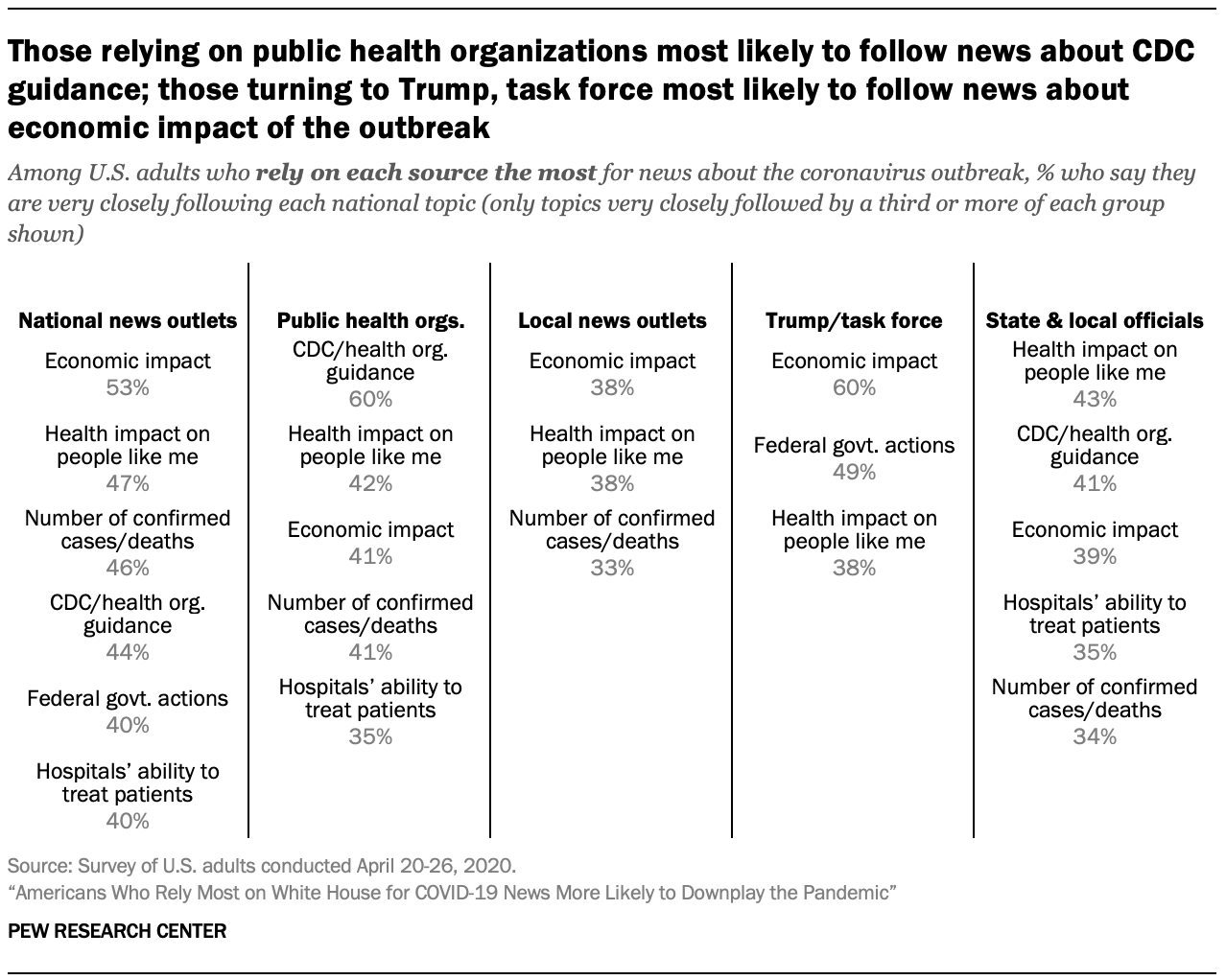 Next: Acknowledgments
← Prev Page
Page1Page2Page3You are reading page4Page5
Next Page →

Americans Who Rely Most on White House for COVID-19 News More Likely to Downplay the Pandemic 1. How Americans’ main sources for COVID-19 news relate to their demographics, politics 2. Americans who rely on Trump for COVID-19 news have the harshest views of media performance by far
3. Some claims about COVID-19 treatments reach certain news groups more than others
The coronavirus issues Americans are following differ depending on which source of news they rely on most
Acknowledgments