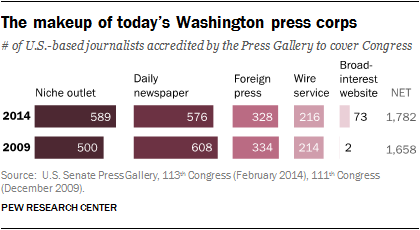 The cohort of journalists covering Washington affairs, from Congress to the White House and other federal agencies, continues to evolve. 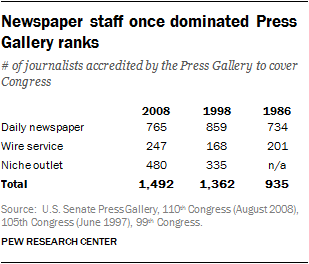 Reporters working for specialty publications often catering to elite audiences, labeled “niche” outlets in this report, have risen in number. So too have journalists working for publications that were born on the web – newer arrivals to the capital – called “digital-native” outlets here.

Meanwhile, the number of journalists working for daily newspapers has continued to dwindle, though not as dramatically as during and after the recession of 2008.

This analysis updates a study produced by Pew Research Center in 2009. Since that time, the total size of the Washington press corps has changed relatively little, though the ranks of those who fill the Senate galleries continue to change.

Next: 2. The numbers overall
← Prev Page
Page1You are reading page2Page3Page4Page5Page6Page7Page8Page9Page10
Next Page →

Today’s Washington Press Corps More Digital, Specialized
1. The journalists covering Washington and whom they work for
2. The numbers overall 3. The further rise of niche and digital media 4. Newspapers and wire services: a strained link from Washington to local communities 5. Foreign press on the Hill - a slight decline 6. Broadcast news outlets 7. Who provides coverage of the federal government to local communities 8. How it all adds up for the reader 9. The role of wire services Acknowledgements Methodology